The red-band trailer for the Coen Bros.’ Burn After Reading (Focus Features, 9.12) tells you it’ll almost certainly be — surprise! — a dry, deadpan thing mixed with broad slapstick, and probably hilarious. My favorite aspect, though, is the photography by Emmanuel “Chivo” Lubezski, whose legendary work on Children on Men was passed over last year for the Best Cinematography Oscar. A larger version. 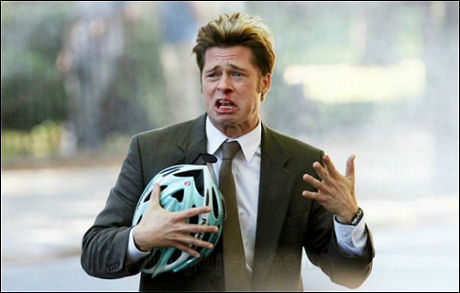 Cafe Charbon, a beautifully preserved (late 19th Century) bar in the Menilmontant district, was an absolute madhouse an hour or so ago. Insane. My return flight leaves tomorrow morning around 10:15 am, putting me back on JFK terra firma around noon. 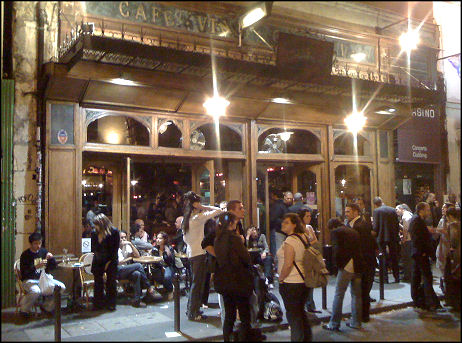 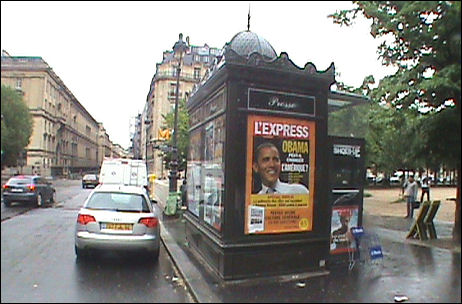 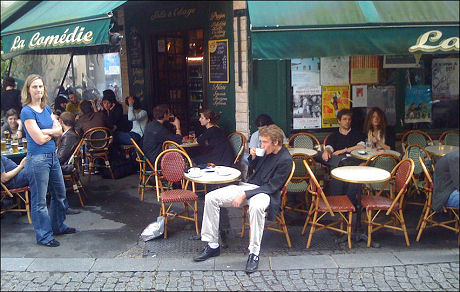 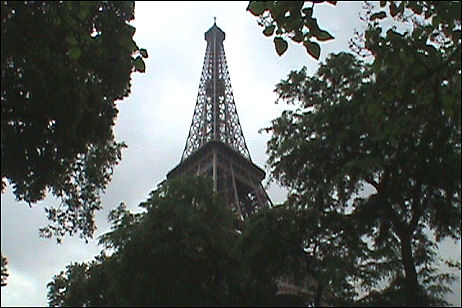 Huffington Post‘s Hillary Rosen has reported that at last night’s “All Things Digital” conference in Carlsbad, California, media bigwig and staunch conservative Rupert Murdoch said that Barack Obama “is a rock star…I love what he is saying about education [and] I think he will win and I am anxious to meet him.”
John McCain, he added, “is a friend of mine. But I think he’s got a lot of problems. He has been in Congress a long time, and you have to make a lot of compromises. So what’s he really stand for?… I think he has a lot of problems.”

Early yesterday evening on the way to meet friends for dinner in the 17th.

My idea is this: Eddie Murphy shouldn’t return as “Axel Foley” proper in the new, Brett Ratner-directed Beverly Hills Cop flick (the fourth), which will shoot sometime next year and come out in 2010. He should play Axel gone to seed, as a 375-pound prosthetic fat-ass. I know that Ratner and the team have to do something for the film not to seem like a creaky retread, and this would be that.

Houston, we have a problem. They can’t just put it all into a bag, take a space walk, give it a toss and let it float away? 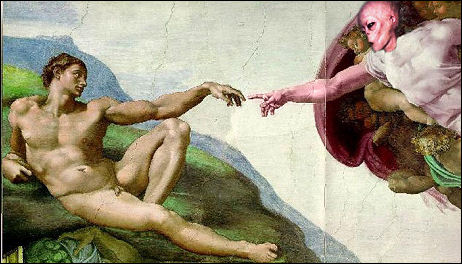 From this Matt Gross “Frugal Traveller” piece in the 5.28 N.Y. Times about doing Paris on a budget, a term I haven’t used before — “bobo,” which means bourgeois bohemian, as in ostensibly funky, soulful and tourist-free but not really. I should have popped out by now, being in the Urban Dictionary and all. Some of us are slower than others.

First there was Scarlett Johansson as

In honor of the not-quite-15th anniversary of True Romance (it opened on 9.10.93 in the States, and 10.15.93 in Great Britain), Maxim has spoken to the principals — director Tony Scott, screenwriter Quentin Tarantino, stars Christian,Slater, Patricia Arquette, Gary Oldman, James Gandolfini, Dennis Hopper, et. al. — and assembled some good material.

Scott: “When I was directing The Last Boy Scout, my assistant was hanging out with this quirky guy named Quentin Tarantino, and he’d d be around the set. She said, ‘You gotta read his script.’ I said, ‘Yeah, right.’
Tarantino: “When you’re a nobody, it’s murder to get anyone to read your scripts. So my thing was making the first page fantastic, with dialogue that grabbed you right away. The original True Romance script started with a long discussion about cunnilingus. Most people said the script was racist and that the grotesque violence would make people sick. I told Tony, ‘Read the first three pages. If you don’t like it, throw it away.'”
Scott: “He gave me two scripts: True Romance, which was his first script, and Reservoir Dogs. I’m a terrible reader, but I read them both on a flight to Europe. By the time I landed, I wanted to make both of them into movies. When I told Quentin, he said, ‘You can only do one.'”

Sarah Jessica Parker‘s Carrie Bradshaw “is the worst human being ever,” declares MCN columnist Noah Forrest in a longish piece about his mixed feelings towards HBO’s Sex and the City series, which carry over (trust me) into the film. “Hyperbole? Sure, but there’s a lot of truth to that statement and it has very little to do with how much Carrie has affected women all over New York City (I swear if I see one more dress with a bushy tail on it…) and everything to do with how she treats her friends on the show.

“My overarching feeling when I look back on all of the [HBO] episodes is that she is a selfish, self-centered opportunist with no regard for anybody else. She is the worst kind of ‘independent’ woman, [one] who loses herself in every relationship she becomes involved in and loses touch with all of her friends every time she enters into one of those relationships.
“It’s a problem that Carrie is a materialist too, but that is more of a societal issue because women look up to her and see her as something of an icon or role model. It’s amazing that some of the show’s most ardent supporters are women under the age of majority. I suppose it’s not the show’s fault, but if I were the producers I would wonder why my show about thirty-something women — and especially my main character — appeals so strongly to teenage girls.
“There are a lot of profound problems with the show, starting with its betrayal of its own premise: it purports to be about four single thirty-somethings who don’t necessarily eschew relationships in general, but find that they don’t need a man to prove their worth. At the end of the series, each woman has settled down with wealthy or handsome men (and in Carrie’s case, both). Maybe these gals didn’t love their beaus because of their wealth or their looks, but they sure were wealthy or they sure were good looking. The central thesis of the show is thus deflated by the final bow, which essentially says: sure, you can be happy on your own but it is better to have someone who can buy you shoes instead of buying them yourself.
“That is not to say that fantasy is a bad thing, but you don’t want to read a fairy tale and have the unicorn die of leprosy; no, you want the unicorn to fly, or whatever it is that unicorns do. The point being: Samantha’s character is a fantastical extrapolation of what a woman’s life could potentially be if she eschewed relationships with men in favor of casual sex. She also happens to be a world-class PR gal that is as much a tiger in the boardroom as she is in the bedroom.
“Is it possible this kind of woman exists? Yes, of course. But Samantha is designed as a character for a television show and isn’t a real person and what she was designed for was to be the logical conclusion of a life built around freedom and drive (both career-wise and sexual). She is like the female Gordon Gekko, except she would be more apt to say, “sex√É¬¢√¢‚Äö¬¨√Ç¬¶is good.”
“The bottom line is that to have that character settle down, no matter what the reason, takes away the fantasy that the show has created. It takes that option away from the multitudes of women who watched the show and thought to themselves, ‘wow, I wish I could be more like Samantha,’ and instead reduces them to saying, ‘wow, I wish I had a boyfriend like Samantha’s.'”