The new JibJab presidential campaign spot (which aired on Leno last night) is a retrograde, woefully cornball, second-tier thing at best. “My Land” was a huge phenomenon four years ago, but this time out the JibJabbers guys are mainly trying to recycle and photo-copy. What kills it for me is (a) a yokel-cornball streak a mile wide and (b) a sophmoric and simplistic anti-Obama attitude. 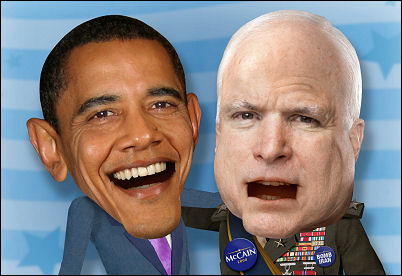 The new spot is called “Time For Some Campaignin'” (a riff on Bob Dylan‘s “The Times They Are A Changin'”). The rhetorical point is that politicians do the same dance every year, telling us what we want to hear, and we pay for it to the tune of billions. Generically cynical, no edge or innovation, over and out.
Flaw #1: they’ve used a twangy-ass banjo again, aping the country tone of the “My Land” spot. Flaw #2: the JibJab guys have no specific Barack Obama vs. John McCain point to make except for a standard contest of a hearts-and-flowers liberal vs. a snarly-voiced warmongering conservative, which is a fairly sloppy observation at this stage of the game. Flaw #3: a good 50% to 60% of the spot uses old or so-what? material — i.e., the Bushies are on their way out, a recap of Hillary’s failed campaign (an allusion to her 2012 ambitions, Bill’s randy-ness with a Monica-resembling brunette) and so on. Flaw #4: it depicts Obama as a Snow White or Bambi fantasist living in an animated Polyanna world — an allusion to the criticisms of his “Yes We Can!” phase that BHO didn’t offer specific policies — which shows the spot to be at least three or four months out of date. Flaw #5: the guy who voices Obama doesn’t sound like him in the least. Flaw #6: the guy who voices McCain sounds like a mixture of Brian Dennehy, Louis Armstrong and Foghorn Leghorn.
And the interactive online software that supposedly allows you to put your own head shot in the animated cartoon doesn’t work. I clicked on the damn green button eight or nine times.