An absolutely terrible-looking video of The Wrestler‘s Mickey Rourke and Milk‘s Sean Penn thanking the Boston Society of Film Critics for the “discerning indecisiveness” that resulted in the org splitting the Best Actor award between these two. The BSFC ceremony was held at the Brattle Theatre on 2.8.09, the video was posted on 2.10.

Last night I paid to see Tom Tykwer‘s The International, having missed the Manhattan press screening. And I knew right away that the downish critical response (Rotten Tomatoes ratings of 52% and 55% from the rank-and-file and creme de la creme, respectively) was at least somewhat unfair and inaccurate. 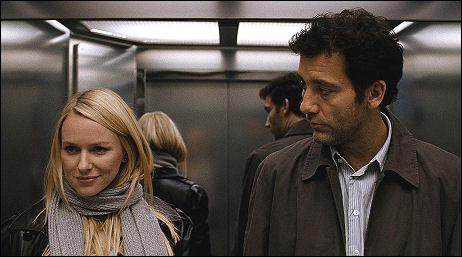 This is a pretty nifty shot when you consider that the rear-wall glass should but doesn’t reflect the presence of a camera in front of Watts and Owen. Very nice CGI, this.

For The International is another smart and mostly satisfying “tween.” A thriller that isn’t (as someone else has already said, I’m sure) a Bourne thing but not a LeCarre-type deal either. And yet it’s not half bad on its own terms until the tension slackens and a kind of manic action vibe takes over during the final 25%.

You could call The International an old-fashioned ’70s thriller that tries, yes, to ape the moody paranoid vein of Alan Pakula‘s The Parallax View — unsuccessfully — and yet one that benefits from a sensible and modest approach, no-nonsense direction, solid performances (particularly from Clive Owen and supporting players Armin Mueller-Stahl and Brian F. O’Byrne), nicely aromatic Euro-backdrops and an agreeably tidy, well-ordered script by Eric Warren Singer.

Some of the popcorn munchers in theatre #13 at the AMC Empire were laughing and hooting during that final 25%, though. A guy sitting behind me began loudly tapping his feet on the floor and complaining to his friend. The International feels a little too literal and earnest in the final laps, agreed, but it doesn’t deserve cat-calls. I wasn’t about to stand up and say “will you guys shut the fuck up?” but I was definitely thinking about this. I was close but I wimped out. Which at times has been the story of my life. 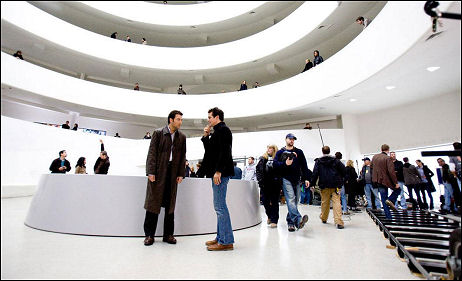 There was this corpulent black kid sitting three seats to my left whose main activity was eating popcorn and candy and slurping down his 48-ounce drink. This 11 year-old African-American beach balloon took his jacket off and then put it back on and then took it off again, chatted with his Jabba-sized mom and dad incessantly, and hit the bathroom (or took a video-game break) twice. The more this little junk-food eating machine failed to watch, much less appreciate, what was going on the screen, the more allegiance and affection I felt for The International.

The International is about a sociopathic bank, called IBBC, that we soon discover is into all kinds of unsavory criminal fundings. IBBC is an anagram, of course, for the real-life BCCI, which flourished in the ’70s and ’80s before getting caught up in a criminal investigation in the early ’90s. The bank’s relationship with underworld elements led to the nickname “Bank of Crooks and Criminals International.”

Anyway, it’s about an unshaven, tie-less and tireless Interpol agent (Owen) who’s determined to expose the IBBC’s malignancy, particularly its pattern of offing anyone who may have the goods and rat to the authorities. The timing of having a bank as a “bad guy”, of course, is perfect. “This is the essence of the banking industry,” one character says early on, “to make us all slaves to debt.” Right. 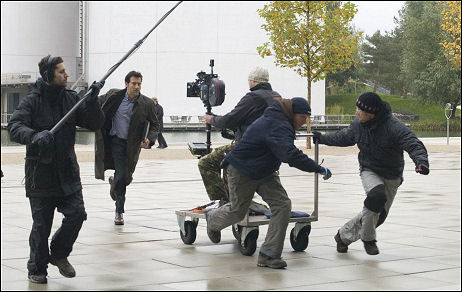 Early on Owen picks up an investigative ally in the New York D.A.’s office, played by Naomi Watts. Every time they get close to talking to someone who might offer proof of the IBBC’s ties to terrorism and gangsters, the whistle-blower, of course, gets offed. Even a hired Irish hitman (O’Byrne) who’s done some of the offing winds up dodging bank bullets.

But The International is into working with you rather than fucking with your head, so you can follow what’s going on without a great deal of effort. The script goes from point A to B to C and on down the logical line. There’s something very pleasurable and ’70s-like about this. It kept me aroused but made me feel relaxed at the same time. Until, that is, the final portion, at which point the exposition started to feel a little ploddy. A voice inside began to say, “C’mon, c’mon…we need more than just this!”

The International begins to fall apart right after the peak action sequence — an automatic weapons shoot-out at Manhattan’s Guggenheim Museum. But up until that point it’s an almost completely satisfying medium-grade thriller. That is, if you’re like me and not like one of those wildebeest assholes in theatre #13 last night.

The Parallax parallel is in the view — the final resolution, in fact — that taking down today’s nefarious evildoers just isn’t within the power of an impassioned good-guy protagonist. However true or untrue that may be, this isn’t a very satisfying way to end a thriller.

Meanwhile, Slumdog Millionaire‘s dp Anthony Dod Mantel has been handed the top prize by the American Society of Cinematographers.

And WALL*E, Slumdog Millionaire and Man on Wire have taken three choice ACE Awards for editing.