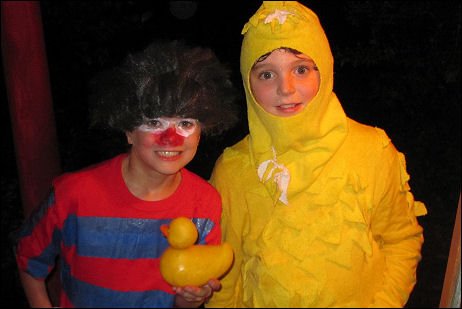 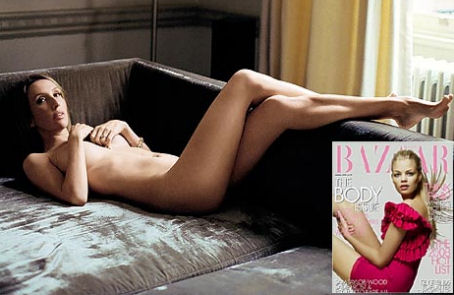 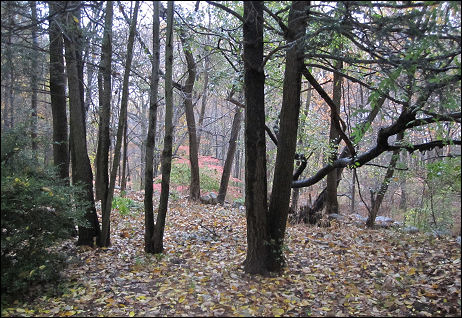 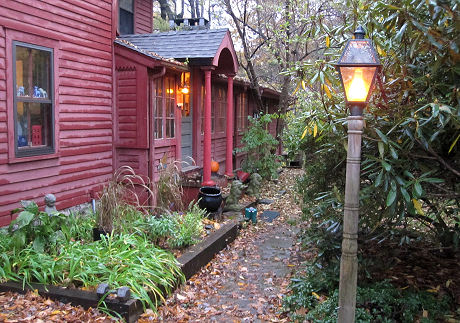 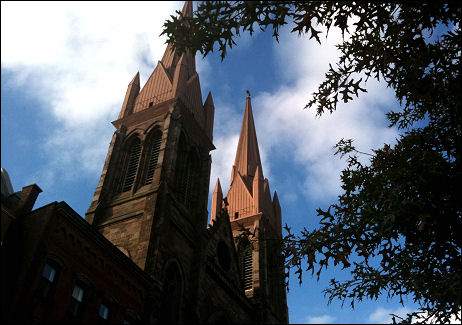 “When Academy of Motion Picture Arts and Sciences president Sid Ganis announced the expansion of the best picture category to 10 nominations back in June, everyone was talking about J.J. Abrams’ Star Trek being the kind of movie that might benefit from a wider field,” writes Variety‘s Glenn Whipp. “Critics liked it; audiences loved it: It was the type of sturdy popcorn movie that, if nominated, might give the awards telecast a ratings boost — or, at least, stem further viewer erosion.

“Now, as Oscar season kicks into gear, nobody is talking about Star Trek much anymore. And, as audiences and Academy members have seen most of the Oscar contenders, a vague sense of discomfort hangs over Hollywood as some naysayers wonder how they might possibly fill out a ballot that now includes 10 slots.

“‘This is not 1939,’ says one Academy member, who like most people interviewed for this story, asked not to be identified. ‘I’m just not seeing stuff that’s blowing me away, and it’s October. When the year began, I was hoping for masterpieces. Now I’d just take a good midrange drama, and I’m not even getting that.'”

Due respect but what is this person talking about? 1939? As in what happened to good old David O. Selznick, Victor Fleming, John Ford and Michael Curtiz?

The Academy is full of people who live in a kind of denial-prone nostalgia bubble who won’t give in to serious enthusiasm about any film unless “the waitress takes you into a back room and sucks your dick,” to borrow a line from Reservoir Dogs. Has this guy seen Up In The Air, The Hurt Locker, An Education, A Serious Man, Bright Star, District 9, etc.? I’ve heard this complaint year after year. I know what these guys want from a film. They want something grand, bold, devastating. An experience that will melt them down, lure them into a Godly embrace, inspire them to run out and hug their kids. A movie to go “wow!” about with your friends in the lobby and make everyone do cartwheels. Or that…you know, will bathe them in a soaring orchestral score by James Horner or whatever.

In short, they want the kind of high-pedigree, finely-fused emotional bath movie that the major studios used to try to make but began abandoning in the ’90s, and have now pretty much given up on. They’re investing in Guy Ritchie movies for December release these days, and Guy Ritchie ain’t Sidney Lumet or Mike Nichols or David Lean. Well, the save-us-from-disappointment crowd had better get with it. They’d better wake up and smell the cappucino. The reality is that the Oscars have pretty much become the Spirit Awards in tuxedoes and designer gowns. That’s the world we’ve all created and are living in. I for one am down with that, but some people are beyond reach.

“Anyone can formulate a personal version of heaven — an aerie of angels, a tropical getaway, a cloister with 72 virgins, a sports bar with unlimited beer and bigscreen, or an ethereal place where you could mingle and chat with everyone from Socrates to Groucho Marx,” Variety‘s Todd McCarthy wrote in a 10.22 column. “Last week I discovered the closest approximation of paradise I can imagine for the hardcore film buff at the Grand Lyon Film Festival in the center of France. 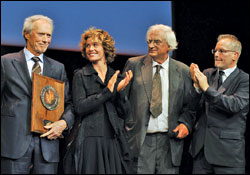 “This six-day event was defined by three elements: reliably fine films, incredible food and good, smart people to share both with. This setting afforded attendees a state not of ecstasy, perhaps, but of a consistently high mellowness.

“The St. Peter of this blissful environment was Thierry Fremaux. Though Fremaux is best known to the world as major domo of the Cannes Film Festival, his professional base has long been his native Lyon. There, working with fellow Lyonnois Bertrand Tavernier, he has been director of the Institute Lumiere, a superbly administered shrine to the fathers of cinema, Auguste and Louis Lumiere. The brothers’ stately home is maintained as a beautiful museum devoted to the movies’ earliest days in the 1890s; right next to it is an intimate modern cinema where the institute runs an outstanding year-round screening schedule of classics, strongly contributing to the city’s conspicuously avid and film-literate population.

“The new film festival could accurately be called ‘Cannes Classics X 10,’ a notable magnification of the annual Cannes sidebar Fremaux initiated to spotlight the latest in global archival restorations. Part of Lyon’s charm is that it doesn’t show bad films. The reason is that it doesn’t show any new ones, except for the odd documentary about cinema subjects.

“In the fest’s inaugural year, two of the major retrospectives were devoted to Sergio Leone (the complete works) and Don Siegel. The first Prix Lumiere, an award Fremaux expects to present annually and ambitiously conceives of as ‘the Nobel Prize of cinema, was bestowed upon Clint Eastwood, many of whose films as a director were also shown.

“The 79-year-old actor-auteur was busy in Lyon for four days, during which he was feted as the special guest at several dinners; gave a press conference introducing Siegel’s 1958 pic The Lineup; accepted his fest award at a public ceremony before 3,000 people; kicked an opening ball at a soccer game in front of 40,000 fans; and introduced a large-screen showing of a new print of The Good, the Bad and the Ugly for 5,000 rabid cinephiles.

“At each event he caused a rock star-like frenzy. Fremaux was able to lure nearly 40 international directors to the fest’s opening night; within my first five minutes at a reception, I bumped into Alfonso Cuaron, Jerry Schatzberg, Emir Kusturica and Claude Lelouch. The great restaurant Le Passage functioned as the festival’s canteen, open at nearly all hours, and the central tented meeting place featured an embarrassment of enticing books and DVDs for sale.

“To my knowledge, there isn’t another film festival quite like Lyon anywhere else in the world. Bologna specializes in old films and rarities but remains rarefied rather than public, Pordenone focuses on silent cinema, Telluride maintains equally high standards but concentrates on the new. Roger Ebert‘s annual fest is perhaps closest in its devotion to past and neglected glories but shows far less.”

As I hear it, Kirk Jones‘ Everybody’s Fine (Miramax, 12.4), an About Schmidt-type family drama that will be reviewed following its AFIFest premiere on 11.3, isn’t necessarily a Best Picture candidate, but Robert De Niro, playing a dad looking to reconnect with his grown kids, could snag some consideration as a Best Actor candidate.

“It’s a low-key performance, which actors will like — understated — and he hasn’t been Oscar-nominated since Cape Fear, which was 16 or 17 years ago,” says a guy who’s seen it. “He more or less sells it with two scenes — a meltdown moment during a plane flight and an emotional scene at a hospital.” 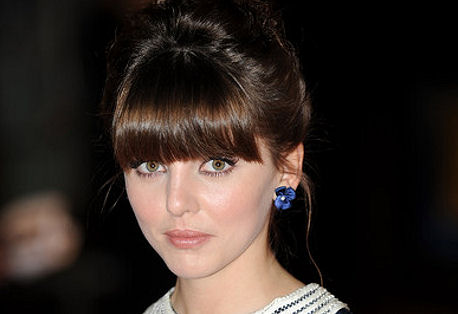 Miramax president Daniel Battsek, a good man, has been given the boot. As part of a late September announcement about streamlining/downsizing the company, Disney management stated that Battsek would “continue to oversee all aspects of creative, development, production and business and legal affairs” out of New York. Nikki Finke is reporting that Miramax’s NY office will now be closed, and that the whole operation will now move to the Disney lot.

A studio spokesperson told L.A. Times reporter Claudia Eller on 9.24 that “we continue to look at the best way to run our lines of businesses most efficiently.” I said in a 9.26 posting that “rhetorical references to ‘efficiency’ by management are usually cause for concern.” So there you go.

Sorry for Daniel — a longtime supporter and friend of Hollywood Elsewhere — and for anyone else at Miramax who may also be thrown over the side. It’s tough rowing out there.

I’m sorry but I’ve never found locations in and of themselves to be remotely scary. I don’t even find them unsettling. It”s interesting when you can sense the aura around certain places — the White House, Ground Zero, Dealey Plaza in Dallas — but that’s a long way from scary. It’s fascinating to stand in areas and buildings that have been used in famous movies (like Mission San Juan Batista near Hollister) but again, no spooks.