Support on Patreon Follow @wellshwood
15 Comments
Under The Table

It’s a bit unusual for a Toronto Film Festival party to go 14 hours straight. The hosts will be obliged, of course, to serve not only breakfast but also lunch on top of a gargantuan amount of alcohol. What festivalgoer would want to revel this hard? I’m not identifying the hosts, of course, but I’d give the idea a re-think if I were them.

I don’t exactly “like” Robert Rodriguez and Ethan Maniquis ‘ Machete. I found it mildly agreeable because of three or four factors that I’ll explain in a second. But it left me persuaded all the more that Rodriguez lacks the sensitivity to be an A-level director. His movies are always about blood, bullets, hot babes and primitive emotions. He really does seem to lack the wit and the savoir faire to do anything else.

You’re not a serious director unless you can see, feel or otherwise sense the presence of invisible things. As a director (and probably as a man), Rodriguez has shown an interest and/or focus in the obvious physical stuff. He’s gone “within” exactly once, and that was some 17 or 18 years ago in El Mariachi (and particularly via the performance of Carlos Gallardo). Since then the man has pretty much been a shameless whore.

Machete, however, is half-tolerable because it’s an out-and-out comedy as opposed to a Grindhouse-style genre wallow, and as such is probably Rodriguez’s best (certainly least offensive) film since El Mariachi. It also pushes a pro-Latino, pro-immigration, screw-the-racist-Arizona-haters political theme that is very much to my liking.

On top of which it’s vaguely surreal to watch 67 year-old Danny Trejo strut around as Mr. Latino Stud with women 50 years younger licking their lips. And it’s mildly amusing to see Lindsay Lohan (a) playing a druggie, (b) doing a Lady Godiva topless scene (blonde hair covering certain regions) and (c) shooting a bunch of baddies during the big bloody finale while wearing a nun’s habit. And Robert De Niro, playing a sleazy right-wing Texas politician, delivers one great line near the end about how he’s “not even from here.” And there’s a reasonably decent slapstick bit involving the use of a body part. (No further details.)

That said, Machete is one of those sloppy B movies that throws as much gooey stuff at the walls as it can in hopes that some of it will stick. It’s the kind of film that makes the lower-end-of-the-gene-pool guys feel hip, so It’ll probably generate decent word-of-mouth. But the relentless emphasis on blood, sadism, slicing and limb-severing has a nauseating effect, and after a while you just want Machete to end. You feel like taking an Alka-Seltzer after it’s over.

On top of which two characters are shot and seemingly dead, and then it turns out they’re not for reasons that don’t add up. I hate that. If you’re going to kill someone, kill them and send them to kingdom come. Permanently. No reprieves.

Is it okay if I bypass Will Gluck‘s Easy A (Disney, 9.17) and proclaim Emma Stone as the next big thing — a sassy Michelle Monaghan-resembling actress-comedienne in the Elaine May-Eileen Brennan mold — on the strength of this trailer? Or do I have to actually go to this afternoon’s 4 pm screening and sit through it? Because the trailer makes me feel as if I’ve pretty much seen it.

if you were Quentin Tarantino, currently serving honcho of the Venice Film Festival jury, why would you be walking around with an emotionally vivid black cowboy hat? He’s never worn one before. Some kind of gesture of support and solidarity for fellow genre-wallower Robert Rodriguez?

Last night Michael Douglas told David Letterman that he has Stage IV throat cancer. Is that “not where you want to be?” Letterman asked. “Uhm, no,” Douglas said. “No, you like to be down at stage one.”

“The big thing you’re always worried about is it spreading,” the 65 year-old Douglas explained. “So I am head and neck. I am above the neck, so nothing’s gone down, and the expectations are good.” He said his chances of recovery are 80 percent “and with certain hospitals and everything, it does improve.” 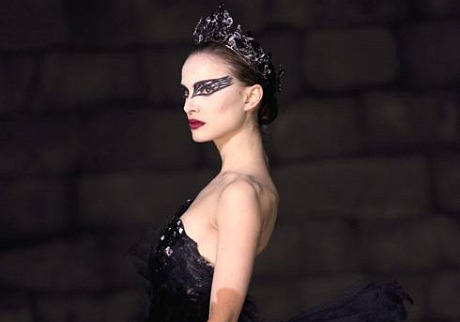 In an odd twist, Tapley has also reported that “all of Hammond’s material that runs at Deadline will also run at Movieline.com, so make that two outlets getting into the Oscar game in a big way this year.” Double posting on organizationally-linked-but-separate industry websites? That can’t be right.

One presumes that Finke’s flattering 8.13 profile of Pete’s industrious and well-liked life Madelyn Hammond (“The Job Whisperer”) was somehow linked to the Hammond hire, or vice versa.

“[It] left me devastated, excited, tense and emotionally drained,” Beames texted. “[Jury chairman Quentin] Tarantino will be a fool if he doesn’t give this the Golden Lion…unless, of course, something even better is coming up. Aronofsky has made his first masterpiece and Natalie Portman must now be considered a favorite for the Oscar. [This is a] perfect film that blends The Red Shoes with Antichrist, via Cronenberg.”