For about 40 years Arthur Krim (1910 – 1994), the distinguished chairman of United Artists and then Orion Pictures from the early ’50s to early ’90s, put out a run of quality-level, award-winning films that eclipses the record of Harvey Weinstein in terms of Oscar nominations and awards.

On top of which the soft-spoken Krim never took a producing credit and because of that “he was trusted by talent,” a former confidante says.

Under Krim’s guidance and final approval a long healthy run of Academy Award-winning productions as The African Queen, Marty, The Apartment, West Side Story, Tom Jones, In The Heat of the Night, Midnight Cowboy, One Flew Over the Cuckoo’s Nest, Rocky, Annie Hall, Amadeus, Platoon and The Silence of the Lambs were released by UA/Orion. Not to mention several critically-favored and/or culturally important titles such as Some Like It Hot, One, Two, Three, Dr. No, It’s A Mad, Mad, Mad, Mad World, A Child is Waiting, A Hard Day’s Night, Help!, Hannah and Her Sisters, Hoosiers, Robocop, No Way Out, 10, The Great Santini, The Bounty and A Little Romance. The list goes on and on.

In an interview posted today (9.29), Empire‘s Helen O’Hara quotes Steven Spielberg saying a couple of things about Lincoln, which begins shooting in October. Spielberg begins by explaining that the source material, Doris Kearns Goodwin‘s Team Of Rivals, “is much too big a book to be a movie, so the Lincoln story only takes place in the last few months of his Presidency and life.

“I was interested in how he ended the war through all the efforts of his generals…but more importantly how he passed the 13th Amendment into constitutional law. The Emancipation Proclamation was a war powers act and could have been struck down by any court after the war ended. But what permanently ended slavery was the very close vote in the House of Representatives over the 13th Amendment — that story I’m excited to tell.”

Asked if Lincoln will bear any similarities to Amistad, Spielberg says that his Anthony Hopkins-starring 1997 historical film “is much more visual than Lincoln is going to be. It feels very much like a procedural. It shows Lincoln at work, not just Lincoln standing around posing for the history books…arguably the greatest working President in American history doing some of the greatest work for the world.”

It took me a while to upload this clip from yesterday’s New York Film Festival press conference with A Separation director-writer-producer Asghar Farhadi, moderated by NYFF honcho Scott Foundas.

During a Telluride Film Festival chat Tilda Swinton mentioned her admiration of Farhadi’s About Elly. A questioner at yesterday’s press conference brought it up also. I’ve never seen it so I obviously need to man up and buy the DVD on Amazon.

Here, again, is my rave response to yesterday’s screening. All press screenings and conferences are happening at the Walter Reade theatre on West 65th Street.

A little less than a month ago Wall Street Journal critic Joe Morgenstern mentioned an alleged fact to myself and a few others at a Telluride Film Festival dinner. He said that the colloquial term “loser” was first coined in Walter Tevis‘s 1959 book “The Hustler.” It caught on in a bigger way two years later when Robert Rossen‘s The Hustler, an adaptation of Tevis’s book, opened.

The line was spoken at the end of Act One by George C. Scott, referring to Paul Newman‘s Eddie Felson: “Stick with this kid…he’s a loser.” It was used two more times in the film by Newman.

Until Morgenstern mentioned this I never knew that prior to ’59 (or ’61 or sometime during that end-of-the-Eisenhower-era period) Average Joes never used this term in common conversation. I realize it has a psychological connotation that relates to post-World War II ennui among the go-getter classes, but I thought it had been kicking around since…I don’t know, the late ’40s or something.

I do know that three years after The Hustler opened the Beatles cut a song called “I’m a Loser,” and a year later Bob Dylan referred to a nurse being “some local loser” in the song “Desolation Row.”

My attention was elsewhere when it was announced last May that Catfish co-helmers Henry Joost and Ariel Schuman would co-direct Paranormal Activity 3 (Paramount, 10.21). I felt Paranormal-ed out after part 2, but the Joost-Schuman plus Joe Leydon’s Fantastic Fest Variety review makes me want to again submit.

“Paranormal Activity 3 earns points for its low-key ability to keep viewers primed over long stretches to expect that something very bad, or even worse, may happen at any moment,” Leydon writes. “Slightly slicker and more densely populated than earlier pics in the franchise, the Oct. 21 Paramount release should play well with any fans who haven’t already tired of the found-footage gimmick.”

Five’ll get you ten A.O. Scott decided to do a “Critics Picks” assessment of Karel Riesz and James Toback‘s The Gambler (’74) when he heard about the reported Paramount remake that became briefly notorious when Toback, who based his script partly on his gambling-addicted life, complained that no one from Paramount had given him so much as a courtesy call. If the remake happens, Martin Scorsese might direct with Leonardo DiCaprio in the James Caan role. 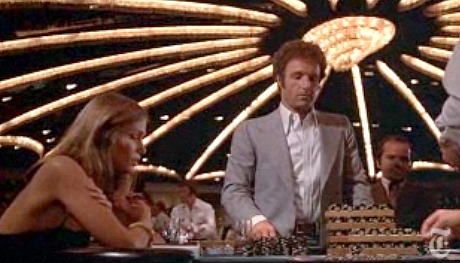 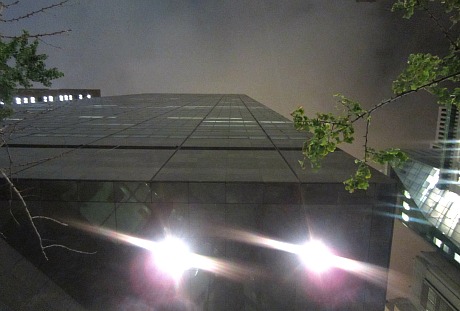 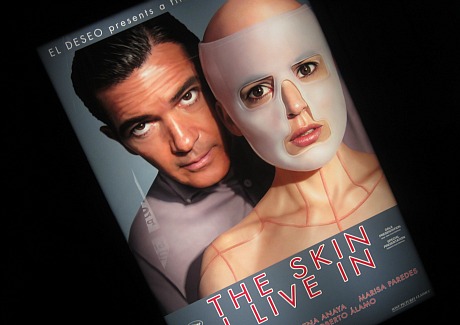 I saw Pedro Almodovar’s The Skin That I Live In once again this evening, having initially seen it five months ago at the Cannes Film Festival. Review excerpt: “It’s more of a wicked-camp thing. More than a few times the crowd I saw it with erupted in giddy chuckles. And yet Skin, after a fashion, is played more-or-less straight. Always the best way to go with a wink-winker.” 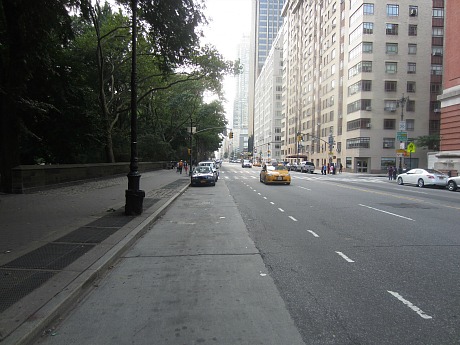 Deadline‘s Michael Fleming is reporting that the new life-of-Moses movie, which Warner Bros. is allegedly trying to get Steven Spielberg to direct (yecch!), is “not a remake of the 1956 Cecile B. DeMille-directed The Ten Commandments.” And yet it covers “Moses from birth to death” including “his awakening to the plight of the Hebrew slaves that led Moses’ struggle against the Pharaoh for their freedom out of Egypt, the Burning Bush, the Ten Plagues, the daring escape across the Red Sea, receiving the Ten Commandments, and delivery to Israel.” Which is precisely what the DeMille film covers, so what’ll different about this one, Mike, besides less corny dialogue? We all know the answer: better visual FX.

I saw Asghar Farhadi‘s A Separation at this morning’s New York Film Festival press screening, and yes, it hit the mark again. This well-honed, deep-well family drama is now the official Iranian submission for the Best Foreign Language Film Oscar, and is destined to be among the five nominees…unless the foreign language committee gives it the same kind of blowoff that they did with Four Months, Three Weeks and Two Days. Let’s call that highly doubtful. 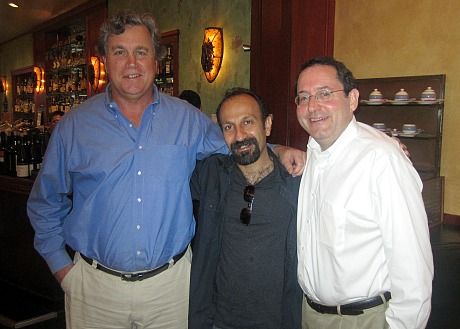 I caught most of A Separation earlier this month at the Telluride Film Festival but this time I saw the first 40 minutes. The same levels of excellence prevailed — spot-on dialogue, riveting situations, characters you can’t help but believe and invest in.

Shot in Teheran, A Separation is basically about class and repression and honor among families. Particularly two families — a relatively well-to-do one and a lower-class one headed by a hot-tempered husband and a submissive, deeply religious wife. The plot centers on a claim by the latter couple that the pater familias who hired the poor wife to take care of his Alzheimer’s-afflicted dad pushed her down a flight of stairs and caused her to miscarry. Iranian law says this can be rectified with a payoff, which the angry, lower-class husband desperately needs to pay off creditors.

All of it adds up to a fascinating window into family and community values, not just as they exist in present-day Tehran but pretty much anywhere when you boil it all down. 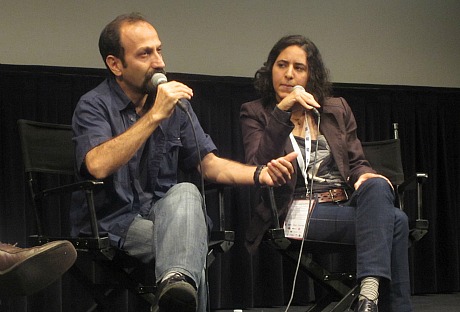 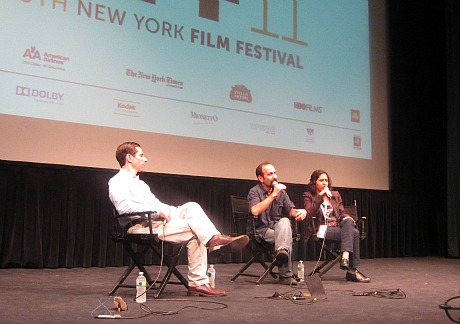 There’s a metaphor or two in this tale of a hardscrabble lower-middle class family, particularly the hair-trigger father venting his resentments and economic frustrations upon an upper-middle class dad (and to some extent his wife, daughter and senile father) over a misunderstanding..and a lie that only comes out at the end.

As I said in Telluride, “The combination of Farhadi’s simple, direct shooting style and the deeply compelling performances (the cast is headed by Leila Hatami, Peyman Moaadi, Shahab Hosseini, Sareh Bayat and Sarina Farhadi) are blended in this instance with a story that hits on a riveting moral-ethical issue. The upshot is a dividend that is socially and psychologically revealing in a way that is truly exceptional.”

NYFF co-director Scott Foundas interviewed Farhadi on the stage of the Walter Reade Theatre following this morning’s showing. A few of us then traipsed over to Gabriel’s on West 60th for a luncheon with Farhadi and Sony Classics chiefs Tom Bernard and Michael Barker.

I was given some personal chat time with Farhadi, but it’s on the digicorder and I can’t easily convert to mp3 and transcribe and all that in a Starbuck’s on West 57th. Later. 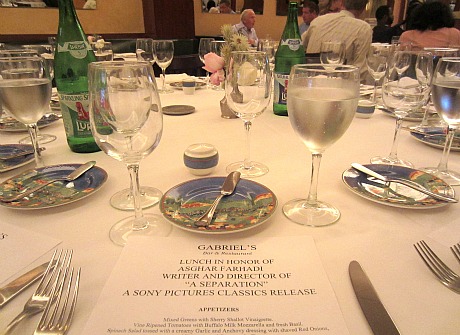 The Best Picture forecast in yesterday’s Gurus of Gold post-Toronto update has Alexander Payne‘s The Descendants on top, followed by Steven Spielberg‘s War Horse. The latter lost a lot of heat yesterday when everybody took a look at that Harlequin Romance horse’s-mane-with-Fabio-hair poster, but perhaps the Guru vote was counted before this.

The Help, significantly, now sits one slot below the fifth-ranked Moneyball. The Artist and Midnight in Paris are ranked third and fourth respectively. Seriously? Awards Daily‘s Sasha Stone is the only Guru to give Moneyball a #1 ranking. It seems a bit strange that after those Moneyball raves and that $20 milliion opening last weekend that some people are still putting the perfectly likable and satisfying Midnight in Paris above it in the Best Picture likelihood rankings, but whatever.

While sitting at the bar last night at Phebe’s I accidentally knocked some water onto the keyboard of my Macbook Pro. I didn’t have a hair dryer with me, but I naturally picked up the device and wiped it off and hung it upside down and swore and hissed. Which didn’t help. The screen freaked out, flashing an insane psychedelic collage of pink and white and purple and black impulse doodles, like some kind of alien sanskrit code…meltdown, crash, finality.

I turned it on and off a few times, hoping and praying. But it seemed pretty much dead and dysfunctional. The crazy colors stopped after a couple of restarts, and then it reverted to the desktop image and all the usual-usuals, but the cursor was still and immovable. I looked into the abyss and gulped. I have an iMac back in West Hollywood but I figured I’d have to buy a new Macbook Pro right away, and knew this would set me back about $1200 and change.

And then about two hours later, the whole mechanism kicked in and returned to life like nothing had ever happened. I guess the touch pad or whatever finally dried itself off or something. Wow! Spared.