Roadside threw a luncheon today for Arbitrage star and possible Best Actor nominee Richard Gere at Pizzeria Mozza (641 N. Highland Avenue). Gere delivers one of his career-best performances in Nicolas Jarecki‘s film, but yes, the Best Actor field is very crowded this year. But the equation is (a) Gere is exceptional in Arbitrage plus (b) he’s also been humping it hard and long and honorably for 35 years now, so give it up for the guy. 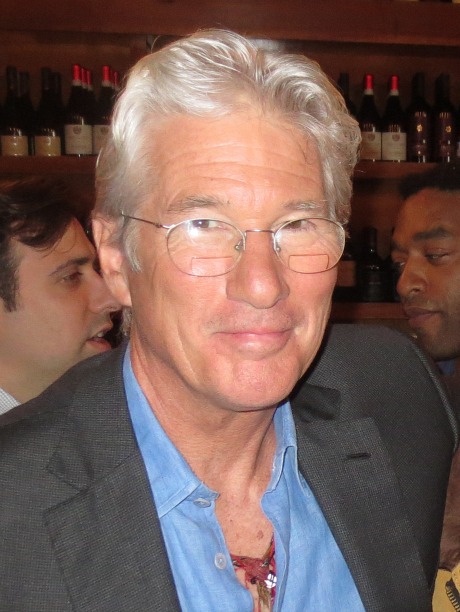 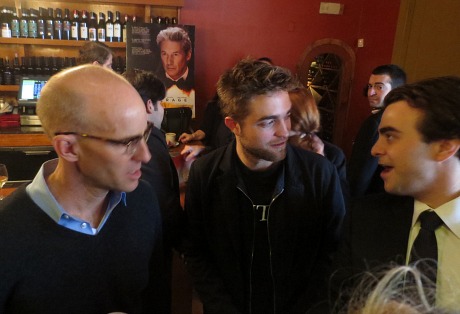 For some reason Robert Pattinson showed up toward the end of the luncheon. I’m taller than he is. He has a kind face and a warm smile, but his eyes kinda blank out when he listens to someone talking. When he’s trying to concentrate or show respect to whomever is speaking, I mean, his features go flat. That’s L.A. Times reporter John Horn to RPatz’s right (or our left) and Arbitrage director Nicholas Jarecki (right).
(More…)
November 30, 2012 2:17 pmby Jeffrey Wells
22 Comments
Please Watch Us

A passel of “welcome back from Vietnam” screeners sitting on my dining-room table when I got in just before noon. No Les Miz although I’ve been told it would be here, or that it’s been mailed at least. 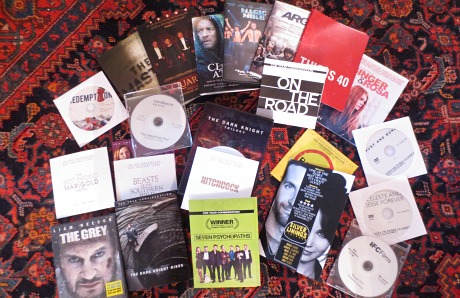 Tokyo is an architecturally dull, dull town. This section (a couple of miles east of downtown) looks a lot like Cleveland or Joliet, only less cultured. There are some city streets you can gaze at from inside a passing train and say “wow, look at that!” or “hey, that’s cool.” You can sense the history and the flavor and the intrigue. No such luck with Tokyo.

The misty rain and dense fog covering Los Angeles delayed the landing of my flight from Tokyo…so? I’m now in a cab on La Cienega, thinking once again of that Charles Bukowski line about how “the stink of L.A. gets into your bones.” I was lucky enough to chat with Bukowski for 90 minutes or so when I was writing the press notes for Barbet Schroeder‘s adaptation of Barfly. His spirit lives on at Hollywood Elsewhere, as far as it goes. Back then it was Bukowski; today it’s Bomowski.

The United Nations General Assembly voted overwhelmingly Thursday “to upgrade Palestine to a nonmember observer state of the United Nations, a triumph for Palestinian diplomacy and a sharp rebuke to the United States and Israel,” says a N.Y. Times report. The naysayers were the U.S. , Israel, the Czech Republic, Panama and an assortment of nickle-and-dime Pacific Island nations. The vote passed 138-9 with 41 abstentions.

I’m sitting here stranded in Tokyo and doing my best to deny it. And I’m really hating the puerile Japanese daytime TV programming that I’m watching. This culture is drunk on helium emotions and attitudes. They’re like six year olds. But all the way from Tokyo I can almost smell what will happen Monday morning when the New York Film Critics Circle vote for Best Picture, and I haven’t even seen Zero Dark Thirty so what do I know? But I think they’ll go for it nonetheless.

I think the NYFCC’ers will want to go hard and real as a swing away from the intense emotionality of Les Miserables, and the consensus is that Zero Dark Thirty is sharp and hard and austere. It also contains an allegedly stirring lead performance by Jessica Chastain, who may even beat out Silver Linings‘ Jennifer Lawrence…maybe. I suspect the NYFCC’ers have gotten over their first encounters with Lincoln by now, and they know what it really is and that giving it Best Picture trophy will land with a thud across the land. I’m also presuming that Silver Linings haters (David Denby and Rex Reed possibly leading the charge) are going to do everything they can to block a majority for David O. Russell‘s film. And I can’t imagine there being enough of a head of steam to put Life of Pi over. And The Master has gone down to the sea in ships.

But the biggest surge of feeling, to repeat, will be about the NYFCC wanting to give a big “eff you” to the Manhattan theatre-queen contingent that will be pushing Les Miserables.

I think they’ll give their Best Foreign Film award to Amour or Holy Motors or….No?

It’s now 9:15 am Tokyo time on Friday (or 4:15 pm LA time on Thursday), and the sooner I’m out of here the better. My Narita-to-LAX flight leaves at 5:10 pm (or 12:10 am LA time on Friday). The flight arrives at 9:50 am or nine and a half hours after departing. That’s funny as last week’s LAX-to-Honolulu flight was six hours and Honolulu-to-Tokyo was eight hours so I thought Tokyo-to-LA might be 12 hours or thereabouts. I hate being stuck in a fuselage for lengthy periods but I guess nine and a half hours isn’t so awful.

I go right to a Richard Gere Armitage lunch at 12:30 pm on Friday, and then back for a nap and then off to a 6 pm screening of The Hobbit in 48 fps on the Warner lot. (For me 48 fps is The Hobbit as I’m not invested in Tolkien realms in the slightest.) And then I’m doing Zero Dark Thirty screenings on Saturday and Sunday (I’m afraid that I might be so jet-lagged that I’ll miss something the first time plus I suspect that Kathryn Bigelow and Mark Boal‘s film warrants two viewings anyway).

There’s also a Sunday screening of The Guilt Trip, the Seth Rogen-vs.-Barbra Streisand road comedy that opens on 12.25. And the first Les Miserables screening I can get to happens on Wednesday at 12.5, but on the other hand I’m told that a Les Miz screener will arrive today. I think it’ll be better to wait to see it in a theatre.

This Hollywood Reporter Directors’ Roundtable is worth an hour of your time. Talk to certain pulse-takers and they’ll tell you Tom Hooper and Les Miserables are about to experience a turn in the road. David O. Russell is kicking it now like never before. Nobody knows what’s coming from Quentin Tarantino‘s Django Unchained, but I can guess. Ang Lee has the “job very well done but no Oscar take-home” vote. Ben Affleck wants to rally back to where he and Argo were six weeks ago. Gus Van Sant‘s Promised Land…no comment until I see it.

The people who write the embed codes for Brightcove are truly incompetent because their codes always cause problems when I paste them down.

In the spirit of that 11.12 HE/Bad Robot Silver Linings Playbook screening, HE readers are invited to attend a screening of Ana Duvernay‘s Middle of Nowhere at a TBA location on Monday, 12.3 at 7 pm. You’ll again be asked to tap out thoughts. I was surprised and elated by how deeply this film penetrates. Director-writer-producer DuVernay will do a post-screening q & a. RSVP hastily to gruver1@gmail.com.

Andrew Dominik‘s Killing Them Softly is opening Friday (11.30) with an 87% Rotten Tomatoes rating. All Boston-area crime flicks based on George V. Higgins source material are worth the price, but this one is noteworthy for a rightwing political theme that says Obama’s hope-and-change stump speech of the ’08 campaign was bullshit. Here’s my 5.22.12 Cannes Film Festival review:

“Indiewire‘s Eric Kohn wrote that Softly, like Dominik’s five-year-old The Assassination of Jesse James By the Coward Robert Ford, is a “tone poem that uses narrative to prop up various attitudes and moods,” but this time with a greater emphasis on the polemic. Well put.

“The plot is basically about Brad Pitt‘s Jackie Cogan, a hard-as-nails hitman, being hired to rub out a few guys involved in the robbing of a Boston poker game, as well as an unlucky rackets guy (Ray Liotta) who didn’t really do anything but tough shit — he’s on the list regardless. And yet the first 25% to 30% of the film is Pitt-less, focusing on the perps and their grubby, slip-shod realm.

“Cogan, a down-to-business, cut-the-shit assassin, is about doing the job, period. Rationality, efficiency, no personal issues or baggage — an exemplar, in a sense, of ‘clean living,’ which is what Dominik, during the just-finished press conference and somewhat flippantly, said the film is partly espousing.

“Above all Cogan is no believer in community and equality and Barack Obama’s high-falutin’ talk about sharing and ‘we’re all in this together.’

“Killing Them Softly, then, is a fairly novel thing — an ‘Obama’s rhetoric is full of shit’ crime movie. Okay, not Obama’s per se, but his inspirational come-together theme of the ’08 campaign (a clip from his acceptance speech in Chicago is used at the beginning and end) or the generic uplift rhetoric of ‘America the beautiful.’ Pull the wool off, take the needle out, wake up to what America is.

“So this isn’t The Friends of Eddie Coyle but a Metaphor Movie. The political newscast and Obama-speech clips are interwoven a bit more persistently than is necessary. But the ending of Killing Me Softly, no question, hits it right slam on the head. I chuckled. I left the theatre with a grin.

“Most of Softly, like any good crime pic, is about character, dialogue, minutae, this and that manner of slimeball scumbag, rain, sweat, smack, bottles of beer, guns and old cars (i.e., ratty old buckets, classic muscle cars, ’80s gas guzzlers). Nobody in Killing Me Softly ever heard of a Prius.

“Pitt delivers a solid, snarly performance as the bearded, leather-jacketed Cogan. But running a close second is Scoot McNairy as a scuzzy thief who’s out of his depth. He does more than just scuzz around and suck in cigarette smoke. He exudes fear and anguish along the usual cocky irreverence required of any bottom-tier criminal. He should and will be seen again, and often.

“Other stand-out performances come from Richard Jenkins, Vincent Curatola and the Australian Ben Mendelsohn, acting with his native accent, as the sweatiest and gunkiest no-account junkie west of the Pecos. James Gandolfini doesn’t quite register as a gone-to-seed hitman…sorry.

“Given a choice between an unfettered, down-to-basics George V. Higgins crime drama and what Softly‘s double-track variation is, I’m mostly pleased with the latter. We all know the about the lure of rugged, tangy, straight-punch crime films, which much of Softly is. We’ve been there many, many times. So why not a crime film that goes for something else on top of the usual-usual? Ladies and gents, it’s okay with me.”