A digitally-enhanced version of Richard Lester‘s Help! is now buyable on iTunes. Help! is a 6 or 6.5 compared to the 8.5 or 9 of A Hard Day’s Night. But I love Lester’s decision to have that middle-aged gnome play the flute at the end of “You’ve Got To Hide Your Love Away”…Chico Marx sitting on the green shag carpet. (And I love that the flute riff complements but doesn’t echo the main melody — it has its own purpose and flavor.) And Lennon’s face is so impassive and non-expressive. His eyes are alive but his mouth barely moves as he sings — his mouth could almost be something out of Clutch Cargo. And I love how Eleanor Bron (27 at the time) just kind of chills on the couch — no smiling or grinning.

I felt so badly burned by Prometheus that I began to wonder if Ridley Scott might be at the beginning of a downturn cycle in the same way that Alfred Hitchcock started to go downhill after The Birds. (There are some who today actually stand by the comically stilted Marnie, which opened 13 months after The Birds.) Writing off Scott sounds impulsive and ill-considered given his sterling track record, I realize, but I know for sure that I don’t trust him any more. He was great when he was great, but then he made Prometheus and the dye colored the water and Scott was suddenly Peter Hyams.

My favorite Richard Matheson-authored film — don’t laugh — is Somewhere In Time, a movie about a guy (Chris Reeve) who is so in love with a real-seeming dream girl from the past (Jane Seymour) that when he loses her he gives up on life and dies. And it works as a romantic idea. Somewhere in Time ended with one of the most ambitiously choreographed extended uncut sequences in film history (co-composed by director Jeannot Szwarc and dp Isidore Mankofsky), and then the purity of this shot was mauled by fades and cuts when the film went wide. A shame. Matheson died yesterday at age 87.

They don’t call him Liam “Paycheck” Neeson for nothing. Deadline‘s Mike Fleming is reporting that Neeson is “closing a deal in the vicinity of $20 million” to star in Taken 3. Yes, it’s depressing but who among us would play it differently if we were in Neeson’s shoes? Who would’ve guessed when Neeson was playing handsome, dashing, charismatic soul men in Schindler’s List, Michael Collins and Husbands and Wives, that he would he would one day become the new Charles Bronson?

Neeson, 61, will almost certainly be able to keep making action crap until he’s 70. Bronson kept going until well into his 70s. Almost everything Bronson did after Death Wish was crap, but he held his nose and did it anyway. All through the ’80s and early ’90s he did nothing but piss on his reputation in exchange for cash. Same thing with Neeson — he knows he’s making mostly crap and we all know and accept this…crap, crap, crap, crap, crap, crap, crap. Neeson lights his cigars with $100 bills, but most of the films he’s made since the huge success of Taken (’08)…hell, since he starred in The Phantom Menace…forget it. What’s the point? No one cares.

If Paramount has any brains they’ll definitely include the originally shot ending of World War Z on the DVD/Bluray. Everyone has read about the discarded finale and is probably curious to some degree. It would be close to criminal not to share it, especially given the dark sexual-territorial aspects that may or may not have been filmed. On 6.22 Movies.com’s Peter Hall posted a synopsis of the original finale in the WWZ script. “We don’t have 100% confirmation that all of this [finale] ended up being filmed, though there’s evidence below [that] a lot of it was,” Hall writes, “but this is at least how it was supposed to end.”

Key portion: “Gerry (Brad Pitt) reaches Karin (Mireille Enos). He explains to her that the cold is the way they’ll win battles, which does her no good because it just so happens she and the kids are in a refugee camp in the sweltering heat of the Everglades. They’re in the type of camp where you have to have something to trade to survive, and it just so happens the one thing Karin had to trade was herself. She doesn’t explicitly tell Gerry this, but after she hastily hangs up the phone we see that she’s in some kind of reluctantly consensual relationship with the soldier who rescued them from the rooftop at the beginning of the movie.

I don’t mind living in a Lauterbrunnen-like urban canyon in the financial district, but I can’t say I’m in love with it either. I don’t have a big problem with looking out the living-room window and gazing down 14 stories to the street below, but I do feel a wee bit remote and cut off. But I love getting to know the financial district, where I’ve never really hung before. And I’m really loving all the friendly vibes I’m getting from everyone down here (apart from the dicks at The Vintry). I’m basically okay with the neighborhood. It just doesn’t conform to anyone’s idea of a quaint, homey, people-friendly realm. 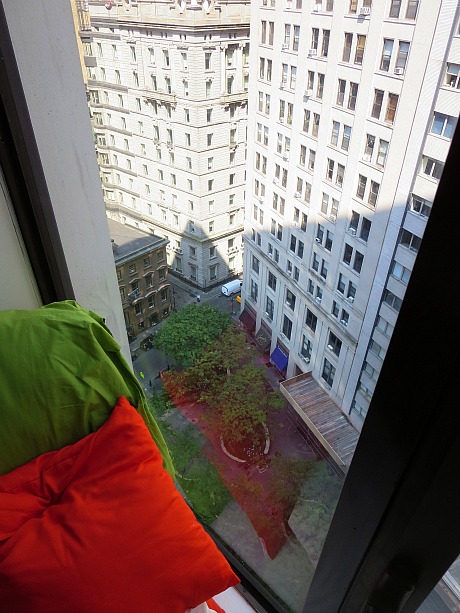 I’ve made some calls and written some emails about trying to attend Thursday morning’s funeral service for James Gandolfini, which is happening at Manhattan’s Cathedral Church of Saint John the Divine (Amsterdam and 112th). Hundreds are going to attend. The passing of this legendary actor has hit New Yorkers where they live, and not just in a tragic, realistic sense. For millions Tony Soprano‘s death in that Bloomfield, New Jersey restaurant (actually an ice-cream parlor called Holsten’s) was an uncertain thing. Now he’s really gone, and many of those who felt they didn’t experience closure from that final episode are, I suspect, going to attend Thursday’s service to finally get that, flaky as that sounds. It’s going to be like the funeral of Vito Corleone and Marlon Brando thrown together. 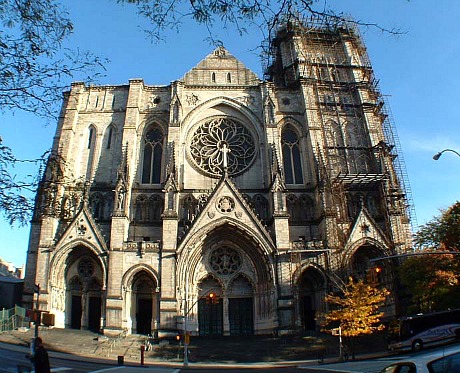 I don’t know if the family or Gandolfini’s managers (Sanders Armstrong Caserta Management) are saving seats for press or not, but I can at least try for some kind of attendance or viewing or something. I want to do this. It feels important to me. I’ve been a Gandolfini guy since True Romance, or for the last 20 years.

Nick Clement to HE: “I absolutely cannot wait to see Inside Llewyn Davis, which is probably my most anticipated movie for the rest of 2013. I don’t want to hear any spoilers but what’s the deal with the cat? Is the cat as big of a part of the movie as one might think due to how many shots of it that are featured in the trailer? Is the calico cat a “character” in the film? My wife and I are cat lovers so we’re both curious.”

HE to Clement: “The Llewyn Davis cat is cool but you should probably take it easy and not look for anything special or…you know, nirvana-like to happen. The cat has an identity, yes, and is a life force of a certain kind, but he’s basically a motif. He certainly has no ‘cat personality’ except that he’s willful and crafty enough to escape apartments and run off into the streets of Manhattan and travel dozens of city blocks on his own. He’s basically just an orange object to be held and lost and found and held and lost and found. In and of himself he’s more or less meaningless. At most I see him as a kind of wandering Manhattan Ulysses. But he’s really a kind of MacGuffin.”

Clement to HE: “Love it! I watch A Serious Man every few months, so your recent comparisons have gotten me very excited.”

5 Comments
Visit To The Dentist

I’ve a fairly busy screening week in front of me — White House Down, Stuck In Love, The Way Way Back, a possible second viewing of Fruitvale Station, a possible peek at Pacific Rim — but a voice is telling me I should see This Is The End, even though everything I can sense and smell tells me to wait for Netflix, if that. This Seth Rogen-Evan Goldberg film seems to have caught on to some degree ($57 million) with the under-30s and has perhaps even touched something in the general zeitgeist. Or am I giving it too much credit? This passage from the New Yorker review by Anthony Lane caught my eye. 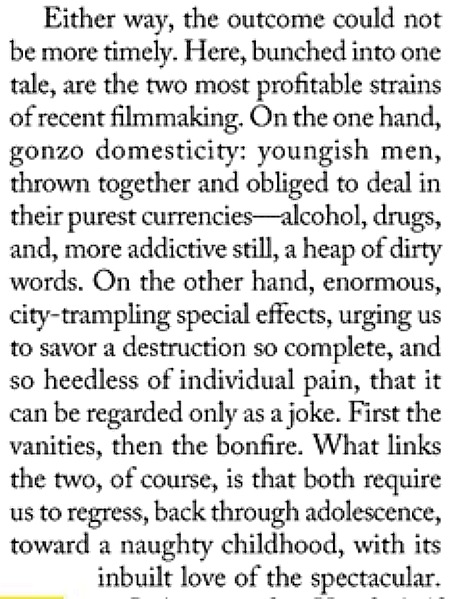 I caught the first three or four weeks of Mad Men‘s Season Six, but I disengaged during the European stay. Now that I’m back and in NYC, I’ve bought a season pass and plan to binge over the next few days. Last night Don Draper, the chilliest and most uptight, most fucked-up hider, cigarette smoker and chronic boozer in cable TV history, got whacked. Fired from Sterling Cooper, I mean. Good! Best thing that could have happened to this asshole. The shattering of his smug facade has been a long time coming. Go to rehab, go to jail, drop the Draper identity or at least get more in touch with your real self and your actual past, slam your car into a telephone pole, stick your head in an oven, grow a beard, become a hippie.

East End Film Festival synopsis for Mike Figgis‘s Suspension of Disbelief: “A world-renowned screenwriter becomes implicated in the murder of a beautiful young Frenchwoman in Mike Figgis’ return to the world of psycho-sexual mind games. A murder-mystery in which its protagonist loses sight of reality and the fiction he has created. Figgis is one of the UK’s truly maverick cinematic spirits, returning here with something fresh, exciting and more than a little disturbing.” Plus a 6.22 Guardian piece by Figgis about what’s ailing the British film industry.