21 Comments
How Cool is Cruel?

James Schamus‘s Indignation opened in four theaters this weekend. It earned $89,072 for an average of $22,268 per situation. In my 7.26 review I wrote that it’s worth seeing for a 16-minute argument/debate scene between Logan Lerman (as a Newark-born freshman at an Ohio college) and Tracey Letts (as the college dean). Here’s a Village Voice piece about the writing and filming of this scene. I called Indignation a “respectable, adult-friendly, nicely refined period drama (i.e., early ’50s) about values, academia, obstinacy, surprisingly good sex, Jews (in particular a tough Jewish mom) and — this is key — brutally cruel fates.” I explained that “the ending alienated me to no end.” Did anyone happen to catch it? If so, any thoughts about the third-act windup and the fates that envelop Lerman’s Marcus Messner and Sarah Gadon‘s Olivia Hutton? 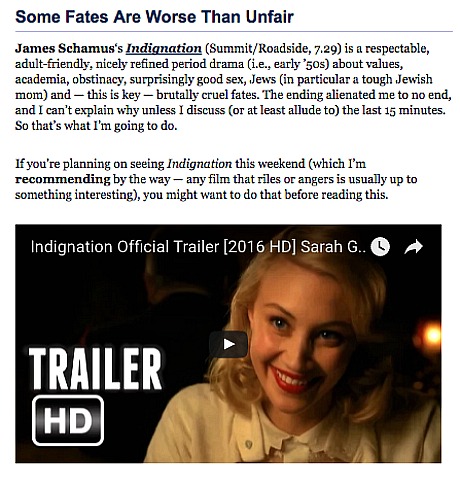 Ben Mendelsohn, Joel Edgerton, Michael Fassbender, Aaron Paul, Jon Voight…nobody ranks higher on Hollywood Elsewhere’s shitlist that Zak Galifianakis. Going back to the first Hangover flick and with the exception of his good work in Birdman, I’ve consistently loathed and despised ZG’s man-diaper performances for too long a period. He’s played the same bearded, bipolar low-life in film after film. Which is why I’m grimacing at the thought of watching Jared Hess‘s Masterminds (Relativity,9.30). It obviously has a lively, top-drawer ensemble cast (Kristen Wiig, Owen Wilson, Ken Marino, Jason Sudeikis, Kate McKinnon), and, yes, is based on a true story. But comedies about rural idiots are never, ever funny. Masterminds was originally slated to open on 8.19.15, but it got sucked into the vortex of Relativity’s financial implosion.

I’m sorry but Hollywood Elsewhere is as much of a sworn enemy of Park Chan Wook as I was of post-Snake Eyes Brian De Palma. I was respectful of Oldboy but then along came Stoker and that was it. I got off the boat. Last May’s Cannes viewing of The Handmaiden (Amazon, 10.14) wasn’t exactly torturous, but I knew going in it would a difficult sit, and it was that. I must have looked at my watch ten times.

32 Comments
Not So Fast on Jason Bourne Back-Pats

Back in ’07 The Bourne Ultimatum‘s earned a first-weekend tally of $69 million. But apply the inflation calculator and that $69 million becomes a bit more than $80 million in 2016 dollars. The just-opened Jason Bourne brought in $60 million this weekend, which represents a 25% dip. The bottom line is that on top of quality issues, Ultimatum still rules by a significant box-office margin.

If Jason Bourne manages a standard three-multiple it will obviously end up in the domestic vicinity of $180 million, give or take. Not bad but not exactly legendary. Then again Jason Bourne‘s $60 million debut is $22 million more than the $38 million earned four years ago by Tony Gilroy‘s The Bourne Legacy. And the newbie did earn $50.1 million overseas, which Variety is calling the “biggest overseas debut in the history of the action franchise.”

Khizr Khan, the father of Cpt. Humayun Khan, a slain Muslim American combatant, again trashed Donald Trump and his intemperance and seeming anti-Muslim disdain. “He is a black soul, and this is totally unfit for the leadership of this country,” Khan said. “The love and affection that we have received affirms that our grief — that our experience in this country has been correct and positive. The world is receiving us like we have never seen. They have seen the blackness of his character, of his soul.”

A Japanese documentary team visited Steven Spielberg in the early fall of 1982, around the time he was shooting his “Kick The Can” segment for Twilight Zone: The Movie, which opened in the summer of ’83. This was absolute peak-era Spielberg, and he was only 35. Raiders of the Lost Ark was recent history, having opened 15 or 16 months earlier, and E.T. and Poltergeist had rocked the industry only three or four months before this moment. People thought Spielberg had magic blood back then. Even I thought so at the time. It would never get any better for the guy.

But those sunglasses! If Michelangelo Antonioni had happened along, he would have taken Spielberg aside and told him to throw them in the wastebasket. But that’s Spielberg for you — he’s always been kind of a dork from Arizona.

I nearly did a Sherry Netherland hotel interview with Spielberg in the middle of the E.T. hoohah, but the arrangements were being handled by Peggy Siegel, who at the time was a contentious figure in my journalistic life, and for some insect-antennae reason I was fearful that my time slot was being nudged aside. (At the time I was finishing up an Us magazine cover story about Henry Thomas and Drew Barrymore.) So I called the hotel suite where it was supposed to happen and lo and behold, Spielberg answered. I should have just left a please-call message and said thanks, but I explained that I was slotted to speak with him and was wondering about the schedule, etc.

Siegel hit the roof (“How dare you violate protocol by talking to talent without my permission!”) and that was the end of that. She was right — I should have played by the rules.

12 Comments
Peace In The Hills

A friend and I took a longish walk through Bel Air early last evening. The Bel Air Hotel on Stone Canyon (portions of which are getting a little too Kardashian for my tastes), winding west on Chalon Road, up and down steep hills, up Funchal Road and then south on Bellagio down to Sunset, and then back to Stone Canyon. A quiet, settled vibe.  Most of Bel Air is Neverland.  Immense calm, a sense of the past. I don’t care about the wealth — I care about feelings of serenity, the sound of crickets, the proliferation of nature. Hundreds, thousands of old, well-trimmed trees. Gates, gates and more gates. Ivy-covered brick walls, adobe walls, ivy growing everywhere, the wonderfully calming fragrances, the subtlety of the lighting outside dozens upon dozens of handsome Old Spanish homes. It smells like Tuscany, like the hill country of Vietnam. And there’s very little of the vulgar, over-lighted, nouveau-riche homes you see here and there in Beverly Hills, homes that are mostly owned by clueless types (people of Middle Eastern ancestry are certainly among them), people who will never understand that the homes of wealthy folks with a touch of refinement always exude a submission to history…old-world, low-key, pre-WWII stylings. The only unpleasant aspect was the traffic — people in a hurry, driving 35 or 40 mph around sharp curves, areas where 25 or 30 mph would have been more like it. 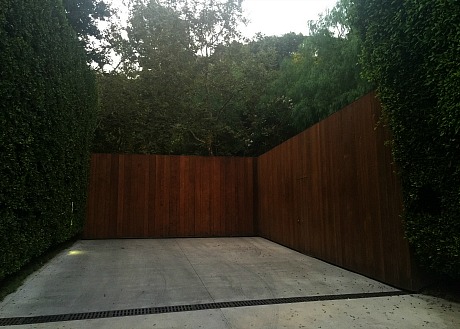 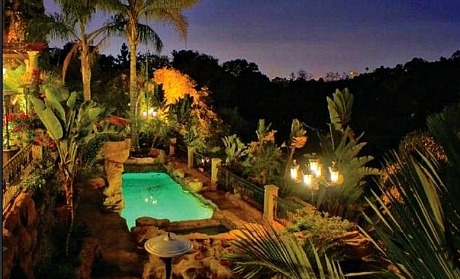 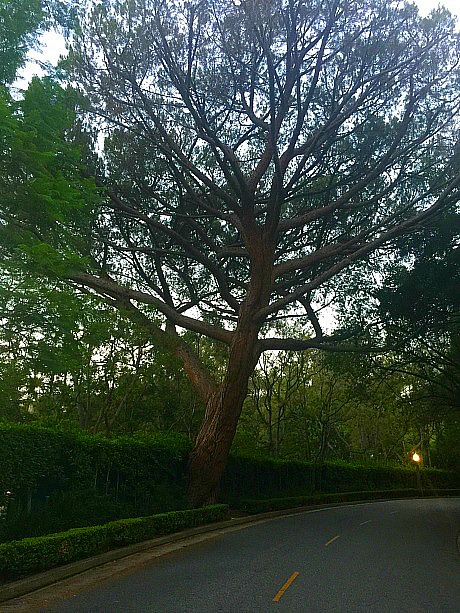 I’ll be visiting the Guillermo del Toro: At Home With Monsters exhibit at LACMA on Tuesday evening. The invitational press preview was…what, last night? The exhibit represents about 10% of GDT’s “Bleak House” creations, roughly 580 objects, all of which are based in a large mansion in Thousand Oaks. After the LACMA exhibit the monsters will visit Minneapolis, Toronto, Mexico City, Barcelona, Paris and New York. Four years ago Guillermo was good enough to honor me and HE’s own Svetlana Cvetko with a private tour — unforgettable. 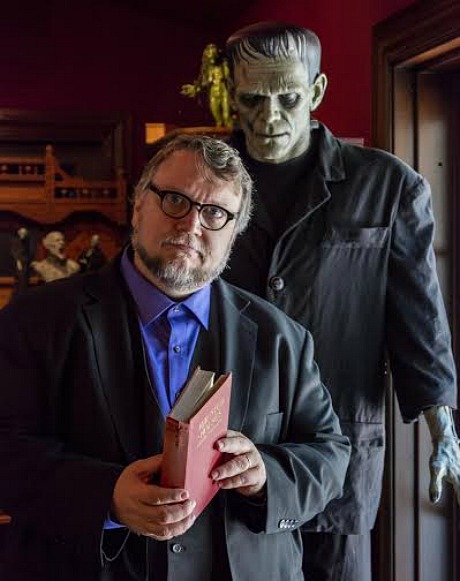 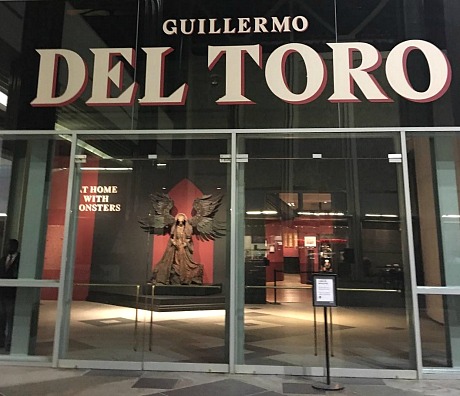 The classic complaint against The Man Who Shot Liberty Valance is the fact that Ransom Stoddard and Tom Doniphon should ideally be played by guys in their late 20s, and in their mid 30s at the oldest. Instead they’re played by James Stewart and John Wayne, who were 53 and 54, respectively, when the film was shot in 1961. With his full-head-of-hair wig Stewart could pass for a guy in his mid 40s, at least by the standards of the early ’60s, but the creased and pot-bellied Wayne looks like he’s pushing 60. Which makes it all the more difficult when he talks repeatedly about wanting to marry Vera Miles, who at the time was 32. When a supporting player asks the Duke if wedding bells are around the corner, he grins slightly, shakes his head and says “Don’t rush me…don’t rush me.” At his age?

Steven Zallian and Richard Price‘s The Night Of is good — interesting, well written, attention-holding — but Zallian and Price are in no hurry. The Night Of is mostly a grim procedural. The main order of business isn’t about revealing who butchered the pretty girl as much what it feels like to be accused and powerless in the maze of New York’s criminal justice system — an apparently innocent guy (Riz Ahmed) arrested for murder, booked, grilled, counselled, kept in cells, moved to Riker’s Island, etc.

I say this having only seen episodes #1 and #2 (The Beach, Subtle Beast). I’ll need to catch episode #3 (A Dark Crate) on HBO Now before episode #4 (“The Art of War’) tomorrow night. The adaptation of Criminal Justice, an eight-year-old British miniseries, began on 6.24 via HBO on-demand.

It reminds me a bit of Alfred Hitchcock‘s The Wrong Man. That 1956 movie was all about slow procedure and acute frustration by way of mistaken identity. It runs 105 minutes but feels like two hours plus. After Henry Fonda is arrested at the 18-minute mark nothing happens until ten or twelve minutes before the end, when the real thief — a Fonda look-like — is caught.

Donald Trump actually said all this stuff at a 7.28 rally in Davenport, Iowa (where Cary Grant died). Excellent dubbing by Peter Serafinowicz. A catty Trump is an incongruent concept, to put it mildly, but if he did speak like Richard Simmons he’d seem (I hate to say this) less odious because of the tone of mincing irony. The object of Trump’s scorn was former New York mayor and billionaire Michael Bloomberg, who of course trashed Trump brilliantly last Wednesday night from the Democratic National Convention podium.

Herein is a spiritual lithmus test for Sasha Stone and the hardcore Hillary brigade. If they hiss and arch their backs and go into their usual accusations against male heirarchy, well…there it is. But if they laugh a bit and take the bounce, that’s something else. Key phrase: “Since half the country will believe an evil cartoon version of Hillary Clinton, no matter what she says or does…” Second key phrase: “They don’t want kindly grandma…they want the wolf.”