Last night Tatyana and I watched David Dobkin‘s Wedding Crashers. Third time for me, but the last time was the late summer of ’05 — almost 13 years ago. All butter and gravy. Hardly any diminishment except for one scene. Dobkin’s comic emphasis was utterly brilliant in this film — lightning in a bottle. And since ’05, he hasn’t exactly been channelling the right stuff. He directed Fred Claus (’07), The Change-Up (’11) and The Judge (’13) + produced a lot of films.

Wedding Crashers lasts two hours (usually but not always about 10 minutes too long for a comedy), and it almost never sacrifices story tension. And the money! It did $209,255,921 domestic and $76 million foreign for a worldwide tally of $285,176,741. 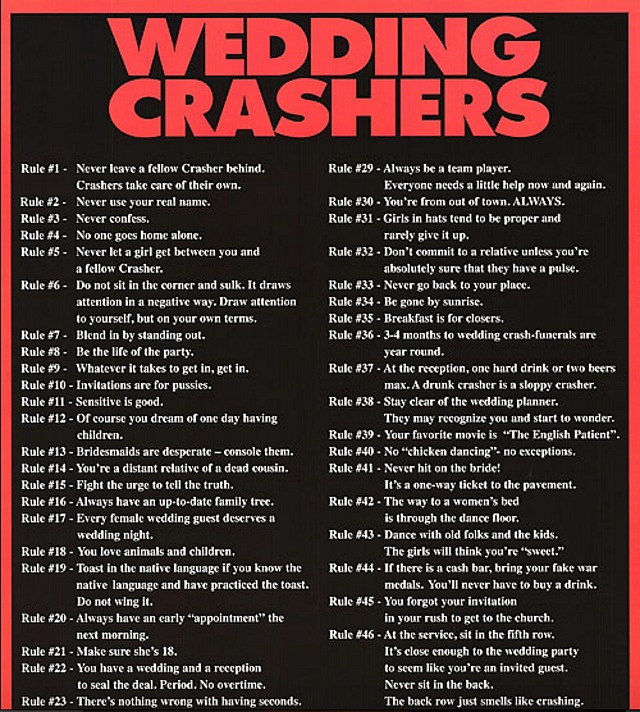 Owen Wilson (36 during filming, turning 50 on 11.18.18) looks incredibly young, and Vince Vaughn…well, nobody ever gave a funnier big-screen performance, and I’m including Seth Rogen, Jim Carrey, Buster Keaton, Groucho Marx, Harold Lloyd and Bob Hope in his 1950s heyday. Bradley Cooper hadn’t even happened at that point, and I’d forgotten about “motorboating.”

Read this 6.23.17 Tim Grierson recap piece (“The Oral History of Wedding Crashers, or: How does it feel having worked on this generation’s Animal House?”).

The diminishment comes with the attempted nocturnal gay-rape scene between Vaughn and Keir O’Donnell. Nowadays a scene like this would never even be considered in the script stage, much less shot and included in the final cut. Remember how Vaughn got in trouble back in 2010 for saying “gay electric cars” in Ron Howard‘s The Dilemma, and how the scene had to be removed?