To salute the limited opening of Richard Linklater‘s Fast Food Nation (Fox Searchlight), here’s my original riff from the Cannes Film Festival. (Six months ago…jeez, time flies.) I know I was one of the first journos to use the description “Traffic with meat.” That’s still the best three-word description I can think of.

I used to live on a second floor of a home in the Hollywood hills, on Franklin Avenue, and my landlord, believe it or not, was Mitch Mitchell, the frizzy-haired, British-born drummer for the Jimi Hendrix Experience. Darren Aronofsky‘s The Fountain has put me into a Hendrix receptivity realm for the last couple of days, and one result is that I’ve recently come across this “Hey Joe” track that’s almost all Mitch’s drums and Noel Redding‘s bass. 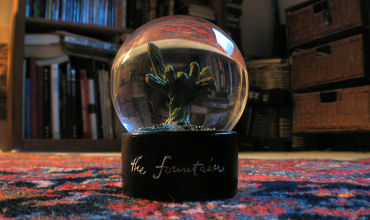 Fountain freebie paperweight…very nice. if Warner Bros. marketing knew what they had or how to sell it, they’d send out hookahs and hash pipes
November 17, 2006 6:48 pmby Jeffrey Wells

N.Y. Times reporter Sarah Lyall writing from London on how the British naysayers and negabobs who hated the idea of Daniel Craig as 007 aren’t negabobbiing any more. And the same paper’s Manohla Dargis had this to say in her review: “Successful franchises are always serious business, yet this is the first Bond film in a long while that feels as if it were made by people who realize they have to fight for audiences’ attention, not just bank on it. You see Mr. Craig sweating (and very nice sweat it is too); you sense the filmmakers doing the same.” 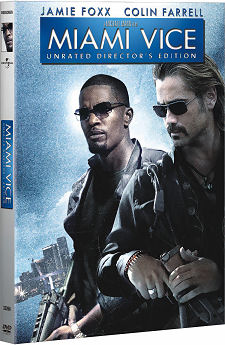 There’s this very bright older guy who teaches a film course at a major university, and a somewhat younger man who works with him — call him College Guy — saw Mel Gibson‘s Apocaylpto recently, and he shared his views a couple of days ago. College Guy is bright and knowledgable so I figured it couldn’t hurt to add his view to the mix. The pic opens in three weeks. Gibson and his homies will have to show it to guys like me sooner or later.
“In many technical ways, Apocalypto is as ambitious as The Passion of the Christ. But in the gut-level storytelling ways that really matter, it comes up short all over the place. It’s a by-the-numbers chase film with minimal characterization and just enough Mayan flavoring to justify the film’s impressive atmosphere. The main problem with Apocalypto, I think, is that it doesn’t quite know what it’s about.
“The themes of apocalypse and social disintegration that one might expect from this film after seeing the trailers, for example, are little more than a footnote in the film’s overall structure. Yes, there’s a solar eclipse. Yes, there’s a little girl who, at the film’s one-hour mark, makes cryptic prognostications about the fate of the hero. Or humanity. Or something.
“95% of this film is about a man named Jaguar Paw running and fighting. But Apocalypto is an action film without a truly active hero. In fact, it isn’t until about 20 minutes into the film that you begin to realize Jaguar Paw is the hero of the film — a signal that these characters are more or less interchangable. One thing for sure: Jaguar Paw is a very good runner.
“From what I understand from his interviews and website for the film, Gibson has attempted to draw parallels between the brutality of the Mayans and the senseless violence surrounding the Iraq war. Mel’s discussions of
this film, however, are far more interesting, and far more nuanced than the film itself. I suspect that during the writing and production of Apocalypto, no one dared to challenge Mel’s belief that his film is indeed about more than a violent foot chase through the jungle.
“To be fair, the version of Apocalypto that I saw had a bare-bones temp musical score and unfinished visual effects (although I barely noticed deficiencies in the latter). But neither of these factors had any bearing on the narrative itself, which is fairly flat throughout, and will likely remain that way when the film opens in a few weeks.
“I find Edward James Olmos‘s observations confusing — there’s not much to grab on here that would generally make a film memorable: no larger message with which to pepper a press kit without straining, no hero that fuels the story in an active or truly defiant way, no antagonist that operates above and beyond the expected physical violence that Gibson injects into all of his films.
“I suspect this film will open as a curiosity and register as a big disappointment. Framing an action chase film in Mayan civilization is a compelling idea, but there’s not enough of an attempt to take advantage of the environment in which the film is set. Gibson and his team seem to want to frame this film as some kind of immersive, historical thinkpiece, but unfortunately there’s barely a whiff of that in the finished product.
“Plus there’s the expected fissure between action-movie buffs and, you know, people who actually read subtitles. This film will likely leave both camps more than a little blue-balled.”

Film Threat’s annual listing of the Frigid 50: The Coldest People in Hollywood went up today…and it takes forever to load. It’s like trying to visit a graphic-heavy website in 1997 on dial-up. Plus I disagree with their putting Mel Gibson at the top of the list. He’s been dead meat for so long it looks like up to me. Apocalypto may or may not be as good as Edward James Olmos says it is, but it’s picking up some heat now. And the re-cut, supposedly tougher Payback will be out on DVD next year. (Paramount Home Video refused to send me a copy, but a guy from New York is sending me one.) Mel’s career may be so profoundly and tectonically dead that I may be missing the bigger picture, but i see at the very least a slight upswing. Maybe. Unless Apocaylpto is, like, really tedious.

“If you start too high with comedy, there’s nowhere else to go. Three jokes to a page can be monotonous. Little Miss Sunshine is subdued. By starting low you’re able to add a bit of absurdity and meet the characters as real people, not trying to wring comedy out of them. You don’t have to like them at first as long as you buy the reality they’re in. It’s okay to be boring for 20 minutes as long as you are laying the groundwork for things popping on page 21.” — Little Miss Sunshine screenwriter Michael Arndt to Hollywood Reporter columnist Anne Thompson in her just-posted “Risky Business” column.
The only thing bothersome thing is the title — “‘Closet screenwriter’ Arndt comes into light.’ It comes from a quote from producer Albert Berger, saying that he never knew Arndt (whom Berger knew when he worked for Matthew Broderick) was a “closet screenwriter.’ People are always skimming and reading on the fly, and Thompson had to know what the first thought-spasm (as opposed to the first considered thought) would be.
The other thing I didn’t care for is Thompson’s description of Arndt’s apartment as “cheap” — i.e., small, dingy, cockroach-infested. I’ve stayed there and by NYC standards it’s a nice, decent-sized crib.
Here’s my own Arndit interview which ran two or three weeks ago.

The San Franciso Chronicle‘s Mick LaSalle on Fat Al…Gore, that is. And La Salle’s odd attraction to the idea of Gore running again for President in ’08. It would be great if Gore were to run a campaign as a way of keeping environmental concerns in the forefront, but c’mon…he’s said over and over and over that he’s not running, and if he did he’d look like yesterday’s news standing next to Barack Obama. The only way a Gore run could possibly ignite would be if he dropped 30 or 40 pounds. I’ve always felt there’s a slight disconnect between a guy preaching prudence and caution in the consumption of dangerous fuels when it’s obvious he’s needs to practice more prudence and caution a when it comes to rich foods. Gore’s weight doesn’t exactly undermine the message of An Inconvenient Truth , but it kind of fiddles with it on some level.

Here I am posting a four-day-old Michael Moore letter — pretty much unforgivable by the cyber clock, but very nicely written. It’s basically a warm, friendly, we’re-all-in-this-together-but-fuck- you-anyway message to the religious right-catering neocons who’ve done such wonderful things for this country in recent years. Victory is sweet. Rub their noses in it. Speak sensibily, gently, wisely…but make it hurt.

The interesting thing isn’t Newscorp’s Rupert Murdoch telling shareholders that Ridley Scott‘s A Good Year is a “flop” (which is sadly and unfairly true). The interesting thing is the implied, old-fogey view of the Guardian staffer who wrote the story that Murdoch was speaking too soon. Murdoch called the film a failure “despite it only being released in the U.S. last Friday,” the staffer wrote. As if a couple of weeks more could change the basic picture? Exhibitors and distributors have been saying for decades that you can tell from Friday-afternoon numbers whether or not a brand-new film is a success. These days, of course, the picture is pretty much laid out in the opening-week tracking reports (but not — repeat, not — in the tracking reports that are two or three weeks out). Yes, word-of-mouth sometimes accumulates and gradually turns a weak or modest opener into a surprise hit (The Illusionist), but rarely. 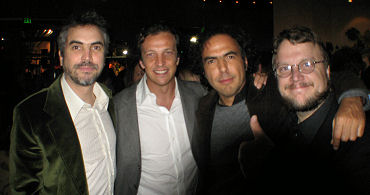 (l. to.r) The reigning Latino-auteur “three amigos” — Alfonso Cuaron (l.), Alejandro Gonzalez Innaritu (second from right), Guillermo del Toro (r.) — whose landmark films (Children of Men, Babel and Pan’s Labyrinth, respectively) easily rank among the very best of ’06, standing with Pursuit of Happyness helmer Gabriele Muccino (second from left) at last night’s triumphant Children of Men screening in Westwood. A futuristic-Orwellian action thriller, Men is utterly gripping and top-grade, but Emanuel Lubezki’s camerawork — all hand-held, several very long takes (including three that are extremely long…mind-blowingly so) — is the stuff of instant legend. I was frozen in my seat, eyes riveted. Any film buff who fails to see this film at least twice while dragging along all his/her friends is not a film buff. Cheers also to Jim Clay and Geoffrey Kirkland’s production design, which evokes a ruined, apocalyptic future in a thousand ultra-detailed ways — Tuesday, 10.24.06, 6:25 pm
November 17, 2006 8:45 amby Jeffrey Wells