Ever respectful and always affectionate, Jett called to wish me Happy Father’s Day today. This was snapped sometime around late ’91 or early ’92. Jett was four; Dylan had just turned three. We’re looking at a video feed of ourselves. 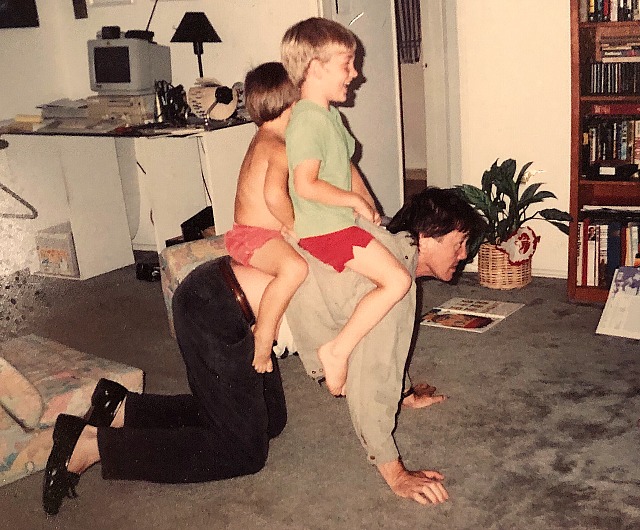 After that somewhat disappointing Booksmart tally ($19.7 million after 24 days compared to $121 million domestic for Superbad) and Late Night‘s slow showing ($5.5 million after two weekends), the question is when will a woke + younger women movie break through and become the next The Devil Wears Prada ($124 million domestic)?

Maybe $25 million-plus grosses just aren’t in the cards for this kind of fare. Is it permissible to say that woke-minded scripts seem to be appealing to a fairly narrow slice of the viewing public? And that this slice tends to get narrower when you…forget it.

The somewhat wokey Long Shot managed $30.2 million but that was aimed at the low-rent Seth Rogen faithful; Charlize Theron was an added ingredient.

Donald Trump to chief of staff Mick Mulvaney: “My God, man…can you control yourself or what? I’m doing an interview with George Stephanopoulos and you cough? I’m talking about my taxes and you fucking cough? Are you a child? Coughing is a sign of nervousness and uncertainty — ask any Broadway producer. Next time you’re seized by an urge to cough while I’m doing an important interview, please leave the room. Only men are allowed in this room. If you’re going to behave like a 12 year-old with the sniffles, you have to leave.”

12 Comments
Justice In The Jungle

The controversial highlight of the just-concluded Sydney Film Festival was the adverse reaction to Jennifer Kent‘s The Nightingale (IFC Films, 8.2) during a 6.9 screening at the Ritz Cinema.

Except I saw The Nightingale three or four days ago and didn’t think it was quite as horrific as Sydney festivalgoers did. Rough stuff, yes, but delivered with a kind of stylistic restraint.

Set in 1825 Tasmania, the film is a rough-round-the-edges revenge drama in which Clare (Aisling Franciosi), a young Irish convict, is determined to pursue a cruel British officer (Sam Claflin) and three underlings after they rape her and then murder her husband and baby. Clare hires Billy (Baykali Ganambarr), an Aboriginal tracker, to guide her through the island’s jungle-like wilderness on the trail of the killers. The audience complaints were about two scenes in which Clare is savagely raped, the second time in gang fashion. Her infant child is also killed in the latter scene.

Give all this negative build-up, I was surprised by how much I admired and respected The Nightingale, the awful cruelty and brutality notwithstanding. Kent is a very scrupulous and well-focused director, and she’s simply incapable of delivering over-the-top violence for its own sake. Start to finish The Nightingale feels well-honed and exacting. It depicts terrible things, but it’s not a wallow. It conveys a sense of justice and appropriate balance.

But there’s also a point in The Nightingale in which which everything changes and it all kind of falls apart — the story tension vanishes. It happens somewhere around the 75% or 80% mark when Clare loses her nerve in her quest for revenge. From that point on it doesn’t work. Because the film has delivered what William Goldman used to call a “drop-out” moment -— i.e., when something happens that just makes you collapse inside, that makes you surrender interest and faith in the ride that you’re on. You might stay in your seat and watch the film to the end, but you’ve essentially “left” the theatre. The movie had you and then lost you, and it’s not your fault.

When we think about the current climate of political terror (left-radical finger-pointing, shrieking condemnations on Twitter, threats of Danton-like beheadings and social shunnings), we tend to associate this with the politically correct intensity of the last two or three years, or since Donald Trump became President. But I was reminded this morning that the first stirrings began in the late aughts.

10 1/2 years ago and one month before the ’08 election of Barack Obama, I was severely beaten, gouged, kicked and bloodied by p.c. goon-squad types for mentioning a friend’s against-the-grain opinion about Jonathan Demme‘s Rachel Getting Married.

Demme’s film is not really about the marriage of the alabaster Rachel (Rosemarie DeWitt) and Sidney, a handsome Afrique-ebony guy (Tunde Adebimpe) as much as the travails of Rachel’s older sister Kim (Anne Hathaway), and especially her drug and alcohol problems and general inability to restrain her attention-whore tendencies during the wedding festivities.

The paragraph that landed me in hot water: “A friend has observed that the way Demme portrays the [film’s] African-American and Jamaican characters — Sidney, his Army-serving younger brother, his parents and the various musicians and guests who float in and out — reps a form of benevolent reverse racism. He does this, my friend argued, by making certain that only the white characters — Rachel and Kym and their parents, played by Debra Winger and Bill Irwin — are the screwed-up ones. Antsy, haunted, angry, nervous, gloomy. But the darker-skinned characters are all cool, kindly, radiant, gentle, serene.”

This is actually a dead-on observation, but the goon squad wasn’t having it. Here was my response:

“You guys sound like a typical personification of the morally and ethically superior media p.c. elite. Admonishing from a hanging-judge perspective or vantage point, but also speaking from an ivory tower.

“All I said is that Rachel Getting Married felt annoyingly fake — unnatural, restrictive — for two reasons in this context. One, only the white characters have any hangups or interesting character wrinkles of any kind, and two, the fact that nobody in the entire wedding ensemble over the weekend makes any kind of observational innocuous remark about the Sidney-Rachel dichotomy.

“Every good movie is a product of the mind and sensibilities of the director (or the director-writer) but if the auteurist card is overplayed a movie can end up feeling like the movie is taking place on another planet, or at least in another hemisphere.

“You’re telling me that in real life (and not in the rarified world of Demme Land) that nobody would say anything about Rachel-Sidney? Nothing? With the dialogue that we’ve all been hearing all across the country for the last year or so about the ‘elephant in the room’ in the current presidential election?

“With this country being a little more than 235 years old, and a once-significant (if extremely dated) Stanley Kramer social issues movie about the difficulty of accepting an interracial marriage on the part of the bride’s parents having been released only 40 years ago? You’re saying the country has become so transformed over the last 40 years that nobody invited to the Rachel-Sidney wedding would say anything at all? Nothing?

“During the LA Film Festival I asked a question of the director of Boogie Man, the doc about Lee Atwater. I said that I don’t believe that a strong>Willie Horton-type smear campaign would be as effective today as it was 20 years ago, and I was laughed at by some in the audience — they thought my statement was close to ridiculous.

“They didn’t think, in other words, that this country has moved a single inch from where it was values-wise in 1988. And you’re telling me there are no remnants whatsoever of the 1968 mentality, attitudes and social currents that resulted in Guess Who’s Coming to Dinner? You’re living on your own planet, gentlemen.”

Also from today’s Maureen Dowd column; the Doonesbury thing has been pasted to the inside of my closet door for the last 26 and 1/2 years. 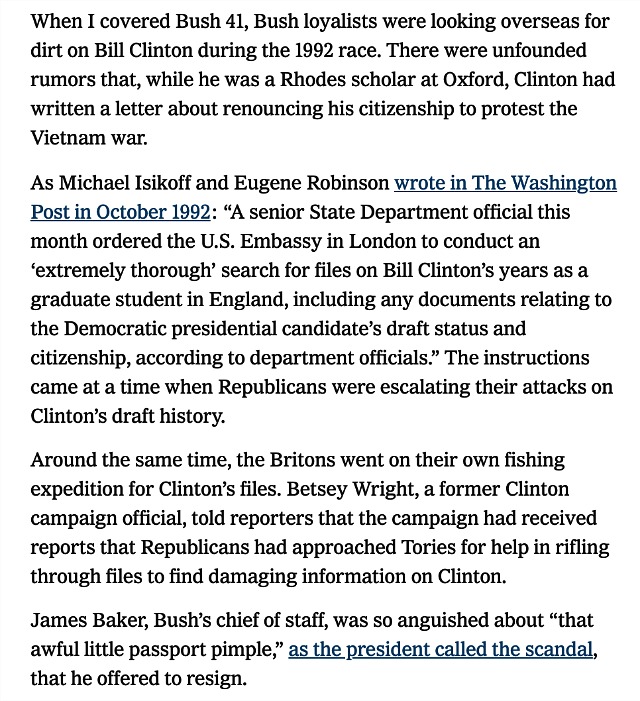 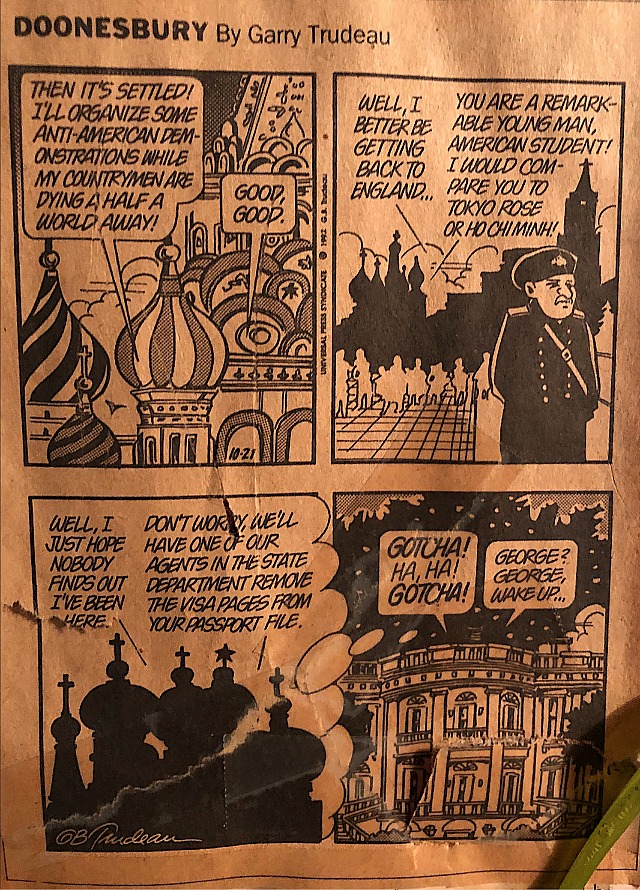 “The president is an unabashed gargoyle atop the White House, chomping on American values.
.
“The way Trump publicly wallows in his mendaciousness and amorality is unique in presidential history. His motto might as well be: ‘I cannot not tell a lie.’ His ego is too fragile to play patriarch to the country, so he takes the more ruinous role of provocateur.

“He makes it so easy for everyone to focus on the tweets and the maniacal, moronic reality show that you have to struggle to look away and take the measure of what he’s doing. And what he’s doing is altering domestic and foreign policy in terrible ways while running up huge deficits.

“The Trump White House may be a clown show and a criminal enterprise. But it’s also an actual presidency.

“It’s turning out to be a genuinely reactionary administration led by a wannabe authoritarian who refuses to recognize constitutional checks on power. The real danger is not the antics but the policies. If Trump isn’t careful, he’s going to add substance to his administration. And it won’t be the kind we want.” — from Maureen Dowd‘s “A Down and Dirty White House,” posted on 6.15.