20 Years and Then Some

It never fails. If you’ve read six or seven pans of a new movie before going to see it, it will never seem as bad as it would if you’d just seen it cold. That’s what happened yesterday when I caught Lone Scherfig‘s One Day. I had spent a good 15 or 20 minutes reading numerous Rotten Tomato slams, and so I went in expecting to despise it. And it wasn’t as awful as all that.

One Day isn’t very likable and is more irksome than not, and it’s certainly draggy and even numbing at times. But I didn’t experience mute nostril agony. I got through it.

That’s mainly because it doesn’t end with a wonderfully glorious hug and a long kiss. Well, it does, sort of…but not how you’d expect. And it’s very nicely filmed by Benoit Delhomme. And the date-announcement titles (which constantly appear due to the story taking 23 years to unfold, starting in ’88 and ending presently) are inventively used. And lovely Edinburgh, Scotland makes for nice scenery.

One Day is an occasionally passable time-killer about Emma (Anne Hathaway), a bright and attractive British lass who for 20-odd years is in love with Dexter (Jim Sturgess), a haphazardly boozy, vapidly charming, commitment-skirting flirtaholic who can’t grow up or commit and isn’t worth her attention, and certainly not ours. I hate good-time Charlies. I’d rather hang with a coke-snorting Latino gangbanger or a fat, Marlboro-smoking mafioso.

A feeling of dull horror settles in as you begin to grasp the scheme. “Oh, no,” you say to yourself. “The movie’s going to be about Hathaway’s impossible-to-suppress affection for a guy who resembles Bradford Dillman‘s character in The Way We Were?” Remember that asshole? Robert Redford‘s best friend who did nothing but drink highballs and act glib and deliver shallow quips all through the film?

The fact that Dex’s father (Ken Stott) primarily regards his son with contempt made him, in my eyes, the film’s most sympathetic and reasonable-minded character. (Stott, by the way, couldn’t possibly be Sturgess’s biological dad, to go by genetic resemblance. Nor could Patricia Clarkson, who plays Sturgess’s cancer-afflicted mom. They don’t even faintly resemble him.) 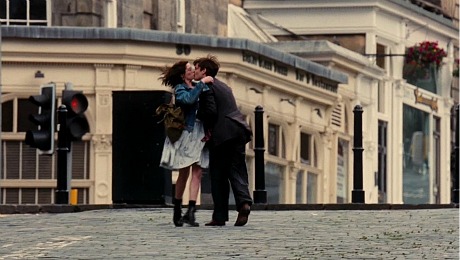 Sturgess may have given one of those career-killing performances I wrote about last weekend. Key sentence: “Every now and then an actor’s on-screen manner is so odious and unpleasant to settle into that even sophisticated filmgoers find themselves resenting the actor on some level, despite the obvious.” It’s immature and irrational to say this, but I don’t want to hang with Sturgess any more. Not after this and Peter Weir‘s Russian agony-hike movie plus Across The Universe and 21.

I love the way the makeup crew gives Sturgess moderately heavy sproutings of gray hair by the time he’s in his mid 30s. By 40 he looks like a fast-sinking cancer patient, or like a victim of Steven Soderbergh‘s Contagion virus with his eyes all puffy and rimmed with redness.

I know I’m supposed to be bothered by Hathaway’s allegedly inauthentic British accent, but I wasn’t so sue me.

Rafe Spall (son of Mike Leigh mainstay Timothy Spall) plays a would-be comedian whom Emma lives with for a few years without being in love. Every time he was on-screen I said to myself, “Anne Hathaway is not only fucking this guy but likes him enough to move in with him?” But Spall has one good line at the very end. His shaggy-sheepdog looks and vaguely bothersome performance are worth enduring for this one remark.

This isn’t a spoiler as I’m not revealing anything. I just need to get something straight. If you’re riding a bicycle through a city in a cautious and responsible way (i.e., signalling turns with your arm and all that) and you’re riding down a kind of walk-street alley that leads to a main thoroughfare with heavy traffic, wouldn’t it be a natural thing to stop at the end of the alley and check for oncoming vehicles before emerging from the alley? It would be kind of stupid to just ignore common sense, right?