Support on Patreon Follow @wellshwood
No Comments
This Is Bad

I can’t overstate what a besotted, drugged-out feeling it is to be back in Los Angeles…to once again stand on the roof of a certain West Hollywood high-rise and smell the faintly noxious air and gaze out at the milky haze and tell myself, “It’s okay…despair not.”
There is only way to live in this town and that’s to crawl into the cave of your own head and your work, and to feed off screenings and DVDs and the faces and bodies of pretty women, and to savor those special times in which you happen to be in the company of similarly diseased and/or disgruntled persons like myself.

Like, for instance, the amazing Joss Whedon.
I would find it astonishing to find myself in the pasta-and-sauces department of Pavilions and all of a sudden…Whedon! Just standing there in boring clothes like a regular mortal and telling himself, “I can’t eat pasta any more, certainly not in the evening. Face it — those days are over.”
A portion of my L.A. lethargy is indicated by the fact that I’m back to reading Defamer and going “hyeh-hyeh” like Beevis and Butthead. I didn’t go to Defamer once during the Toronto Film Festival, and not all that much when I was living in Brooklyn. I like Defamer — it’s a very well-written thing and a necessary component — but you have to be a little sick in your soul to be into it in the first place.
< ?php include ('/home/hollyw9/public_html/wired'); ?>
I could feel the old vibe swirling around me like that banshee from Darby O’Gill and the Little People, so I did the sensible thing and evacuated myself off the roof of the high-rise and made my way over to Tower Records and bought the DVD of “No Direction Home: Bob Dylan.”
I tried to wangle a freebie from the Paramount Home Video publicist who took Martin Blythe’s place, but she didn’t call back until today. I tried to buy it yesterday at Laser Blazer in the early afternoon, only to be told it had sold out. The Tower Video guys, who had plenty of copies, said it was moving moderately well but nothing to write home about.
I nodded off for about 20 minutes when I saw David Cronenberg’s A History of Violence in Cannes and I didn’t get around to it in Toronto, so tonight I get to absorb the whole thing at the American Cinematheque, more or less alert…down for it.

That means blowing off the all-media of Flightplan, but sometimes you just have to say no.
I’m a little surprised to be riffing rather indulgently about the stink of Los Angeles seeping back into my bones (that’s a Charles Bukowksi line), and I promise to get back into matters of substance fairly soon.
Except melancholia is a matter of substance if you live here.
I’ve got a screening conflict next Tuesday evening — Tony Scott’s Domino vs. Joss Whedon’s Serenity. Well, not really. I would be squirming a bit if Whedon and I were talking in the pasta-and-sauces aisle right now and he was asking me, “So, are you going?”…but we’re not so I’m cool.
The only thing that gives me concern about Domino is an observation in David Katz’s profile of Keira Knightley in the current issue of Esquire. He says that Domino is “a messy movie, often intentionally, often not.”

For years the notion of Catherine Keener being in this or that film was not, for me, a reason to celebrate. She always seemed to play users, takers, manipulators… usually more pissed off than not.
Not each and every time, but I know this impression started to take hold in the late ’90s. I liked her frustrated actress character in Living in Oblivion back in ’96, but I remember going “whoa” after she played the heartless Maxine in Being John Malkovich.
I forget how many other razor-blade women she played in other films, but it seemed as if there were more than a few.

Now I feel rather differently, and all due to Keener’s last four roles — Daniel Day Lewis’s would-be signficant other in The Ballad of Jack and Rose, the quip-smart government agent in The Interpreter, Steve Carell’s sweet, spiritually-centered love interest in The 40 Year-Old Virgin, and Harper Lee, Truman Capote’s patient, all-seeing best friend, in Capote.
The Capote performance ought to result in a Best Supporting Actress nomination. It really and truly should — I can’t imagine anyone saying “no, I disagree” — and not just because Keener is so moving and touching in this role, but because of her image change.
I’m presuming I’m not the only person with this impression. Keener has always been a “good” actress, but now I think of her in terms of who I perceive her to be possibly be, based on an amalgam of the last four roles.
I was thinking of mentioning this during last night’s discussion at the Los Angeles County Museum’s Leo S. Bing Theatre after a screening of Capote, but it seemed too kiss-assy.
Keener, looking great, was sitting there along with her Oscar-worthy cohorts — director Bennett Miller, Philip Seymour Hoffman (a lock for Best Actor), Clifton Collins, Jr. (near-lock for Best Supporting Actor), and screenwriter Dan Futterman (ditto in the Best Adapted Screenplay category).

LACMA’s film department head Ian Birnie asked each a single question, and then asked the audience to chime in.
I asked Hoffman and Miller if they had somehow tried to suggest that Hoffman, who’s about 5’10” or so in real life, was closer to Truman Capote’s height of 5’2″. It sure seems this way in the film. They ignored my question, but Miller delivered a good line: “Philip lost 40 pounds and 4 inches for this role.”
I also asked about a little kid whom Capote happens to notice during a brief visit to a grocery store. About three years old, the kid has a toy pistol and does a kind of Diane Arbus-y routine for Capote with two or three grotesque expressions. Miller said this scene was some kind of tribute to Arbus….whatever.
A woman friend who came with me called Capote “one of the best films I’ve ever seen.” It sure as shit is one of the best of the year, a fact expected to be acknow- ledged by the Academy.
Wait a minute…have I said this before?

“I’ve seen Steve Zallian’s All The King’s Men, and it felt to me like a very mature, richly adult political drama that carries considerable end-of-year pedigree.
“Major kudos, first and foremost, to Zallian for his subtle way of telling a story. All too often in telling convoluted, multilayered stories of this kind, filmmakers rely on excessive exposition to make sure that anyone can follow the plot without having to pay too much attention.
“Zallian goes the other route — details and plot twists are implied rather than explained, and this technique affords the film much more credibility. 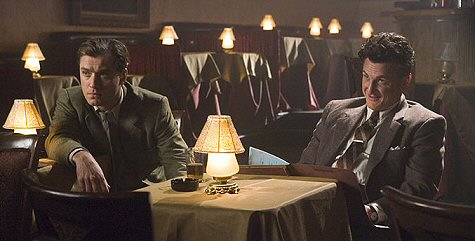 “Performances are strong all around, though Tony Soprano.. er, James Gandolfini struggles a bit with his Southern accent.
“There are two leads, Sean Penn’s Willie Stark — a wildly passionate and utterly corrupted Southern governor — and Jude Law as a tortured and crestfallen reporter named Jack Burden.
“Penn seems to be a much stronger contender for your Best Actor Oscar balloon. He delivers exactly what Academy voters are thought to love, giving a bombastic, almost Pacino-esque performance. And yet I would be much more excited to see Law’s performance be rewarded come awards season.
“And Zallian’s camera work compliments his sophisticated script nicely.
“What was shown was a work in progress (visually grainy, using pieces of the musical scores from Fargo and The Shawshanbk Redemption, to be sure, but one that shows significant promise.” — John McGilicutty

“In response to your Wired item about Joss Whedon, my first advice to you is this: as you prepare to rip or praise him in whatever fashion you intend, remember to tread very, very lightly.
“The man’s fan base is as rabid as that for any geek property out there, and if you do decide to trash him, you should be prepared for hate mail on the level of whatever Star Wars or Lord of the Rings flaming you’ve received over the years.
“Now, that being said, the idea of ‘getting’ Whedon is not something you will be able to do from just watching Serenity. It’s an impossibility.

“The film is a continuation of a TV show that only a small but very devoted group of people watched in its original incarnation and more discovered later on DVD. Whedon’s appeal cannot and will not be understood by those coming to the film cold which, I feel, will kill it financially. If it does manage to catch on beyond the fan base, then great. But I don’t think anybody, beyond his most ardent followers, is expecting much.
“As for critics and columnists (like yourself) who are coming to the film cold, I fear that the response will be mixed to negative, as they will be reviewing the film on its own merits and not as a part of the larger whole. There is nothing wrong with this — it is their job. The best thing I can say to them and you is please, go easy.
“Serenity is a gift to Whedon’s fans, to provide closure on a TV series that they watched and enjoyed and which was snatched from them far too soon. I feel that a theatrical film was absolutely the wrong way to go on this, and that the property would have been much better off in a miniseries or TV movie on the Sci-Fi channel, in hopes of finding a new TV life.
“But Universal is taking a chance on Whedon and I truly hope that it works out for them.
“As for ‘getting’ Whedon, there’s really not much to get beyond the fact that the man has produced some great, great television (Buffy the Vampire Slayer and its spinoff Angel). 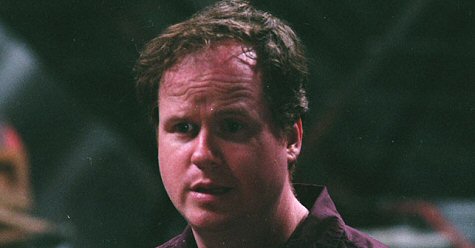 “His appeal can be gleaned from the fact that he takes high-concept approaches to well-worn genre shows (in Firefly’s case, the space opera and the western), fills them with sparkling wit and humor, and populates them with real, fully-dimensional characters that think and feel and hurt, where actions have real consequences and tragedy doesn’t always beget triumph.
“For years, Whedon managed to do the impossible in creating TV that didn’t take itself too seriously while, at the same time, taking itself absolutely seriously. He elevated genre television in the same way that David Chase elevated dramatic television with The Sopranos. This is what his fans reacted to, and why they continue to follow him into whatever avenue he chooses to pursue. I proudly count myself among them.
“Jeff, I don’t see you as the kind of person who will see Serenity, and rush out to pick up any of Whedon’s TV work on DVD, but this is really the only way to understand his appeal. The movie itself won’t do it. Just don’t judge the man on this film alone (or his spotty film record thus far). It’s not fair to him or to the fans that respect him.” — Mark of Boston, Mass. 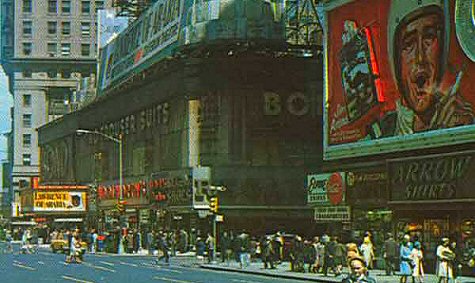