A “pretty significant sequence” was cut by director Bryan Singer from Superman Returns that will turn up on the “special edition” DVD. Singer calls it “kind of a fun look into Superman’s journey off the Earth into space.” Big deal.

Merger stories are so damned fascinating. I’m kidding. You have to pay attention and all, but like I wrote last January when I first heard of the planned merger of Lionsgate (it was called Lions Gate back then) and MGM, there’s no cosmic dimension to the mere shifting of funds from one entity to another, no more than the daily ebb and flow of the seas.

If I were a N.Y. Times media columnist with a vanquished drug problem in my past, I’d probably leave well enough alone. It appears that David Carr (a.k.a., “the Bagger”) is made of sterner stuff. He has my respect and interest in what he comes up with.

China does a 180, shuts down The DaVinci Code, lies about why. This plus their reaction to Lou Ye’s Summer Palace during the Cannes Film Festival makes Beijing seem more tilty-quirky than usual.

“I’d been hoping to shadow a writer for a show on a major network, [and] I was looking for some hands-on experience to round out a rather theoretical film school education, and hoped to gain some as an intern on [his] show,” writes Andrea Janes in the N.Y. Press‘s film issue. But this writer would come running onto set screaming, ‘There’s no Diet Coke in the fridge! Hello!? Interns!’ That’s when I questioned what I was getting into by entering this field. I wanted to pay my dues to figure out the industry, but on this particular show, interns’ primary duties consisted of sorting the mail and stocking the fridge.” There is nothing more tedious than an intelligent younger person looking to gain a foothold by interning who doesn’t get it and and in fact gets all surly and offended when people expect him/her to do drone-work. People who get it — who don’t have any problem with shit work because they know the truth of Jean Anouilh’s words in Becket, which is that “honor lies in the man, my prince, not in the towel” — are always the ones who move up. Interns have to be bushy-tailed, period. That’s the job. And if they aren’t…sack ’em! 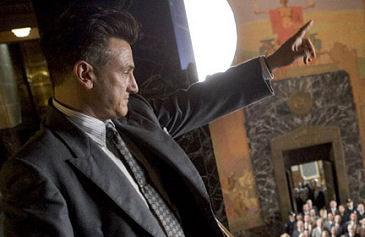 “I can watch the world through Michelangelo Antonioni ‘s eyes forever. He is the greatest stylist of the modern era, and The Passenger may be my favorite film,” David Thomson has written in The Guardian . “It’s the one I think of offering whenever people ask that question. And they ask a lot. 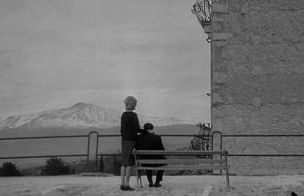 “No, it’s not in my top ten, but sometimes I think [The Passenger is the one I like the best, by which I fear I mean it’s the film I’d most like to be in, instead of just watching.” Dream-projecting ourselves into films we really like is what many — most — of us do, I think, when we’re really taken by them. And when we’re watching films that we respect or admire but aren’t that into, that’s all we’re doing — watching from our side of the window. Every time I’ve re-watched any of Antonioni’s five or six greatest — La Notte, Blow-Up , L’eclisse, Il Grido, L’Avventura — I’ve felt this exact same urge to dissolve into a spectral cellluloid spirit, and disappear into the world of these films and wander around and maybe never come back. What would it be like to hang around in an Antonioni film after the movie is “over”? Mesmerizing, I would think. But what if a malicious side of this fantasy manifests? This is obviously Purple Rose of Cairo idea (and probably some Japanese horror-film director’s also), but what other films have readers wanted to literally dissolve into? The reason Mia Farrow leaves the physical realm is that she desperately wants to belong to the world of those silver-toned, champagne-sipping sophisticates in the film she’s been watching in that 1984 Woody Allen film, but what if films were to reach out and kidnap this or that audience member at random (or, better, for a reason) and suck them body-and-soul into their worlds, whether they want to be absorbed or not? Complete this sentence: ‘I can think of nothing more torturous than to be forcibly vacuumed into the realm of [the name of the film].” My Personal Worst along these lines: 20th Century Fox’s Dallas movie, with or without Jennifer Lopez in it.