The Devil Wears Prada costars Stanley Tucci to Anne Hathaway: “What do you expect? You’re flinging those melons around like it’s harvest season.” Flinging! A couple more items like this and “Page Six” is out of the doghouse.

Whoa, whoa…Pirates of the Caribbean: Dead Man’s Chest runs two hours and 35 minutes, give or take? A cartwheeling fluffball mascara-and-attitude romp should run a minimum of three hours, I should think. If I were Jerry Bruckheimer I would add an overture, an intermission, and entr’acte and exit music.

“I’m beginning to wonder if Pirates is not only going to blow everything out of the water this year, but if it’s going to take the three-day record from Spiderman. I didn’t go to the screening last night, but I sent my girlfriend and she reported that it’s not only incredible, but that it had the junket audience applauding as well. If Jerry Bruckheimer, Gore Verbinksi and Johnny Depp can do that to the hard-core critics and cynics, think what it’s going to do for the civilians.” — Journalist colleague. Wells reply: You’re probably right about Pirates blowing everything out of the water, etc., but junket journalists have never been my idea of “hard-core”. They talk very cynically in private, but they tend to be generous in the presence of talent and publicists, so I don’t know how much stock you can put in their applaudings.

The point of this David Poland piece seems to be that the traction-penetration effects of marketing campaigns aren’t showing up in surveys until…what?…two weeks before the nationwide release date (or is it one week?), so anyone who runs tracking data on a film three weeks out is misunderstanding the way things work and creating unfair havoc in the process. I certainly experienced the downside of this when I ran those negative early-bird numbers on The Break-Up, and I’d like to think I’ve learned something from this. But of course, Poland has to get ugly by referring to a wave of “journalists” who are fixating on tracking…the quote marks meaning, of course, that people who’ve reported tracking aren’t journalists, and that “they are proving that a small amount of information is truly a dangerous thing,” he says. Well, I try to double-check tracking figures at all times. Three companies provide regular data, and it’s out there, and I’m certainly not passing along anything that any distributor or marketing outfit hasn’t already read or heard. I’m presuming that the readership knows that tracking data, like any political survey, always follows by a few days what people are ostensibly thinking and feeling. It is never in front — it always chases. And sentiments about upcoming movies can turn on a dime, as we’ve recently seen. That said, are we supposed to regard the consistently lower-than-they-should-be numbers for Superman Returns as complete poppycock? Sometimes tracking tells the wrong story and sometimes it doesn’t. One company reported this morning that Adam Sandler ‘s Click has a 44% definite interest and that Pirates of the Caribean: Dead Man’s Chest has a 68%, and it means absolutely nothing that Superman Returns has a 41% definite interest? The fact that SR‘s definite interest tallies have never crested 50% almost certainly means something. You can’t say it’s absolute total balderdash. Somewhere out there people seem to be saying to themselves, “Who needs another Superman film, especially one that wants to pretend it’s 1983 and that Richard Pryor‘s Superman film never existed.” What matters, of course, is what will happen when people finally see it starting next Wednesday. We all know it’s going to “open”, but who knows what the vox populi shakedown will be? To me Superman Returns is a moving and very personal film, but a journalist pal who’s seen it told me this morning he’as flabbergasted by the rave reviews. I’m hoping he’ll be in the minority, but let’s see.

Nobody ever seems to destroy anything in low-budget films, but expensive stuff often gets blown up and inferno’ed in big-budget franchise pics. Is there anyone in the world who finds these spectacles exciting in any way, shape or form? Is there a metaphor I’m missing that action fans have understood all along? That beautiful yellow whatever-it-was sports car that was blown off the ground inside the gates of Vatican City in Mission: Impossible III…an absolute flat-liner. Like all explosions. Filmmakers keep using them, I assume, because they’re a kind of visual punctuation. This would be fine if fireballs were the equivalent of a simple period, but they’re not — they’re exclamation points, which only bad writers resort to. All I know after reading this item is that I’m now a lot less interested in seeing Casino Royale. 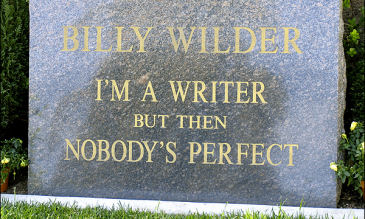 Former N.Y. Daily news critic Jami Bernard‘s “Incredible Shrinking Critic” blog (which I really shouldn’t be linking to, given her alliance with a certain hammerhead), and a video piece she’s recently thrown together about how life feels now without a portfolio.

When you flip through the 32-page newsprint program for the L.A. Film Festival, everything suddenly comes into focus. Compared to the chore of finding your way through the ruts and ravines of the online site, the paper program is clearer, simpler and much easier to sort through.

That said, I’ve been half-persuaded to check out Ian McCrudden‘s Islander, about a lobster fisherman (Thomas Hildreth) going through a crisis. (It plays on 6.25 at 7 pm at the Mann Festival — check out the site for the other two showings.) “A really solid piece of work,” a somewhat interested party claims. “Hildreth is a find, as are Amy Jo Johnson and Judy Prescott as two women he becomes involved with in the film. Costar Philip Baker Hall is his usual outstanding self. Definitely worth a look if you can catch it.”

Former Boston Herald freelance film reviewer Paul Sherman has dynamited his career over the crime of selling approximately 117 feature film screeners to online pirate distributors (known as “warez” groups) from 1999 to June 2005. He may not do time because he’s cooperating with the FBI, but he deserves whatever punishment he gets. The ethical-moral breaches are thoughtless enough, but he’s also a small-timer. As Sir Thomas Moore says to Richard Rich in A Man For All Seasons, “Why Richard, it profits a man nothing to give his soul for the entire world…but for Wales?”