Someone else has finally written a strong gripe piece about John Ford‘s The Searchers. The author is Stephen Metcalf, and his article ran yesterday (Thursday, 7.6) on Slate. I took a stab at expressing my divided feelings about Ford and his post-1948 westerns in a piece that I ran in mid-June. (Apologies for last night’s Slate/Salon mixup.)

Between 9.22 and 12.15, or in less than twelve weeks’ time, Columbia will open six films with high-pedigree profiles that could figure in the year-end award cycle — a high-powered political melodrama, a bloodless period costume drama, and three-and-a-half heart/relationship movies of an upscale bent. And although it’s not currently discussable, the studio may release still another relationship flick (a good one) before the year’s end. That’s a lotta refinement.
Steven Zallian‘s All The King’s Men, a reputedly feisty political melodrama with Sean Penn in the lead role, will be first out of the gate on 9.22.
Sofia Coppola‘s Marie-Antoinette, which I hated after seeing in Cannes (although I respected the craft and discipline that went into making it) opens on 10.20. It’s probably a lock to land the same kind of tech Oscars that Memoirs of a Geisha wound up with last March.
The heart/relationship flick of uncertain strength (i.e., the halfer) is Ryan Murphy‘s R-rated Running with Scissors (10.11), about a young man’s tumultuous relationship with his self-centered, bipolar mom (Annette Bening).
The first full-on relationship flick (i.e., one with a clever-cat stylistic approach) is Mark Forster‘s Stranger Than Fiction (11.10). I tried reading Zach Helm ‘s script last year and found it clever (maybe too clever), but I’ve been told by someone who’s seen it that it plays quite nicely. The cast includes Will Ferrell, Emma Thompson, Maggie Gyllenhaal, Queen Latifah and Dustin Hoffman.
On 11.24 The Holiday , a relationship drama written and directed by Something’s Got to Give‘s Nancy Meyers, will open with a cool-sounding cast (Cameron Diaz, Kate Winslet, Jude Law, Jack Black, Ed Burns) and a story about a kind of swap deal — an American girl (Diaz) with relationship woes and a British woman (Winslet) going through the same shit.
The last entry in the heart-relationship cavalcade is Gabriele Muccino‘s The Pursuit of Happyness (12.15), a father-son relationship drama with Will Smith as a beleagured dad.

“Screen comedy is at its best when it pitches its tent close to the poverty line. The minute the effects budget swells, it starts to crush the life out of comedy, which needs empty spaces to roam and some quality alone with the audiences in order to enlist its complicity in its subversions. It is, I think, a universal truth of movie-making that effects are never funny. They can sometimes wow you, but they can’t make you laugh, and [Johnny] Depp cannot stand up to the hubbub they create. No actor can. He can only serve them, which involves him in derring-do that any actor could do about as well as he can. He needs to be involved with us, not with the lunking machinery of the movie.” — Time critic Richard Schickel on…uh-oh, I’m going to get attacked again for running another anti-Pirates item. But I swear I’m running Schickel’s piece because it happens to be very well-written.

21 Comments
Summer is Over

The summer is over. I can feel it in almost every phone call I’ve made over the past four or five days. Everyone’s talking about September, about the Toronto Film Festival, about fall slates, Oscar campaigns, possible Oscar contenders either dropping out or being added, etc. The first viewings of Miami Vice and Lady in the Water will happen next week, there’s Snakes on a Plane on the way and ComicCon happens later this month, but the turn-your- brain-off, cruise-along, what’s-the-next-idiot movie-we-have-to-see? summer mindset is just about done. I realize it sounds silly to write off the seven weeks remaining between now and Labor Day, but mid-July is when the Oscar campaigns start to be formulated and when journalists start to disengage from You, Me and Dupree-type films and look forward to more nutritious fare.

The Pirates 2 opening-weekend numbers should be assessed in context. If it beats Spider-Man‘s three-day opening-weekend record of $114.8 million (established four years and two months ago), it would be thorough and fair to compare the number of theatres Spider-Man opened in to the 4,133 “situations” where Pirates 2 is now screening. And if it doesn’t break the Spider-Man record …well, ask “Ari Gold” — Jeremy Piven‘s Entourage character — what the industry will think about that. And let’s also consider what the second-weekend falloff percentage might be. If you look at what this film really is as opposed to what average moviegoers (i.e., those fine folks won’t read the critics or consider those Rotten Tomatoes ratings) are hoping it might be, is it realistic to suggest that anything less than 45% to 50% revenue drop will happen? I’m just asking — I don’t know anything. I’m just saying that before analysts start writing their euphoric gush pieces over the coming Pirates haul (complete with an expression-of-ecstasy quote from Paul Dergerabedian), they should step back and think it over a second time.

Wim Wender’s “last five films were made in America, something he says he never intended, [and] the next will be made in Germany, probably in collaboration with [one] of the pillars of the ’70s New Wave, Peter Handke,” reports The Age‘s Stephanie Bunbury. “Perhaps Don’t Come Knocking” — Wender’s latest film, which he made with his Paris Texas partner Sam Shepard — “represents the end of another era in Wenders’ career. For more than a year now Wenders has had everything in storage, preparing to leave the [U.S.] for good.” In other words, Wenders needs to “go German” again and revitalize that haunted romantic-Teutonic existential gloom thing. Good move, but this article, perhaps unfairly, seems to portray a once-legendary artist scurrying back home with his tail between his legs.

The thoughtless vulgarian in me would get a kick out of playing this Taxi Driver video game…I’m half-serious. It was designed by Papaya Studios, and was supposed to be distributed by Majescoe Entertainment. 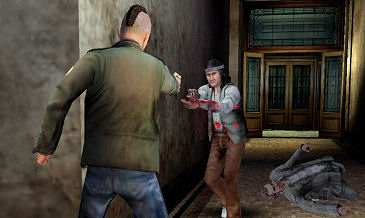 The idea is, of course, grotesque, and yet there’s something about the perversity of a video game allowing the player to become Robert De Niro‘s Travis Bickle, everyone’s favorite nutbag taxi driver, and get that Mohawk haircut and put on that Army surplus jacket and that sliding-gun arm device and go hunt down Harvey Keitel ‘s Lower East Side pimp and who knows how many others? Maybe Peter Boyle‘s burly cab driver or Charles-Pallantine-for-President staffers Albert Brooks and Cybil Shepherd or maybe Pallantine himself…it’s totally diseased beyond measure.
The Taxi Driver game was announced last year, but I became interested again when I read this 7.6 Guardian interview with Paul Schrader, screenwriter of the original 1976 Taxi Driver , which Martin Scorsese directed. It said that Schrader and Scorsese, appalled at the idea of the game, tried to have it stopped only to learn that they’d signed away the power to do anything about it in their original contracts.
Majescoe was supposed to issue the Taxi Driver game earlier this year, and (I’m obviously not plugged into the video-game world) yet I couldn’t find any reviews or even a release date. I called Majescoe this morning and was told they had severed their deal with Papaya. The numbers I called after this — Papaya’s Irvine office #, plus several for reporters and reviewers who write for video mags — didn’t lead anywhere because everyone’s at the VSDA Convention in Las Vegas. If anyone knows why Majescoe backed out, please inform.

Now is the time for all friends of Pirates 2 to rally round and provide a little positve counter-spin to all those pans by the big-gun critics, which of course will have zero impact on the coming weekend’s massive opening numbers. The point is, are you a supporter of “joy” or aren’t you? If so, you have to stand up and do what any friend would do at this stage.