Support on Patreon Follow @wellshwood
40 Comments
Mockerty of a sham

Esquire‘s Chuck Klosterman totally gets the Snakes on a Plane sham of a mockery of a mockery of a sham.
The ironical appreciation of Snakes “is based on the premise that the bad movie aspired to be good,” he says. “If a film never takes itself seriously and originates as satire, everything is different; its badness means something else entirely.” Right.
“SOAP doesn’t fit into either category: It doesn’t take itself seriously, but it’s not a satire. It will probably be unentertaining in a completely conventional way. Which, apparently, is what people want.” Apparently.
“They want to see Snakes on a Plane in order to tell their friends that it’s ridiculous, even though (a) that’s the only thing everyone seems to know about this movie, and (b) that’s been the driving force behind its marketing campaign. It’s not a bad movie that’s accidentally good, and it’s not a good movie that’s intentionally bad; it’s a disposable movie that people can pretend to like ironically, even though (a) it’s not ironic and (b) they probably won’t like it at all.” And it doesn’t matter.
“The only purpose of Snakes on a Plane is to make its audience feel smarter than what it’s seeing. Which adds up, since that’s part of the reason people like reading the internet.” Yes…yes!

I remember having a quick chat with IFC Films topper Jonathan Sehring and IFC marketing exec Ryan Werner near the end of last year’s Toronto Film Festival, and being asked what I liked that hadn’t been picked up. I said I was pretty taken with Abel Ferrara‘s Mary, which I’d seen a night or two earlier. Obviously a marginal type deal, I added, but it felt to me like Ferrara’s best since Bad Lieutenant. The costars are Matthew Modine, Forest Whitaker and Juliette Binoche. 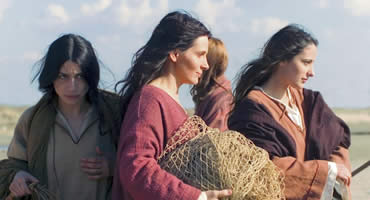 Here it is almost a year later and after the usual prolonged wrangling, IFC has picked up domestic rights to this “long-languishing film,” as Stu Van Airsdale reports and describes on his “Reeler” blog.
Here’s another idea for IFC: as an extra on their Mary DVD, they should include Not Guilty, Rafi Pitts‘ richly entertaining documentary about Ferrara that I saw and reviewed while covering the Locarno Film Festival in July ’03. (I’d provide a link to my Not Guilty piece, but my colleagues at the site formerly know as Movie Poop Shoot have taken down my column archives.) The doc never turned up anywhere else, but it seemed quite good to me.
Stu says there’s “no word yet” on a Mary release date, “and the details do not specify whether or not IFC will be releasing via its First Take day-and-date arm.”

Talladega Nights got a B from CinemaScore. If a movie’s getting a solild positive response it gets an A or an A-minus. Anything below a B-plus means the word isn’t sensational. Perhaps this explains that 12% Friday-to-Saturday drop last weekend. I would figure on Talladega business being down 45% to 50% this weekend, or a gross in the low 20s.

John Horn is reporting that an L.A. Times/Bloomberg poll about movie-viewing habits says youths “are willing to watch brand-new movies at home rather than in theaters, are starting to use their [computers] as their entertainment gateway and are slowly turning to their iPods and cellphones for video programming.” Fine, but some of the wording in this story feels vague.
47% of 12 to 17 year-olds contacted by Times/Bloomberg pollsters say they “would” watch a movie on a computer, which is higher than the percentage of those amenable to watching films on their cell phones (11%) or video iPods (18%). What does “would” mean in this context? I “would” eat a hotdog made of ground-up gorilla intestines if I was desperately hungry enough, but would I order one if I could just as easily order a nice Greek salad with warm pita bread on the side? Watching a flick on a decent-sized laptop screen is okay, but who in the world would willingly settle for this with an option of seeing a film on a 36″ flat-screen, a 60″ high-def screen or a movie screen?
The Times/Bloomberg poll seems to suggest that picture size, sharpness and richness of texture don’t matter as much to younger teens as they do, say, to older movie buffs in their 30s or 40s. We all know younger teens teens don’t have access to plusher viewing modes, amd yet something tells me they’re not that enthused about micro-screen viewings. There’s a big difference between being okay with something and seriously liking it.

Congrats to Ronan Graffiti’s Steven Santos and Marcus Levy for throwing together this trailer for Signs of Anti-Semitism, a forthcoming Mel Gibson thriller. It starts out perfectly, peters out a bit, then rebounds with a Woody Allen clip at the end. If they’d only made the font for the words “of Anti Semitism” exactly the same as that for “Signs”. It’s still pretty good though.

I guess we’re never going to see any stills of Ben Affleck in that those old, clunky-looking TV series Superman suits he wears in Allen Coulter‘s Hollywoodland (Focus Features, 9.8). He wears them in two or three scenes — the brown-and-gray tunic (worn when the show was shot in black and white) once, and once or twice in the brilliant red and blue outfit. There must be a prohibition in effect. I don’t know why this is interesting, but here’s an exclusive shot of the two suits from IGN’s “Stax” Flixburg. 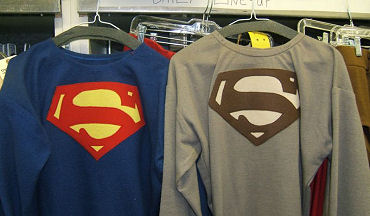 When I was at San Diego Comic-Con two or three weeks ago I flipped through a copy of Sid Jacobson and Ernie Colon‘s “The 9/11 Report”, a 144-page graphic-novel version of that 2004 document. There’s something weird about looking at comic-book images of that day and reading approximation terms like “WHOOOM!” to describe the sound of United #175 slamming into the south tower. But if you’re going to illustrate something like this I guess there’s no avoiding generic moves. Jacobson and Colon are old pros, both in their 70s. 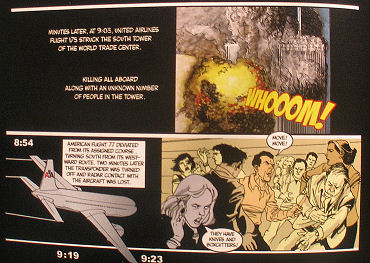 You’d think there’d be a prominent mention of this book on the site for Hill & Wang, the division of Farrar, Strauss and Giroux that’s publishing…but there’s not. (And it doesn’t turn up when you do an in-site search.) “The 9/11 Report” will be in book stores as of 8.22. The thing that would really sell, I imagine, would be a graphic novel version of Loose Change.

Women are often disrobed and filmed in a stylish, lip-smacking way in Brian DePalma’s films, and the trailer for The Black Dahlia (Universal, 9.15) seems to indicate he’s maintaining his signature. Nothing wrong with this — just predictable. The forthcoming booking at the Edinburgh Film Festival (8.14 to 8.27) is fine, but my reservations still hold.

“I’ve traveled the world and seen it everywhere — we lost the trust of the world,” World Trade Center Oliver Stone has told L.A. Times columnist Patrick Goldstein. “So now we have more death from terror, not less. We haven’t fought smartly. We’ve fought stupidly. We’ve overreached.”

The footage of the guy sitting shotgun inside Pamela Anderson‘s black SUV, quivering and bent over like a traumatized child, is like something out of a Dogma film from the late ’90s. He and Anderson are the leads in a Los Angeles tragedy by Lars von Trier.

“It’s a horror film based on an insane asylum that’s been converted into a college, and these kids that end up going to this college all have dark secrets in their past. [The college is] haunted by this doctor who used to perform lobotomies on kids, thinking he was doing a good thing for them by erasing their nightmares, but he was actually really sadistic. So it’s twisted and gory and psychological.” — Snakes on a Plane director David Ellis talking about Asylum, his next contribution to the rigor and glory of cinema. It begins shooting on 9.18 in South Carolina for Hyde Park Entertainment, with 20th Century Fox apparently having some interest in distributing.

Writers — serious writers of books and plays as opposed to, say, journalists — are not very interesting people to make films about. They’re almost as bad as painters. Morose, self-destructive depressives…terrific. Unless the film follows the writer on an intense real-life adventure of some kind, as Fred Zinneman‘s Julia did with an episode in the life of the young Lillian Hellman. Or better yet, if the movie somehow injects its writer character into a surreal realm of his/her own devising, like Joel and Ethan Coen did with John Turturro‘s gloom-head screenwriter in Barton Fink, or like David Cronenberg did with a William S. Burroughs-like character in his adaptation of Naked Lunch.
The latter approach, apparently, is the idea behind Paul Giamatti‘s untitled, just-announced film about Blade Runner author Phillip K. Dick movie, which Giamatti’s Touchy Feely Films will produce with Anonymous Content. The screenplay, to be written by Tony Grisoni (Fear and Loathing in Las Vegas), will use elements from Dick’s unfinished novel “The Owl in Daylight.” The visually surreal aspects of Tery Gilliam’s Fear and Loathing mixed with an “Owl” synopsis (found on Wikipedia) offer clues about what Giamatti’s film will be up to. In fact, it sounds like it may contain similarities to Lady in the Water as well as an echo or two from Kurt Vonnegut‘s Slaughterhouse Five and Spike Jonze‘s Being John Malkovich.
Giamatti will play Ed Firmley, a composer of music scores for second-tier horror and sci-fi films who gets mugged by a squad of deaf alien humanoids — emissaries of a species that can’t hear but enjoys amazing visual abilities — who implant a micro-chip in Firmley’s head so their brethren back home can monitor and experience his life. The aliens soon become disinterested in the idea when they realize what a cheeseball-level composer Firmley is, and from this point is where the story truly takes flight. The meaning of the “The Owl in Daylight” title is presumably self-explanatory.