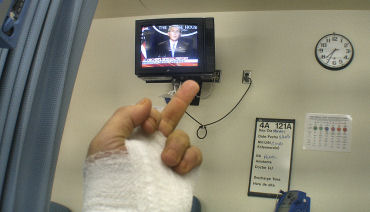 As I said once last week, I’ve changed to a dedicated server. I wasn’t aware until last Thursday that I had to register the domain name with the new server designation, blah, blah. Then the hand-infection thing happened and the server thing kinda slipped my mind. Anyway, I got it all straightened out today, so anyone who’s been having trouble clicking on the site won’t have any more trouble after, say, Wednesday noon, and perhaps sooner.

If you want to read a well-written article that indirectly tells you what’s profoundly unsatisfying about Sofia Coppola’s Marie-Antoinette (Columbia, 10.20), read this Vogue/Style.com piece by the respected writer and journalism professor Kennedy Fraser. 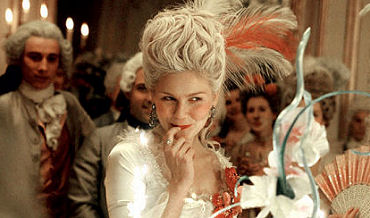 It’s been edited down from a longer version that appears in the pages on the September issue of Vogue, and I can’t imagine that Fraser would be very happy with it. It’s 21 paragraphs long — two introductory graphs about Coppola and her thoughts about what she focused in the film, and then, dropping all pretense of being any kind of behind-the-curtain piece, it turns into a mini-biography of the Austrian queen (Kirsten Dunst).
Here’s the thing: graphs #3 through #15 cover the story told in the film, the fourteenth graph tells what most likely happened when an angry crowd stormed the Versailles palace in 1789 (Fraser and Coppola differ significantly in their respctive tellings), and the last five graphs cover Antoninette’s life from late 1789 until her death by guillotine in October 1793.
Read the piece (or better yet, read this Wikipedia biography) and tell me the last four years of Marie-Antoinette’s life weren’t far more intriguing than the previous 33. Coppola’s film ignores ’89 to ’93, of course. She brings her film to a close just as things are starting to get interesting.
The odd part is that Fraser’s piece doesn’t mention that Coppola’s fillm focuses on the earlier, fluffier, less character-defining aspects of her life — that she’s made, as I put it last May, “arguably the shallowest and dullest historical biopic of all time.”

N.Y. Times reporter Sharon Waxman susses the box-office disappointment that is Snakes on a Plane. It took in a moderately lousy $15.3 million dollars at 2555 theatres, which was short of the high-teens gross that Variety said would be average for a late-summer horror film.
Waxman’s piece basically says that internet heat doesn’t mean enough for a movie looking to become an across-the-board hit. To make a really big splasht you need more than just the younger hip male crowd — you have to get teenage girls (“snakes…eeeww!”), older women (ditto) and older men (“This looks stupid”), plus you have to reach into the newspaper-reader/mouth-breather demos.
I think the online Snakes heat more or less died last May or June. It was very hot and happening in the late spring, but then New Line stuck to the 8.18 date and the fans went, “Ehh…over.”
I also think it would’ve helped if it had been a better. smappier, crazier film. An HE reader suggested a couple of days ago that Samuel L. Jackson should have had gotten into a last-minute wrestling match with the big anaconda and then blown a hole in the side of the plane and the snake had gotten sucked out. The camera could have followed it all the way down and watched it splatter on the deck of a cruise ship. I suggested some other madball notions on Friday.
In short, if this movie had been truly mad, it might have taken off. But its fate was sealed when New Line’s production team decided to hire David Ellis. Their own cheeseball mentality is what did them in.

So the Sunday N.Y. Times (8.20) ran a piece about poker by director Curtis Hanson, in honor of his film Lucky You coming out “in October”, according to a brief explanation at the end of the piece. Of course, as Coming Soon and other sites (mine included) have recently noted, Lucky You< has been bumed to March '07.

Three or four hours after being released from Century City Doctors Hospital early Saturday afternoon, the swollen bear-claw hand and the red interstate highway streaks on my left arm had returned. My resources drained by my 16 hours at CCDC, I had no choice but to check into the UCLA Olive View County hospital in Sylmar. I stayed there Saturday night and all-day Sunday and am leaving today. And I think things really are cured now. My hand was actually operated on yesterday and the infection has been removed and I’ve been told I’m over the hump.
Intravenous antibiotics administered for 16 hours at CCDH on Friday and Saturday morning had merely suppressed the infection for appearance’s sake. The chumps at CCDH didn’t want to actually attend to the swollen, senstive-to-touch, pus-filled wound on my left palm (they were afraid of something going badly — private medicine procedure today is all about fear of possible malpractice lawsuits ), and by 5 pm Saturday I realized I had to go back into another hospital for Round 2.
I’d been told by a doctor at a Beverly Hills walk-in clinic a couple of days earlier that Olive View was “nicer than USC County”, so I drove up the 405 and onto 5 and into Sylmar — right up against the mountains in the northernmost area of the San Fernando Valley. I eventually found the hospital and was admitted to the Olive View emergency room by 8:30 pm.
Right away I knew I was dealing with very smart, ultra-focused doctors and nurses — professionals of a much higher order than the ones I encountered at CCDH. The Olive View doctors and nurses are straight off ER and St. Elsewhere and other TV shows of that type, by which I mean they seemed to say and do the right professional thing at all times.
A friendly, youngish, no-b.s. ER doctor named Bloomfield anesthetized, lanced and excavated the wound, and I was given more doses fo antibiotics Saturday night and all day Sunday. Another doctor and a small team performed a 15-minute operation late Saturday afternoon (I was put to sleep with a general anesthetic), and staffers gave me all kinds of pain medication and more antibiotic drips after I got out.
So I’m out of here this morning, and thank goodness for the stirring George Clooney goodness of the doctors at Olive View. Bloomfield is going to be featured on an upcoming epsode of some Discovery channel show about unusual medical experiences, or something like that. (I’ll pass along the details later.)
Do not ever go to Century City Doctors Hospital for anything, including directions. All they do is sedate and placate and get as much money as they can from you. I wouldn’t exactly call them a disgrace to their profession, but they’re contenders for that distinction. What they did for me on Friday was equivalent to a guy going to a hospital with a broken leg and the doctors saying, “Well, we’re not too sure we want to get into the leg part, but here’s some pain medication and we’ll send a therapist to your room so you can discuss your feelings.”
I’m typing this from the Olive View hospital library. The only thing good about CCDC is that they have broadband computer hookups in each private room. But that aside, forget it. They even refused to give me a copy of my medical chart so I could give it to the Olive View people. Or rather, they said I could have a copy but I’d have to come back to the hospital and fill out a form and give them $23 dollars, and then they’d fax it to me within 2 to 10 business days. I was told this by a bitchy senior nurse named Linda, who works on the 4th floor.

Will someone good at subterfuge and pretend guises please slip into the development room — stealthily, like a panther — and while George Lucas, Steven Spielberg and Harrison Ford aren’t looking (or are out putting quarters in the street meters), pick up a pillow, lean over the crib and smother the Indy IV project until it’s dead, dead…deader than dead? With compassion, I mean. Like the Will Sampson‘s Big Chief did to Jack Nicholson‘s Randall Patrick McMurphy in One Flew Over the Cuckoo’s Nest.