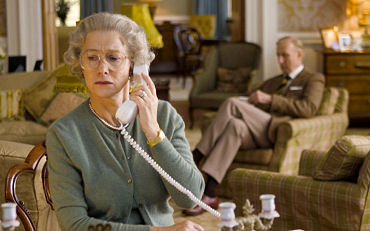 I leave for the Toronto Film Festival in five days (I like getting there early), and I’ve just done a re-scan and there are at least five high-profile festival selections that are putting out mild distress signals. No torpedo holes, no manning the lifeboats, but expressions of concern on the captain’s face. It means dredging up old material and I hate that, but I can at least re-review the situation with three of them:
(a) Steven Zallian‘s All The King’s Men (Columbia, 9.22) — This Mike Medavoy– produced period political drama has been giving off sputtering noises since it was yanked almost a year ago from Sony’s late ’05 release schedule. I’m not implying it’s a bad or even half-bad film — it might be half-decent or even good — but Sony won’t pre-screen it and Medavoy won’t even pick up the phone which tells you there are feelings of uncertainty behind the palace gates. And Sean Penn‘s delivery of his Willie Stark speeches, shouted and bellowed with that cracker-barrel hick accent, exudes a kind of profound anti-charm. And Sony’s decision to open Men in late September rather than October or November hints at something also. Any way you cut it, Men is coming into the festival with a wounded rep;
(b) Emilio Estevez‘s Bobby (Weinstein Co., 11.17) — Estevez is a director who has demonstrated his chops three times before (Wisdom, Men at Work, Rated X), and I just don’t see this one working out all that well, especially with all the problems he had during production. That really funny Bobby story written last year for Esquire by screenplay polisher John Ridley includes a crew-member judgment that the script reads like “an episode of Love Boat ’68.” And then there’s that Bobby one-sheet, which uses three lines that Sen. Ted Kennedy spoke in his eulogy speech for his slain brother during the funeral service at St. Patrick’s Cathedral: “He saw wrong and tried to right it. He saw suffering and tried to heal it. He saw war and tried to stop it.” Bobby is not a biopic, and this ad copy therefore reeks of dishonesty. And there’s also that initial announcement that Bobby is going to be screened as a “work in progress”.
(c) Anthony Minghella‘s Breaking and Entering (Weinstein Co., 12.8) — The campfire talk a few weeks ago was that Harvey Weinstein was on the fence about Minghella’s film coming out this year. (Harvey changes his mind all the time, but still…) And an Oscar campaign stategist not employed by the Weinstein Co, told me a while back that the word on B & E was that it wasn’t quite Oscar-calibre. It now has a 12.8 platform release plan, but Weinstein has mulled bumping it into the winter or spring of ’07. Smell the air, do the math.

Every so often but especially at the close of summer, a Variety reporter or two will write a story about how the formulas or genres that seemed to be working a year or two ago don’t seem to be working any more. Trying to calibrate the willingness of ticket-buyers to line up for this or that kind of film based on apparent trends or sociological currents is horseshit, of course. Movie-making is about inspiration, talent and gambling, and either you get that and run with it or you don’t.
Most producers and studio execs don’t, of course. Most are afraid to even go in the water, much less take a dive off the high board.
The underlying theme of these boring-ass articles is that producers and studio execs are terrified down to their knuckles at the idea of getting behind a film (in an idea or script form) or making a decision to greenlight a film based on a love of what the film could be and a deep desire to see this potential realized. Almost nobody thinks or operates like this, of course — they all want insurance and safety and rules they can depend on. In my book, that makes them cowards, milquetoasts, dilletantes.
These end of-the-summer Variety pieces — this latest one is written by Ian Mohr — also tend to conclude that stars seem to be less and less of an assurance that audiences will show up in force. Only Adam Sandler delivers! And only when he’s in a typical Sandler-brand comedy. Which means (and you don’t have to tell Jeff Blake this) that Reign O’er Me, good as it is (with a truly fine Sandler performance at the heart of it), is no slam-dunk.

Here’s a good Ben-Hur joke that I never heard until today. The oar slaves on the warship that Ben-Hur (Charlton Heston) has been condemned to serve on (the one commanded by Quintus Arrius, the senior Roman officer played by Jack Hawkins) are told to listen up by a galley commander. “I have good news and bad news,” he announces. “The good news is that we won’t be going into battle today against the Macedonians.” And the oar slaves all whoop and cheer. “The bad news is that Arrius wants to go water-skiing.”

C.C. Goldwater has her day in the N.Y. Times sun, talking about her grandfather, Barry Goldwater, and more particularly the doc she produced, Mr. Conservative: Goldwater on Goldwater, which will debut on HBO starting 9.18. Directed by Julie Anderson and co-produced by Tani Cohen, it reconfigures the image of the late Arizona Senator and 1964 Republican President candidate as a kind of liberal-styled libertarian…a fair-minded, independent-minded guy in the vein of, say, John McCain or maybe even a bit to the left of that.
I saw Mr. Conservative in late June at the L.A. Film Festival. I always respected Goldwater for being a helluva lot more candid than most politicians and especially for sticking to his philosophical guns at all times, but this doc provided a fuller acquaintance. My two favorite bits from the doc: (a) Goldwater’s two points of advice to son Barry, Jr., about hound-dogging, which was to “keep it out of town”, and “if you’re not successful by midnight, go home and get some sleep“; and (b) a story about Goldwater being denied a chance to play golf at a certain country club back in the ’50s because of his Jewish name, and his replying that “I’m only half-Jewish from my father’s side so what if I play nine holes?”