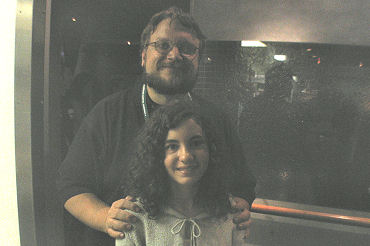 The first words that came out my mouth this afternoon as I watched the closing credits of Todd Field‘s Little Children were “very interesting.” It’s a wee bit cold and a little bit strange, but it’s also a very poised (i.e., stylized but not overly so), carefully composed art film — and as such it has my complete respect.
That sounds like I’m holding back, doesn’t it? I’m not trying to. I just don’t know how else to put it.
It’s less naturalistically moving than Fields’ In The Bedroom, but then it’s a step up from that film — Fields isn’t trying for similar moods and tones. It’s certainly one of the most impressive suburban malaise films I’ve ever seen, in part because the feelings of dread are constant and unnerving. Every step of the way you’re thinking, “Something really bad might happen here.”
This is not a film looking to warm anyone’s heart — that’s for sure. And yet it brings compassion and insight and exquisite humor to its story, which is based on a novel by Tom Perrotta (who also wrote Election), who co-scripted with Fields. It’s a story about characters and situations that I partly recognize and certainly believe in, with almost every one seriously handicapped in one way or another.
Little Children may be better than I’m able to give it credit for right now, three hours after seeing it at the Varsity. I know I haven’t seen anything like it in a long, long while. It’s immensely satisfying and pleasurable to watch a film as ambitious and precise and high-strung as this, and yet it’s not a soother. This said, I’m not sure if it’s an Oscar derby movie or not. I can see how some might find it too queer for their tastes, and I can see some being excited — turned on — by its apart-ness.
This is a film about emotionally arrested adults — 30- and 40-somethings who desperately need to live in their own private dreamspaces, and hang the consequences.
I really loved the perfectly phrased narration (read by Will Lyman), which reminds me somewhat of the dry, sardonic narration in Stanley Kubrick‘s Barry Lyndon. The turn-off element, I suspect, will be the sex-offender character (played by Jackie Earle Haley). He’s a sad, self-torturing, pathetic, very real person — a character I’m not likely to forget. Kudos to Earle for bringing something (don’t know what exactly) really fascinating to it.
Kate Winslet‘s performance, it seems to me, is a near-lock for a Best Actress nom, and I was totally knocked out by how good Patrick Wilson is — it’s the best thing he’s ever done so far, and I’m including his superb acting in in Mike Nichols‘ Angels Over America. Jennifer Connelly also, I feel, outdoes herself here.
If nothing else, this is a fascinating things-are-fucked-up-in-surburbia movie. Everyone needs to see it and chew it over. I plan on seeing it at least another couple of times.

Will Mel Gibson‘s Apocalypto really arrive on Dec. 8?” asks N.Y. Times columnist Caryn James. “As recently as last week Touchstone, the Disney division releasing it, insisted it would. That√É¬¢√¢‚Äö¬¨√¢‚Äû¬¢s about all the studio will say about a movie that must have become an albatross, because the crucial question is: How can this film be marketed? Mr. Gibson√É¬¢√¢‚Äö¬¨√¢‚Äû¬¢s name and ability to chat up Apocalypto was its only real selling point. Now he trails apologies and questions about bigotry wherever he goes, which will make it pretty hard to stay on message about old Jaguar Paw. ”

I wish I’d been awake all through last night’s All The King’s Men screening (which started at 10:35 pm). If I’d seen it all, I could maybe have written a pan as smart and frank as David Poland has written here.

This is a generic point, but you can’t write a pan of a film you’ve only seen 60% of, or even 90% of. But I’ve always maintained it’s permissible to say, “I blew this film off after 20 minutes and here’s what led to me to this.” That said (and this is also an old riff), if a film isn’t working I’m fairly sure of this ten minutes in. After fifteen minutes I know it absolutely. After 20 minutes I’m leaning forward and cupping my face in my hands. After a half hour my knees are bouncing up and down. After 40 minutes I’m looking at my watch and calculating how much longer I can stand. And anybody who says they don’t experience similar things while watching an incontestably bad film is being dishonest.

Didn’t mean to sound dismissive yesterday about Ben Affleck winning the Best Actor trophy at the Venice Film Festival. He does a solid job at getting into the frustration, rage and sadness of George Reeves . Reeves became world-famous as a result of his starring in the Superman TV series in the ’50s, and then hopelessly despondent about same — he became so strongly identified with Superman that he couldn’t land any other roles.
I wish that the film, which I respected and half-liked, would have had more Affleck and less of Adrien Brody , frankly. The latter plays a shamus hired by Reeves’ mother to learn whether or not her son’s shooting death was a murder made to look like a suicide. Brody’s gumshoe is not the sharpest tool in the shed; he’s vaguely motivated and a bit of a loser. The decision by director Allan Coulter to focus on his flopping around as much as it does is what makes Hollywoodland frustrating to sit through. 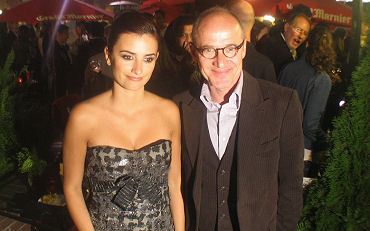 Gabriel Range‘s Death of a President, which screens tonight in Toronto, “does not take the assassination of [George] Bush as the premise for entertainment,” the 32 year-old director tells Toronto Star critic Peter Howell. “It’s the starting point for what I hope are some quite serious reflections on these extraordinary times we live in.” Here’s the piece, which apparently is the first significant interview that Range has given about the film.

In another N.Y. Times Sunday piece, James Ulmer tells the tale of David Geffen ‘s long-standing reluctance to have Dreamgirls made into a feature, and how director Bill Condon and producer Larry Mark managed to change his mind. Other stories are passed along in the piece, but this is the most interesting.

N.Y. Times staffer David Halbfinger profiles All The Kings’ Men director-writer Steve Zallian, apparently without his having seen the finished film. He writes that ATKM “is already being talked about as an Oscar contender,” but he qualifies this by mentioning that Robert Rossen‘s original 1949 version, starring Broderick Crawford, won the Best Picture Oscar “and no remake has ever matched that feat, Academy researchers say.” 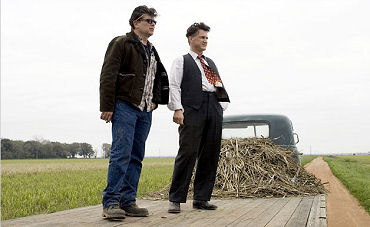 This seems to me like a typical N.Y. Times evasion. Halbfinger has surely dug around and been told what many, many people are saying about this film, which is that it’s problematic on various levels (sluggish, creaky, talky) and will almost certainly encounter limited enthusiasm from the public, but he chooses instead to mention a statistic that implies that Oscar glory may be elusive.
There were expectations that Zaillian’s film would open at the end of ’05, but “when test screenings revealed that audiences were confused about the basic relationships among the main characters, Columbia Pictures agreed to delay the opening, and Mr. Zaillian went back to work.” Eight months later Zallian “has emerged from almost a year of near-solitary confinement in an editing room to pronounce All the King’s Men a finished product. His producers are hoping it will prove his masterpiece.”
All the King’s Men stars Sean Penn, Kate Winslet, James Gandolfini, Patricia Clarkson, Mark Ruffalo and Anthony Hopkins. It’ll open nationwide on 9.22 following some special screenings in New Orleans.
I tried to see it at 5:30 pm yesterday afternoon at the Varsity, but I lost heart when an announcement was made that there were almost no seats available (I was standing near the end of a long line) so I went to three parties in succession and came back for the 10:30 pm screening. Unfortunately, the champagne at the parties on top of the usual late-night fatigue factor messed with my concentration.
I definitely saw portions of ATKM — somewhere between half and three-fifths, I’d say. I know that the parts I was awake for (and I was very alert and attuned during my waking moments) felt enervated and boring. I know that the photography has a kind of drained sepia quality, and that a lot of the scenes are shrouded in dark- ness and flavored with lots and lots of southern-fried, neo-Faulknerian dialogue.
Clarkson has at least one great line: “The world is full of sluts on skates.”
I’ll have to take another shot at seeing ATKM when I get back Los Angeles, I guess. Or on DVD four or five months from now.

Heartening news about Werner Herzog’s Rescue Dawn being acquired by MGM, given all the financial and post-production mucky-muck this project has been coping with.

Festival fatigue and misdirected brain cells led to my conveying an “understanding” a day or two ago that Sony Classics was looking at giving The Lives of Others, Florian Henckel-Donnersmarck‘s masterful film about spying and intimacy in East Germany in the mid ’80s, a one-week qualifying run in New York and L.A. before opening it in February to coincide with the Oscar nominations. Duhhhh….one doesn’t need to open a foreign-made film in the States to be considered for Best Foreign Film — it simply has to be submitted by the country of origin (which in this case is Germany) following a theatrical run there in ’06.
Sony Classics co-chief Michael Barker told me last night he wants Others to open free and clear of the dominance of the big Oscar-worthy December films. “I don’t want it to be anyone’s second choice,” he said. “This is a first-choice movie and I know the word-of-mouth will carry it through once it opens, which is why we’re thinking February. ”
As I wrote with some confidence two days ago, Others, is all but guaranteed to be nominated as one of the five Best Foreign Films. It won 7 Lola Awards (Germany’s equivalent of the Oscar) — for Best Film, Best Director, Best Screenplay, Best Actor (Muhe), Best Supporting Actor (Ulrich Tukur) and Best Production Design.
http://hollywood-elsewhere.com/archives/2006/09/triumph_of_othe_1.php