A friend of The Departed (no title, no name, no gender) passed along a view today on the absence of Martin Scorsese‘s The Departed at the Toronto Film Festival. Warner Bros., he/she said, “felt that the movie was too commercial to be presented at a film festival like Toronto’s.
“Playing at Toronto, they felt, can give audiences a sense that it’s an art-house style film. I know that many would disagree with this view, but they felt that there was no real upside in screening it there when they know that they have a hit film on their hands.”
To which I say, “Excuse me?” A good movie is a good movie is a good movie, and critics at Toronto going apeshit for The Departed (assuming they will or would have gone apeshit) would have meant nothing but commercial heat and buoyancy all around. Instead WB kept it out of circulation and let a lot of people think (i.e., speculate, wonder, guess, presume) there was something wrong.
They could have at least allowed visiting critics and columnists to see it here in Toronto, but no — they restricted access only to people taking part in the New York junket. Brilliant neg-head thinking, guys. Hats off.

Baaah….baaah. Jonathan King‘s Black Sheep, a horror comedy, suddenly became the big hot-pants Toronto film after a well-received midnight screening last night. Sales rep John Sloss is reportedly fielding several offers. Meanwhile I tried to get into a screening of the damn thing this afternoon at 3 pm, but I was shut out. Baaah. Last night someone told me there was some heat on this film. Another person said the same thing this morning. A publicist friend wrote today and said, “Have you seen or heard anything about this yet?” Baaah.

Stu VanAirsdale (a.k.a. “the Reeler’) submits a snippy-rippy review of movie fall-preview pieces by six or seven Manhattan publications.

Reuters guy Arthur Spiegelman went to last night’s Toronto Film Festival premiere of Death of a President and has reported that it received a “short burst” of “mild applause from an audience that seemed more interested in how it was made than why.” He also writes that “moviegers left with mixed feelings, with one American tourist calling it overhyped but interesting.” 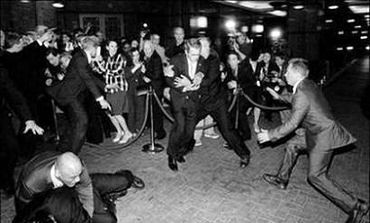 Producer-director Gabriel Range “complained there had been a rush to judgment about his film, spurred by both its subject matter and by a still photo from the movie that superimposed President George Bush‘s head on an actor being shot,” Spiegelman writes. “Many of the questions for Range concerned how he managed to make the film so realistic and whether authorities in Chicago, where it was filmed, knew what he was doing.”
That’s the part that has me interested — the purported realism of the footage. That’s why I’m making Tueday’s press screening come hell or high water.
DOAP “opens with demonstrations against Bush as he visits Chicago in 2007. As he leaves a hotel after delivering a speech, he is shot by a sniper in a nearby building. A police hunt leads to the arrest of a Palestinian man on flimsy evidence. Later the man is convicted of the assassination and kept in prison even as evidence points to another man as having committed the crime.
“Despite the sensationalism of its subject matter,” Spiegelman observes, “the film tries to be a low-key and sober look at the effects of Bush’s post 9/11 policies on U.S. society, especially on civil liberties.”
“I hope we portrayed the horror of assassination,” Range said. “There have been plenty of fictional films about assassination and I don’t think anyone would get the idea of assassinating Bush from this film.”

Anne Thompson is running video links on her Risky Biz blog to a post-Rescue Dawn q & a with director Werner Herzog and star Christian Bale, and also a post-Borat q & a with Sacha Baron Cohen. 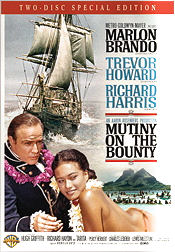 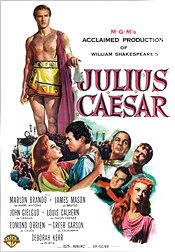 Miami Herald critic Rene Rodriguez has seen Martin Scorsese‘s The Departed here in Toronto, and he’s calling it “class-A pulp…grave, resonant, psychologically complex and acted to the skies.”
And that’s not all: “Anyone who’s been waiting for Scorsese to return to form after the Oscar-baiting turgidness of The Aviator and Gangs of New York won’t be disappointed,” he’s written. “This is Scorsese’s best and most invigorating work since the underrated Casino, if not GoodFellas, as well as his most sheerly entertaining.”
If Rodriguez is on the money, then what is Warner Bros. publicity’s problem? They’ve got something that allegedly works on a feisty-pulpy crime-movie level and yet they send out signals left and right that it’s got issues, that they’re concerned about reactions (as indicated by a clear reluctance to show it), that “it’s not a festival movie,” etc.?
Rodriguez’s view is just the first word and he may end up 180 degrees apart from the eventual general consensus (or not), but if he’s right WB publicity has created a totally unnecessary neg-head smokescreen about this film.
If on the other hand what Rodriguez is saying appears in hindsight to have been a bit too breathless, then what WB has been doing makes sense…I guess….but this is becoming more and more fascinating by the minute.

Last night Little Miss Sunshine was handed the Deauville Film Festival’s Grand Prix award — hooray for that. The smart, sometimes darkly-shaded comedy, directed by Jonathan Dayton and Valerie Faris and written by Michael Arndt, “was met with loud applause and raucous laughter when it was shown at the festival ,” blah, blah. Deauville’s Jury Prize went to Ryan Fleck ‘s “Half Nelson”, and the award for Best Screenplay and the International Critics’ Prize went to Laurie Collyer‘s Sherrybaby.

In a Leonardo DiCaprio profile that went up on 9.10, L.A. Times writer Mary McNamara conveyed that unlike the vast majority of entertainment journalists thus far, she’s actually seen Martin Scorsese‘s The Departed (Warner Bros., 10.6), in which DiCaprio costars with Matt Damon and Jack Nicholson.
The film “burrows into the Boston underworld [and] is vintage Scorsese, rife with grit and gore and more expletives than Snakes on a Plane,” McNamara writes. “As a cop who infiltrates a mob run by Jack Nicholson, DiCaprio stands fully baptized into the Scorsese canon, smashing gangsters in the head with beer mugs, holding fellow officers at gunpoint and going mano a mano with Nicholson in all his maniacal glory while trying to decipher the code of true loyalty.”
The Departed‘s press junket will happen in Manhattan later this week. I’ve been asking for the last two or three days about attending a local press screening of The Departed in Toronto, but the responses have been vague. Last night a visiting publicist told me that a journalist told him that a local screening had been slated for either yesterday or today. These developments on top of the weeks-old decision not to show The Departed at the Toronto Film Festival obviously sends out a certain type of smoke signal that I don’t have to decipher for anyone.

I think Marc Forster‘s Stranger Than Fiction (Columbia, 11.10), which preemed at the Toronto Film Festival over the weekend, is maddening in its lack of clarity — its inability to make simple unified sense of all the strands.
But there’s no one correct way of seeing it. Emmanuel Levy is calling it “a moral fable, a wake-up call for all [who] would like to change our story. The movie touches on a universal fantasy , the notion that we have inner voices in our heads that tell us what to do and how to be.”
What Will Ferrell‘s Harold Crick character “discovers in the midst of the film’s incredible events is how to escape all that and really begin to enjoy his existence. All of the characters, including Harold’s wristwatch, end up doing little but significant things to help save one another, underlying the theme that the people and things we take most for granted are often the ones that make life worth living and actually keep us alive.”

9.11.01 happened five years ago today…take a moment. It seems like a soft day at the Toronto Film Festival, which means there’s a bit more time to stay with www.cnn.com and watch CNN’s streaming replay of its 9.11.01 coverage — precisely as it unfolded, minute-by-minute — from 8:30 am to midnight.