The reason I haven’t put The Departed into the Best Picture category in the Oscar Balloon is that there’s not a whole lot going on underneath. It doesn’t have any kind of human-condition theme that hatches and builds and sticks to your ribs after it’s over. But did The French Connection, which won the ’71 Best Picture Oscar, have any kind of theme? Not that I can remember. Shouldn’t pure moviegoing pleasure — the kind that comes from a film that’s knows what it’s doing and how to deal it, and is therefore totally confident and well-ordered — be one of the criteria that qualifies a film for Best Picture? Maybe The Departed should be one of the nominees on this basis.

It’s amazing what can happen when the right song is laid onto the soundtrack of the right scene in the right film. This special chemistry happens for reasons I don’t yet fully understand when Martin Scorsese uses John Lennon‘s “Well, Well, Well” in a scene in The Departed — a scene between Leonardo DiCaprio‘s frazzled cop-mole character and Jack Nicholson‘s grizzled mob boss.
I haven’t listened to this song in a long time, but it popped through in some live-wire way the other night when I was watching The Departed for a second time. A couple of lines of dialogue about Lennon are heard around the same time. Nicholson asks DiCaprio, “Do you know who John Lennon was?” and DiCaprio answers, “Yeah…he was the president right before Lincoln.”
The musical ride that Scorsese takes you on in this film is great — a series of late ’60s/early ’70s rock tracks that fortify the scenes (or portions of scenes) they play under, but not in any literal “oh, the lyrics are commenting on what we’re seeing” way. It’s more of a visceral -emotional thing, and it feels dead perfect.
Scorsese achieved a similar connection when he used Mott the Hoople‘s “All The Way to Memphis” at the very beginning of Alice Doesn’t Live Here Anymore. I had never given much of a shit about Mott the Hoople before seeing that film, but I always felt a measure of respect for those guys (and certainly their son) after they were processed through the Scorsese grinder.

Warren Beatty‘s Reds is having its big New York Film Festival revival showing on Wednesday, 10.4, but the Paramount Home Video double-disc Reds DVD won’t be out until 10.17. 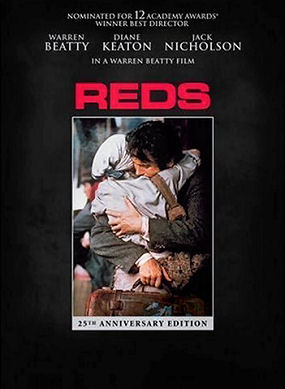 The 1981 Oscar-winning biopic of journalist and “romantic revolutionary” John Reed, beautifully shot by Vittorio Storaro, was restored at least five years ago. I know this because I was told sometime in early ’02 by Paramount Home Video exec Martin Blythe that the work had been done a while before that, and because a spotless, superb looking print was shown in concert with a Beatty tribute that I attended at the San Francisco Film Festival in late April 2002. (Here’s a shot I took of him and Elvis Mitchell at a party before the screening.)
Blythe told me around this time that PHV had wanted to release a Reds DVD but they could never get Beatty to record a narration track or participate in any retropsective/making-of documentaries. I don’t know the particulars and I’ve pretty much gven up trying to learn anything from Beatty about anything, but I know he was generally gun-shy about DVDs for a long time, saying over and over that he felt the value of a film should speak for itself.
Something finally changed his mind, however, as Beatty and and Reds costar Jack Nicholson were taped and interviewed for the DVD. The second disc contains a six-part history of how Reds came into being: (1) Witness to Reds: The Rising (about how the project came about); (2) Witness to Reds: Comrades (about the casting of the film); (3) Witness to Reds: Testimonials (about the “witnesses” featured throughout the film); (4) Witness to Reds: The March (about the location and the sets — the late production designer Dick Sylbert used to regale me with stories about this aspect, since he was in charge); Witness to Reds: Revolution Parts 1 & 2 (about the making of the film); and (6) Witness to Reds: Propaganda (about the editing, scoring, release and Oscars).
One of my first big-time interview scores happened with Beatty. It was November of ’81, and in my capacity as managing editor of The Film Journal I was looking to write a piece on Reds, and I somehow got in touch with Beatty’s producer cousin David L. MacLeod, who suggested I call Beatty back later that day. I did and Beatty picked up. We talked — fenced is a better word — and he kept saying “don’t quote me…will you please not quote me?”, but he generously set up a private screening of Reds, enabling me to see it way ahead of everyone else. That was a very nice thing for a guy like him to do for someone relatively low on the totem pole.

“Guillermo Del Toro was a man on a mission. He’d been sent a tape of Amores Perros by a mutual friend, another up-and-coming Mexican auteur, Alfonso Cuaron, who [like Del Toro] thought the movie was an overlong chef d’oeuvre.
“Though Del Toro was ‘very broke’ at the time — he’d recently paid a hefty ransom to rescue his father from a kidnapping — he caught one of the first available flights to Mexico from Austin, Texas, where he was living then.
“‘Next day, or two days after, I opened the door and I see a fat man with the face of a kid, and with very intelligent blue eyes,’ Inarritu, 43, recalls. ‘And in the next three days he ate all the food in my refrigerator but he made me laugh like nobody, he made my life so happy. And he helped me, really toughly, to get those seven, eight minutes out of it.’
“For the record, Del Toro insists it was 20 minutes, and he swears that every time Inarritu tells the story the tally gets shorter. ‘Alejandro, come on!’ he says, laughing as he relates the anecdote. ‘Next time you’re going to say we took out four minutes!’ — from Reed Johnson‘s nicely detailed L.A. Times piece about Inarritu, Del Toro and Cuaron, obviously in the same vein of Anne Thompson’s 9.8 “Three Amigos” piece in the Hollywood Reporter, only longer and more lusciously written.

Sometime around ’82 or ’83 there were two plays playing next to each other on 45th Street — one was called “Good” (written by C.P. Taylor, about an ordinary guy who becomes a Nazi) and the other was called “Plenty” (by David Hare). It was silly — bizarre, really — but those titles being proclaimed from their respective marquees looked like some kind of put-on. I remember standing nearby after the two were up and flashing and saying to myself, “This is a joke, right?”

In the same silly-ass vein we have two “good” movies coming out in December — Steven Soderbergh‘s The Good German (Warner Bros., 12.8) and Robert De Niro‘s The Good Shepherd (Universal, 12.22) which I’ve begun to refer to as German Shepherd .
The lameness of this juxtaposition plus the two-Goods-in-December are bonds of total brainlessness, agreed, but there’s more. They’re both adult thrillers, and both period pieces about cold-war political intrigues (the Soderbergh is set in Berlin in ’47 or ’48, and the De Niro flick begins its story about a James Angleton-like CIA figure in, I believe, the late ’40s). And their respective stars, George Clooney and Matt Damon, are topliners in the Oceans trilogy (Eleven, Twelve and Thirteen).
Plus the early buzz on both films is sorta similar. If I were writing for the New York Times, my editors would suggest the following sentence: “Whether these two films will be bet with critical and commercial success remains to be seen.”

Is it me, or do these Departed judgments sound vaguely similar?:
(a) “Mixing it up with modern mobsters for the first time since Casino 11 years ago, Martin Scorsese cooks up a juicy and bloody steak of a movie in The Departed…[which] pulses with energy, tangy dialogue and crackling performances from a fine cast…after the elaborate exertions of the period pieces Gangs of New York and The Aviator, it’s good to see Scorsese back on home turf” — Variety critic Todd McCarthy; 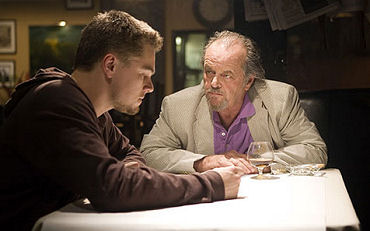 (b) “Thank God we have Martin Scorsese back…after a couple of films where one of the best directors ever seemed more intent on pleasing Academy voters than millions of admirers, Scorsese returns to contemporary crime fiction with a hugely satisfying bang” — Hollywood Reporter critic Kirk Honeycutt;
(c) “What a relief! The fabled director of Mean Streets, Taxi Driver and Goodfellas is back on the contempo urban turf where he once belonged…here, at long last, is a return to an old-school, brass-knuckles crime flick with piss and vinegar and style to burn. It may not be profound or symphonic, but it’s cause for real cheering ….after two middling efforts (Gangs of New York and The Aviator) Scorsese and Leonardo DiCaprio have finally generated real electricity.” — me.