At one point Patrick Wilson‘s Brad tells Kate Winslet‘s Sarah “that beauty is overrated, something that, as the narrator notes, only someone secure in his own beauty would say. He may nonetheless be right. But in too many recent movies intelligence is woefully undervalued, and it is this quality — even more than its considerable beauty — that distinguishes Little Children from its peers.” — N.Y. Times critic A.O. Scott in his review of Little Children.

A Manhattan-based journalist wrote me earlier today and suggested that Little Children‘s Jackie Earle Haley, who plays a profoundly creepy child molester/flasher, and Phyllis Somerville , who plays his caring, strong-willed mom, could both qualify as Best Supporting Actor nominees in their respective categories. “Both are terrific,” he enthused, “but I think Somerville’s portrait of a mother’s unconditional love is absolutely heart-breaking…just great work.”
Sommerville is wonderful, I agreed, but Haley’s sexual deviant is extremely icky. “Haley’s a fine actor and it’s good he’s back,” I responded, “but that character he plays…forget it.” The East Coast guy replied by saying “Icky is not bad, and in this case, icky is heartbreaking.”
And I said, “Because of this character, this movie is going to run into trouble with general audiences. Hearts are not going to be broken — some people are just going to be repulsed. There’s a scene in a car that happens between Haley and a nice lonely woman he’s met on a blind date, and after this scene any notion of compassion for Haley’s guy is out the window.”
My friend said, “The final beat in the arc of this character happens because of his shame at what he is. If that isn’t heartbreaking, I don’t know what is. Thanks for your compassion.” And I said, “Given what he is — a total sexual cockroach — and his behavior beforehand, what happens at the end, harsh as this may sound, isn’t that terrible a consequence. When it comes to child molesters, there’s a serious temptation to say ‘throw them into the wood chipper.'”
They don’t deserve sympathy? he asked. And I answered, “Do Catholic-priest molestors of choir boys deserve our sympathy? Do compulsive sexual abusers of any kind deserve it? I really don’t feel that way. There’s no real expectation in treatment circles that any of these guys have a chance of being cured. I’m with the right-wingers on this issue. They’re bad news. Shed no tears.”

Obviously there are two competing Oscar handicapper gangs taking shape — one at Tom O’Neil‘s “The Envelope” (expect at least 12 journos when it’s all finalized) and the return of Gurus of Gold (roughly 80% in place) at David Poland‘s Movie City News.
The Times rule is that you can’t be an “Envelope” team member plus a Poland Guru. I know there’s been some soul-searching among journos about whether to side with the Hatfields or the McCoys, and I for one have heard the crack of rifle fire over issues of alleged guru-poaching.
I know this: it’s not “early” in the Oscar handicapping racket. It’s all happening right now, fast and furious.
Just yesterday I heard uh-ohs about three big December releases, and once these stories begin to travel the films in question — I’m not going to name them — will see their stock prices begin to drop. All of this could easily fall by the wayside once they start to screen, but right now it’s starting to look as if these three now have something to prove.
The game will basically be over as of early to mid November, and from then on everyone will be just dancing. The chances of a late November or early December surprise seem slim at this stage.
O’Neill is currently working on a comprehensive choices-at-a-glance chart, and it’ll be in place fairly soon. Poland posted a Gurus chart today but I’m told that at last one respondent’s choices are about three weeks old, so it’s not exactly expressing the immediate current.
That said, the Best Picture tally has Dreamgirls slightly ahead of Flags of Our Fathers with Babel a somewhat distant (20 points behind) third.
The Best Actor race — this is a fairly early call — has The Last King of Scotland‘s Forrest Whitaker almost 20 points ahead of Venus star Peter O’Toole, and Leonardo DiCaprio (The Departed…nobody’s seen Blood Diamond yet) trailing in third place.
And the Best Actress race has The Queen‘s Helen Mirren well in front of three runner-ups — Volver‘s Penelope Cruz, Little Children‘s Kate Winslet and The Devil Wears Prada‘s Meryl Streep — with very nearly the same scores.

Sacha Baron Cohen‘s best jotting so far in his theatrical put-on campaign for Borat: Cultural Learnings of America for Make Benefit Glorious Nation of Kazakhstan (20th Century Fox, 11.3) wasn’t inviting “Premier George Walter Bush” to a screening of the film (Cohen actually went up to the White House gates on Wednesday to try and hand-deliver the invite), but the announcement that “Mel Gibsons” has also been sent one. 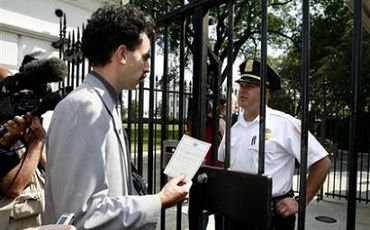 Cohen’s was at the White House to capitalize on today’s official visit by Kazakhstan president Nursultan Nazarbayev. Kazakhstan press secretary Roman Vasilenko expressed again his and Nazarbayev’s concern that some might get the idea that Cohen’s Borat — an anti-Semitic Kazakh TV reporter — is a reflection of real-life Kazakhstan culture. Cohen “is not a Kazakh…what he represents is a country of Boratastan, a country of one,” Vasilenko told Reuters.

Nobody’s bothered by Scarlett Johansson agreeing to play the title role in Mary, Queen of Scots in a forthcoming mid-budgeted historical drama on top of already playing Mary Boleyn (older sister of Natalie Portman‘s Anne) in The Other Boleyn Girl for producer Scott Rudin and Columbia Pictures? The two characters were almost alive at the same time. (Anne Boleyn was born in 1504 and died of a severed head in 1536. Mary Queen of Scots was born in 1542 and died in early 1587.) I don’t mean to carp, but I already have issues with Johansson being in period dramas in the first place.

“I think this is Leo’s year,” a director said to me yesterday. He was referring to a generally presumed one-two combo from Leonardo DiCaprio‘s performances in Martin Scorsese‘s The Departed and Ed Zwick‘s Blood Diamond. The latter has everyone’s attention because Leo has nailed his South African accent quite well, to judge from what people are hearing in the trailer. 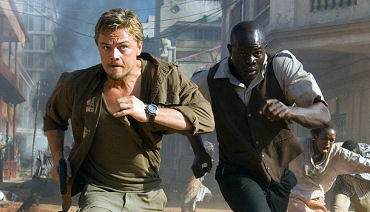 I’m developing this nob of an idea, however, that Djimon Honsou may be formidable also in that film. My information comes from an interested party so there’s nothing to consider all that heavily. And like I said before, The Last Samurai and Legends of the Fall are reason enough to instill caution when approaching a new Ed Zwick movie. And…I could say something but I won’t. I think it’ll be shown sometime in October, though, and not November.

Emanuel Levy on the art and accomplishments of Little Children‘s Kate Winslet.

David Poland is calling yours truly, “The Envelope’s” Tom O’Neil and and Fox 411’s Roger Friedman a team of “walking orifices” and “Butt Monkeys”. It has to do with my having praised Sienna Miller‘s performance in Factory Girl and then having put her on my “Envelope” Best Actress list, and O’Neil having written a piece about Harvey Weinstein intending to launch a Best Actress campaign for her, etc. I don’t know if Friedman has written anything about this, but Rolling Stone critic Peter Travers has put Miller on his Best Actress list also.
The only substantial bottom line on this matter is that I’ve seen Factory Girl and Poland hasn’t.
Harvey depends on certain journalists to push his agenda, yes, but Poland has himself turned the organ handle like a well-lubed Butt Monkey on behalf of certain films and filmmakers in the past, so let’s not play this tune too loudly. Poland’s point seems to be that Harvey has no other serious Oscar card to play with the Bobby steam depleting — maybe — and that Miller’s only chance is to nab a #5 slot due to Meryl Streep, Annette Bening, Judi Dench, Kate Winslet, Helen Mirren and Penelope Cruz being already well planted. I see Bening and possibly Winslet possibly taking a hit if their respective films, Running with Scissors and Little Children, don’t play sufficiently well with the public…we’ll see.
The only rock-solid Best Actress locks at this stage are Streep, Mirren and Cruz — and I think calling Streep’s Miranda Priestley a Best Actress performance in The Devil Wears Prada is a stretch. She’s a “lead” in the same way Anthony Hopkins was a lead in Silence of the Lambs — a lead by force of presence and magnetism. But the only one lead in that film, obviously, is Anne Hathaway.

I don’t know or care, really, if Josh Hartnett and Scarlet Johansson are still entwined and it doesn’t matter either way, but the general belief is that they met during the making of Brian De Palma‘s The Black Dahlia. If they’re still happening at this moment, by the law of Hollywood relationships the failure of Dahlia — critically, commercially — means that if they’re still together, they won’t be for much longer. Doomed. A movie is like a child — a creative by-product of an alliance that began with an on-set affair — and if it goes out into the world and is dissed by critics and the ticket-buying public, it’s like a thumbs-down on the relationship itself. Which makes the lovers feel like they’ve contracted a virus of some kind. And before you know it they’re “done.”

More Flags of Our Fathers deck shuffling: a friend tells me Clint Eastwood‘s Iwo Jima film (Dreamamount, 10.20) was scheduled to screen in the evening in Manhattan over the last 36 to 48 hours, but then it was cancelled. (That’s on top of a few people alegedly being invited and then disinvited to see it at yesterday’s L.A. screening.) Flags screened this morning in New York at 9 ayem, and then the print flew out.

On one hand those Movie City News interview clips from last weekend’s The Departed junket are cool because they’re video — robust aural-visual immediacy! On other hand the quickie-question format reduces everything to banaility. Individuals lose, the promotion machine wins…and I always feel a little less alive and more like a spoon-fed monkey in a cage when I watch one of these pieces. The thing to run (and which I would be proud to create some day on HE) would be an ongoing Jamie Stuart-type video journal. Stuart is an avatar of a streetcorner reality vs, showbiz sensibility that’s fermenting out there right now.