The shadows are getting longer and I have to make the rounds around Bend (at festival headquarters and at various opening night soirees), so I guess this is one of those days in which five items will have to do. Unless I get industrious later this evening.

Rapidly speaking: (a) Dreamgirls won’t be seen in its entirety until later this month, but it’s feeling more and more like a locomotive; (b) The Departed is Marty’s Rousing Return and a bit of a torch-bearer for the tradition of The French Connection; (c) Based on almost nothing (or virtually nothing), The Good German feels a bit pallid; (d) Little Children is all about Kate Winslet right now…if that; (e) Little Miss Sunshine is on the move again…yes!; (f) We all know about Helen Mirren‘s inevitability, but now The Queen, which seemed good but overly tidy at first, is starting to look like Best Picture material; (g) Babel is an aching, close-to-great film, and also superbly made; (h) hasn’t World Trade Center been out of the picture since August?; (i) Flags of Our Fathers is well respected, has its admirers, etc., but it’s been dissed also — no duckwalk; (j) The Good Shepherd has been sounding like a not-quite-there thing since last summer; (k) The History Boys is apparently over; (l) Bobby never got rolling; (m) Catch A Fire is as well-jiggered as a film of this sort can be; (n) The Pursuit of Happyness is automatically suspect because of Will Smith in the lead role; (o) Stranger Than Fiction died in Toronto; (p) The Last King of Scotland is entirely about Forrest Whitaker.

I’m just adding my voice to those who’ve already cheered Roger Ebert‘s re-appearance from his sick bed yesterday. “I won’t be back to full production until sometime early next year,” he said. “The good news is that my rehabilitation is a profound education in the realities of the daily lives we lead, and my mind is still capable of being delighted by cinematic greatness.”
The recovering critic assures us he “will eventually walk, talk, taste, eat, drink and live, more or less, normally. But it will be a struggle, involving another surgery to complete what began in June.
My favorite passage: “I have discovered a goodness and decency in people as exhibited in all the letters, e-mails, flowers, gifts and prayers that have been directed my way. I am overwhelmed and humbled. I offer you my most sincere thanks and my deep and abiding gratitude. If I ever write my memoirs, I have some spellbinding material. How does the Joni Mitchell song go? ‘Don’t it always seem to go that you don’t know what you’ve got till it’s gone’? One thing I’ve discovered is that I love my job more than I thought I did, and I love my wife even more!”

I landed in dry and sunny Bend, Oregon, a couple of hours ago — blue skies, clean air, juniper trees. About an hour later I checked into the Marriott Fairfield — bland, sterile, colorless, corporate…and located right next to a freeway. I’m a juror at the Bend Film Festival, which kicks off at 5:30 pm today and winds up on Saturday night. All the corporate brand stores are here in force, naturally. Remember when rural smallish towns had their own particularity, a hamlet-y feeling… far from the madding crowd? 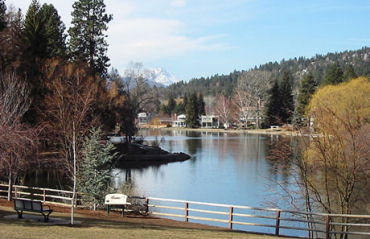 Suddenly there’s a consensus that year-end contenders are weak, weak, weak all over. It does kinda seem that way. I’m not just saying that because the more I hear about the supposed heavyweights coming out in December, the less current they seem to have. Warner Bros. managed to keep people from seeing The Departed so there was no advance word, but when a film is really exceptional and a couple of months away the word will usually seep out. A hint or two, minor leakage…something.
I realize studio p.r. people don’t want anyone saying anything about their Decem- ber films — too damn early — but people are talking anyway. Talking by not talking, I mean. Or by giving you a look at a party, or saying something incon- clusive or abruptly changing the subject. Dreamgirls doesn’t have to worry about anything, and I’m not saying German/Shepherd, Blood Diamond and The Pursuit of Happyness necessarily need to either. I’m just saying there’s beaucoup silence out there.
The perception of weakness makes it all the more likely that The Departed will end up as a Best Picture contender. (In a stronger year it could wind up being dismis- sed as merely a well-made crime film — the fact of it being an exceptionally well-made crime film is why I’m feeling more and more that it has Oscar strength.)
It’s also a welcome thing that Little Miss Sunshine, easily one of the year’s finest no matter what the mainstream winds up deciding, will start picking up renewed heat. This is Pete Hammond ‘s view, at least, in his latest Hollywood Wiretap column.
And I’m amused by the take-it-or-leave-it bluntness of this statement from David Poland ‘s latest Oscar prediction column, to wit: Bill Condon‘s Dreamgirls “is clearly the Best Picture frontunner now that Flags of our Fathers [has] stumbled on exposure to the media (even if the trades and others are still barking up that flagpole).”