After trying for nearly a week to get hold of an mp3 file of Bobby Kennedy‘s “mindless menace of violence” speech that’s heard during the final moments of Bobby — it easily constitutes the most moving portion of Emilio Estevez‘s film– I discovered today that it’s the final track on the original motion picture soundtrack. Thanks to the Weinsten Co. publicist who sent it over today. It’s hard to hear the words with the music mixed in, but give it a listen — it really sinks in. 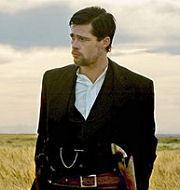 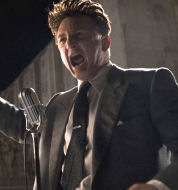 Here’s a site that lets you futz around with music and images from Darren Aronofsky‘s The Fountain…okay. Obviously a kind of promotional “Hail Mary” pass but fine. Clearly, curiously, not enough people are getting into this film. It has only a 50% positive Rotten Tomatoes rating. I told Aronofsky when I saw it late last summer than anyone who’s taken LSD or mescaline should definitely be receptive to it. Not to be overly simplistic, but could some of the difficulty come down to the fact that not enough people out there are sufficiently “experienced”? (Well….I am.) Those on the fence may want to at least consider Devin Faraci‘s CHUD rave.

Running a link to material as dusty and creaky as this is pretty close to unpardonable, but this YouTube video of Sacha Baron Cohen‘s visit to the Jon Stewart show is truly fascinating. Cohen’s natural British accent is mesmerizing…in a very relaxed and affable way. He’s witty as shit. On top of which (and for some reason I find this extra-surprising) his hair is thinning. For me, it revives the whole Borat thing because now there’s an engaging real-life guy behind the mask. (The James Lipton story is hilarious, by the way.) Cohen needs to try a different Borat p.r. mode and do some follow-up interviews as himself. It adds to the intrigue. Everyone’s sick of his in-character routine — time to shift gears.

All I was trying to do was get to Josh Horowitz‘s story about Judd Apatow declaring that Borat should be an Oscar Best Picture contender, but the MTV.com’s site is way too layered and complicated and show-offy. Way too much stuff that needs to load before getting to the story. Wells to MTV.com webmaster(s) — please let guys like me access Horowitz’s material without trying to saturate my head with all of your empty-ass, sub-literate “whoa, dude” audio-visual bullshit .

The best Borat news of the week — banned in Russia. “The film contains material that some viewers may consider offensive to certain nationalities and religions,” Federal Agency for Culture and Cinematography minister Yury Vasyuchkov has explained to local press.
Variety‘s Moscow correspondent Tom Birchenough has reported that the ban “is likely the first time that a non-pornographic movie has been banned [in Russia]…plenty of hard-core porn movies succeed in being licensed by the agency.”
Local distributor Gemini had intended to give Borat “a medium-range release” starting on 11.30. Gemini spokesperson Alexander Kovalenko told Birchenough he was still considering whether to [try and] release the film. The story said that distributors “have the option to appeal the licensing decision √É¬¢√¢‚Äö¬¨√¢‚Ç¨¬ù though it would likely prove a fruitless task [in this instance].”

Condolences to the friends and family of Ed Bradley, the legendary, steady-eyed 60 Minutes correspondent who died, according to Variety, sometime earlier today at age 65. He was felled by lukemia, which he’d been reportedly coping with for some time. The Variety obit says Bradley won 19 Emmys during his career at CBS, which began in 1971 when he joined as a stringer in the Paris bureau…[he] was transferred to Saigon the year after and was wounded covering the war in Cambodia.” It also says that “after the semi-retirement of Mike Wallace in 2005, Bradley became the longest-serving full-time 60 Minutes correspondent (he started in 1980) and was the first to introduce himself after the ticking stopwatch, an honor known as the first ‘I’m.'” A long time ago a friend regaled me with details about a hot affair he’d had with the late Jessica Savitch sometime in the ’70s. For some reason I always saw Bradley as an exceptional news guy after hearing this — a man with a certain spiritual specialness who had the taste buds of a good hound.

I wasn’t invited to Wednesday night’s Westwood screening of Casino Royale (a kind of punishment, I presume, for having dissed Sony’s magnetic fall trio — Marie Antoinette, Stranger Than Fiction, Running With Scissors — with too much vigor) but Variety‘s Todd McCarthy attended, and he obviously sped home and speed-wrote his rave review and had it posted hours later. 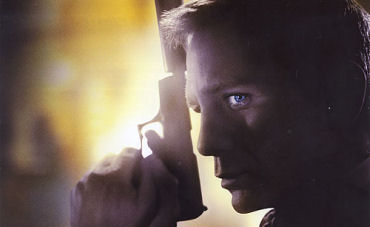 And he’s made two encouraging proclamations — Daniel Craig is the studliest, most Ian Fleming-esque Bond since Sean Connery, and that the film’s low-tech, somewhat underproduced quality is very agreeable thing. For 007 purists, at least.
“Casino Royale is the first Bond in a while that’s not over-produced and is all the better for it [with] the fabled series” having been “invigorated by going back to basics,” McCarthy declares. “It’s comparatively low-tech, with the intense fights mostly conducted up close and personally, the killings accomplished by hand or gun, and without an invisible car in evidence.”
Moreoever, “there can be little argument that Craig comes closer to Ian Fleming’s original conception of this exceptionally long-lived male fantasy figure than anyone since early Connery. Casino Royale sees Bond himself recharged with fresh toughness and arrogance, along with balancing hints of sadism and humanity.
Bond, he writes, “is more of a lone wolf” this time out. “Craig’s upper-body hunkiness and mildly squashed facial features giving him the air of a boxer; 007’s got a frequently remarked upon ego, which can cause him to recklessly overreach and botch things, and the limited witticisms function naturally within the characters’ interchanges.
The notorious gonad-squeezing, scrotum-tugging scene is a stand-out, apparently. “Constrained nude to a bottomed-out chair, Bond is tortured as Mads Mikkelsen‘s Le Chiffre repeatedly launches a hard-tipped rope upon his nemesis’ most sensitive area, and Craig once and for all claims the character as his own by virtue of the supremely cocky defiance with which he taunts Le Chiffre even in vulnerable extremis.”
On top of which the dialogue, says Mccarthy, “requires Bond to acknowledge his mistakes and reflect on the soul-killing nature of his job, [and therefore delivers a] self-searching [that’s] unimaginable in the more fanciful Bond universes inhabited by Pierce Brosnan and Roger Moore.”