For me, at least half of the tingly rumble in Richard Eyre and Patrick Marber‘s Notes on a Scandal (Fox Searchlight, 12.27) is in the Phillip Glass score. Here are two tracks. If you let them in, you’ll most likely be hooked. Think of Fatal Attraction but lesbo-ish and with no rabbits. And much smarter with some well-educated English flavoring.

“People are talking seriously about Little Miss Sunshine getting Oscar attention, and if all the tentpole movies hadn’t crashed and burned the way they did, people wouldn’t even be considering it.” — film critic and author John Anderson, interviewed by Variety‘s Andrew Barker about Oscar hopes, hunches, regrets and dislikes.

Writing about Gabriele Muccino‘s The Pursuit of Happyness, Newsweek‘s David Ansen gives it a thumbs sideways: “I respect the movie’s tact, its honest exploration of homelessness, its surprising refusal to exult in the rags-to-riches aspects of Chris Gardner‘s story,” he says, “but I can’t say I was transported. There’s a repetitious, one-note quality to the storytelling — the bone-density machine Chris sells gets stolen one too many times — that adds to the sense of oppression. I didn’t see the ’20/20′ show about the real Gardner that inspired the movie. But I suspect I would have come away more amazed and moved than I was by this honorable but dogged effort.” Views like these are why this film has a substandard 66% Rotten Tomatoes rating.

“Borat is also suing Fox. He thought he was part of a documentary. He didn’t realize it was a comedy. He signed the release form when he was drunk and he was weak from having sexy time. He wanted to make clear that he would have only been anti-Semitic if he knew it was not going out in America.” — Sacha Baron Cohen, speaking at the British Comedy Awards. (Acknowledgment: the preceding quote and YouTube clip is completely and absolutely owned in eternal cyber perpetuity by David Poland and Movie City News because, you know, the link showed up on MCN a few minutes before the HE version. That means I’ve effectively stolen it from MCN, and that Poland and Movie City News have been unjustly violated by yours truly.)

“Kicking off yet another projected cinematic trilogy laden with dungeons, dragons and digital wizardry, Eragon confirms that novelist Christopher Paolini is no J.R.R. Tolkien — but more to the point, helmer Stefen Fangmeier is no Peter Jackson,” says Variety‘s Justin Chang on the just-opened 20th Century Fox release.
“Appropriating all the external trappings of big-budget fantasy but none of the requisite soul, this leaden epic never soars like the CG-rendered fire-breather at the core of its derivative mythology.” 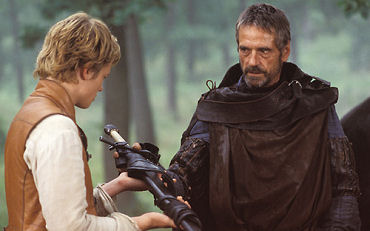 This obviously doomed Rings wannabe, incidentally, has a 15% Rotten Tomatoes rating — one of the all-time lowest in my memory. My favorite review thus far is by southflorida.com’s Chauncey Mabe: “For those who love the fantasy genre known as sword and sorcery — and I count myself in their number — sitting through the movie version of Eragon will suck the will to live right out of you.”

The idea in Guillermo del Toro wanting to direct a Tarzan movie for producer Jerry Weintraub — I can’t think of two smart players who are more fundamentally unalike than these two — is what exactly? To take Tarzan out of the naturalist realm and have him fight monsters? Del Toro can’t make a movie without some kind of monster-demon of the id or supernatural element, and yet the writer is said to be John Collee, whose Master & Commander script was nothing if not tethered to the real worlds of men and the sea. What could be the basis for believing that audiences are about seeing another Tarzan movie anyway? Doesn’t Weintraub realize that John Derek’s 1981 Tarzan, The Ape Man ruled the earth and that any attempt to overcome its impact is futile?

No Comments
Harry vs. four twats

AICN’s Harry Knowles vs. the fiendish mutant vomiting anorexic celebrity quartet — animated. It goes on a wee bit too long, and the animator over-emphasizes Harry’s jug-breasts but otherwise…

N.Y. Times writer Cindy Price on four “other” January film festivals — Slamdance, Santa Barbara, Smogdance (in Pomona) and one in Beloit. “Film festivals have a tradition of being for the elite, but they shouldn’t be,” SBFF director Roger Durling tells Price. “It should be like a candy store. Anyone should be able to walk in and grab whatever they want.”

“‘And I Am Telling You,’ for all the defiance of its lyric and the triumphal swell of its orchestration, is an anthem of impotence, a proud woman’s protest in the face of humiliation and defeat. Like it or not, Effie is going. She has no choice in the matter. But it’s not often you go to the movies and see a big-boned, sexually assertive, self-confident black woman — not played for laughs or impersonated by a male comedian in drag — holding the middle of the screen. And when was the last time you saw a first-time film actress upstage an Oscar winner, a pop diva and a movie star of long standing? Jennifer Hudson is not going anywhere. She has arrived.” — N.Y. Times critic A.O. Scott in his otherwise lukewarm review of Dreamgirls.