Notes on a Scandal (Fox Searchlight, 12.27) is a sort of upscale, British-flavored Fatal Attraction minus the grand guignol… with a strong dose of sad-wicked lesbo suppression driving the engine. Skillfully adapted by playwright Patrick Marber (“Closer”) from a Zoe Heller novel called “What Was She Thinking?,” it’s easily one of the best written, best-acted potboilers of this type that I’ve ever seen — particularly when it comes to Judi Dench and Cate Blanchett‘s performance as a pair of schoolteachers caught up in each other’s obsessions and vulnerabilities in a manner that goes way beyond intense.

Richard Eyre’s direction, Philip Glass‘s pulsating score (a perfect compliment to Dench’s obsessive emotional condition), the sense of restraint in Bill Nighy‘s performance as Blanchett’s much-older husband, and also in 17 year-old Andrew Simpson‘s as Blanchett’s teenaged lover. I worship the precisely-honed dialogue and particularly Dench’s voiceover narration (“she and I share an understanding of the quotidian awfulness of things”). I could easily see it another couple of times, just to savor the fusing of all the elements.
Anyway, I recorded some interview comments spoken by Blanchett, Nighy and Marber the other day, and have posted them in this order….

Comments from Notes on a Scandal costars Cate Blanchett and Bill Nighy plus screenwriter Patrick Marber at the press junket earlier this week. 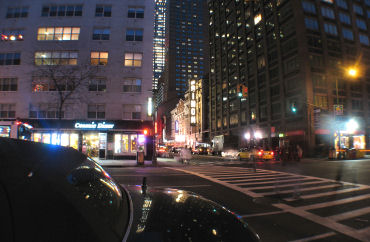 Looking east at 8th Avenue and 52nd Street — 12.21.06, 5:35 pm; slice of Key Lime pie that I barely touched at the end of a lunch today at the Harvard Club; head of bull elephant allegedly shot by Theodore Roosevelt, on wall in Harvard Club; nice to think about but that’s all.
December 21, 2006 4:53 pmby Jeffrey Wells

Which Oscar competitors won and lost over the past 7 days? Helen Mirren and Clint Eastwood fared the best, according to Hollywood Wiretap‘s Pete Hammond, and so did United 93 (despite the stubborn posture of Academy ostriches), Babel (all those Golden Globe and BFCA noms), and Dreamgirls costar Jennifer Hudson (who, let’s face it, basically has the Best Supporting Actress Oscar in the bag).
The losers, says Hammond, are Mirren’s Best Actress competitors, Flags of Our Fathers (because it’s been totally overshadowed by Letters From Iwo Jima), World Trade Center (because “the Dallas/Ft.Worth soothsayers didn√É¬¢√¢‚Äö¬¨√¢‚Äû¬¢t like it”…huh?), Venus star Peter O’Toole (Best Actor contenders Forest Whitaker and Will Smith have stolen all the heat), and the DGA chiefs for flip-flopping on whether or not to send out screeners to org members.

I just searched YouTube unsuccessfully for a tape of last night’s “Charlie Rose” interview with the Three Amigos — Alejandro Gonzalez Innaritu (Babel), Guillermo del Toro (Pan’s Labyrinth) and Alfonso Cuaron (Children of Men). It’ll probably turn up on Rose’s own site sometime tomorrow, but if anyone gets hold of a copy today, please forward.

Fox 411’s Roger Friedman on the documentary that cinematographer Amy Rice has been shooting on the Presidential candidacy of Sen. Barack Obama, with at least some of the funding coming from actor Edward Norton (The Painted Veil).

“As Venus moves casually along, a deep sadness starts to gather around its edges, casting a shadow over the mischievous good humor that is Maurice’s default mood. His mortality portends a larger loss, the eclipse of an approach to life and art that the great British actors of the mid-20th century, from Laurence Olivier to Michael Caine, embodied with such ease and charisma. It is not easy to define that special, paradoxical glamour that Peter O’Toole wears like a well-worn, perfectly tailored jacket — he is a self-made aristocrat, a genuine pretender, a selfless narcissist — but whatever it is, he still has it. Seeing a picture of the young Maurice — the young O’Toole — in a newspaper, someone exclaims, ‘He were gorgeous.’ Indeed he were, and so he is.” — from A.O. Scott‘s N.Y. Times review of Roger Michell’s Venus. 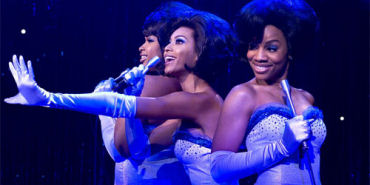 Carr also suspects that maybe, just maybe, L.A. Times staffers are glad- handing Bill Condon‘s widely-liked musical a bit more than necessary with the idea that David Geffen, the film’s somewhat fearsome, Godfather-like producer, may own the Times before too long…maybe.
“The LAT and its Oscar website, The Envelope, has dived deeper into the [Dreamgirls] tank and more often than almost any media outlet,” Carr writes. “The Bagger is no cynic — he actually enjoyed We are Marshall — but he has watched story after story emerge from his esteemed West Coast competitor and wondered if someone, certainly not him, would begin to think thusly:
“Dreamgirls is the long-beloved project of David Geffen, the Los Angeles macher who owned the film rights to the story and who has been rumored to be in talks with the Chandler family about teaming up on a bid for the LAT. No one knows what, if anything, Mr. Geffen is going to do, but if you worked at the paper, might not the possibility that you would soon be calling him boss or He Who Must Be Obeyed have an impact on the amount of attention Dreamgirls gets?”

Sylvester Stallone‘s Rocky Balboa, as everyone knows by now, was the #1 film yesterday with earnings of 6.4 million, or $2300 a print. Don’t expect it to stay on top, though, after Night at the Museum opens on Friday. The latest tracking has Museum at 84, 44 and 13, but that’s without kids factored in — it’s looking like the weekend’s biggest earner to me. The Good Shepherd is at 75, 38, 9 — not awful, fair, middling. And We Are Marshall is looking a bit weaker at 69, 32, 6.
Of the two Xmas day openers, Dreamgirls is the stronger at 82, 33 and 6 compared to 45, 24 and 5 for Black Christmas. The likely audience breakdown for Dreamgirls is very much female (35-plus). The fact that it’s opening Monday in 800 mostly urban and/or black-supported theatres obviously indicates DreamWorks knows where the concentrated interest is (so far). If they had a huge across-the-board hit waiting to happen, they’d be opening in 2000 theatres-plus…but they’re not. Do the math.

Mimi Avins‘ L.A. Times piece about Nancy Meyers‘ meticulously designed, lushly furnished, emotionally cozy film sets — like that little gingerbread cottage in Surrey that The Holiday‘s Kate Winslet lives in — overlooks a fairly basic fact, which is this: the instant that any half- aware moviegoer sees one of these sets in one of Meyers’ films, the natural response is, “This is a House and Garden, middle-aged-female-with-money- to-burn bullshit interior-design fantasy.” They make the same point in one Meyers film after another, which is that Meyers prefers her own affluent heroin-habit dream world to any semblance of reality — as most of us (including people with money) know it.

Bad trailers are a dime a dozen. The question is, why isn’t the groundbreaking Little Children trailer on I-Film’s list of the year’s best?