Leaving Salt Lake City this morning for Los Angeles, then driving right up to Santa Barbara for Roger Durling‘s hot-shit film festival, which kicks off tonight with a screening of Factory Girl. No more posts until day’s end, at best.

After much waiting, the Los Angeles memorial gathering for the late Robert Altman has been scheduled. It will happen on Sunday, 3.4.07, at the main Directors Guild theatre, at 2 pm. The New York version will happen about two weeks earlier, on Tuesday, 2.20.07. 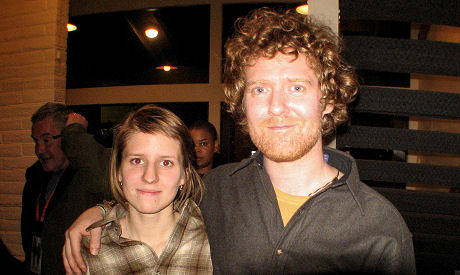 “And then the Best Picture category was announced: Babel, The Departed, Little Miss Sunshine, he Queen and Letters From Iwo Jima. Wait…are they nominating six [films] this year? The hundreds of reporters in the [Academy] auditorium were leaning heads together, making sure that they did not hear the name Dreamgirls.
They did not.” — from David Carr‘s Oscar nomination piece in the N.Y. Times.

“David Geffen‘s Dreamgirls was snubbed because Hollywood is jealous of him. So what that the Motown musical led with eight Oscar nominations (three of them for Best Song)? That tally may be a promotional wet dream, but trust me, DreamWorks and Paramount, who’ve been pimping this pic since those disgusting $25 movie tickets during the first 10 days of its theatrical run, are having dry-hump nightmares.
“Shut out for Best Picture. Shut out for Best Director. Shut out for Best Actor/Actress. Among the big nominations, it made do with only Best Supporting Actor and Actress. There was too much hype and it came too early for this musical to survive even the shortened awards season without the inevitable backlash. So it was bitch-slapped by the Academy’s nominating formula, which gives the advantage to films with a small but passionate following vs. films with broad lukewarm support.
“Clearly, those spiteful Academy members are sending the message to Geffen that no matter how rich and powerful he is, they will deny him what he most desires: to exit the movie industry accompanied by Oscar. Individually, none of the Oscar voters would dare take on David. But there’s safety in numbers, so they figure, what the hell.” — from Nikki Finke‘s Oscar nom anlaysis piece, “Ther Scars of Oscars.”