I went to the opening-night Factory Girl party for the Santa Barbara Film Festival last night, but I couldn’t get into the groove today. I blew off the Sacha Baron Cohen discussion at the Lobero early this afternoon, and then I couldn’t bring myself to attend the Helen Mirren tribute this evening at the Arlington. I don’t know why, but maybe I’m just feeling Cohen-ed and Mirren-ed out. (A lot of us are, no?) I promise to do better tomorrow. Apologies to Roger Durling and the gang — just an “off” day. (Or something.)

A dull photo because I was too lazy to snap a better one.
January 26, 2007 9:53 pmby Jeffrey Wells
15 Comments
Sundance paradox

There is something profoundly wrong with the mentality behind the Sundance aquisition frenzy. No, not Paramount Vantage paying $7 million for Son of Rambow (i.e., Billy Elliott if directed by Tim Burton). Not Adrienne Shelly‘s Waitress selling to Fox Searchlight for $4 million, despite it being a somewhat hammy, too-obvious thing. And not Harvey Weinstein buying Grace is Gone, a steady, honest film about loss and denial that may find fans among the rural reds. All of these are solid deals that make sense.
What’s mind-blowing is the fact is that none of them deliver as much of an exquisite, true-hearted high as John Carney‘s Once, and this little Irish film isn’t even getting mentioned as a curious non-seller in articles about Sundance pickup action. Forget bottom-line distribution execs — even journalists are ignoring it. The problem, as everyone knows, is that it’s seen as a marketing challenge. Maybe, but it works when you sit down and watch it.
There’s one particular acquisition — First Look’s payment of $3 million for a piece of shit called The King of California, which is basically about a bearded Michael Douglas acting wiggy and eccentric and Fisher King-y — is driving me up the wall. Mike Cahill‘s movie is a wash, a throwaway…but it sold because distribs believe they can sell Douglas and Evan Rachel Wood in the leads. Once, trust me, is several times more likable and engaging, and yet distributors are reportedly steer- ing clear. As Jack Nicholson‘s gangster says in The Departed, “That’s called a paradox.”
Here’s one way to sell Once…..ready? Sell it as the best date movie since The Notebook. No, since Titanic. Use the old Don Juan DeMarco line — “If you can’t get laid after taking her to see Once, you can’t get laid.”
Here, if you’re interested, is the film’s signature song — Glen Hansard‘s “Slowly Falling”.

An Envelope podcast chat (recorded Thursday afternoon) between myself and Tom O’Neil about Sundance ’07 — Once, Black Snake Moan, Grace is Gone, The Savages, etc. Plus L.A. Times critic Kenneth Turan talking about same — Once, Grace Is Gone — plus Hounddog, Away From Her, In The Shadow of the Moon, et. al.

This TMZ video of Nicole Kidman‘s auto crash on the set of The Invasion, which appeared on the Drudge Report yesterday morning, shows Kidman grimacing for a very brief second, but then walking away from the banged up vehicle a few seconds later in a relaxed, we-be-cool way. I like that quality in a woman. This was a definite image-enhancer. (Apologies for putting in the wrong link yesterday — “Leo jeered by Spanish press” — which, by the way, is pretty funny, the apparent lesson being that it’s rude to keep press people waiting.)

Today is Paul Newman‘s 82nd birthday, which reminds me that a respected big-name critic is hard at work on an ambitious Newman biography (he’s been operating under-the-radar for the last several months). Let’s hope everything’s jake when the book finally comes out, which may be next year. Meanwhile, Turner Classic Movies is airing a kline-up of Newman films this week — Cat on a Hot Tin Roof, Hud, The Hustler, The Rack and The Prize. The latter two aren’t available on DVD. 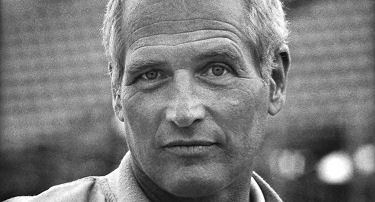 This is bad, very bad, for the image of George Clooney. Good Night and Good Luck, Darfur and Pamela Anderson don’t mix. I’m hoping it’s not true; in fact, I’m going into arbitrary denial right now and presuming it isn’t. One should always either fuck “up” or fuck laterally, but never, ever beneath your station.