“My expectations are low. It would be silly for me if I haven’t learned from my experience [of losing]. But it’s fun, dear. It really is fun. I would be delighted to win. If not, I will be the record holder for the one who never won one.” — Peter O’Toole speaking to L.A. Times profiler Susan King.

David Fincher‘s Zodiac (Paramount, 3.2) is a knockout. I felt pleasantly drugged (like I’d taken an art-film quaalude) after seeing it. It’s my idea of entertaining and then some — it’s absorbing, sharp, edge-of- the-seat stuff — although it’s not really “entertainment.” Not in a hoi polloi, whoo-whoo, pass-the-popcorn sense. Which is why certain voices on the Paramount publicity team have been skittish about showing it. 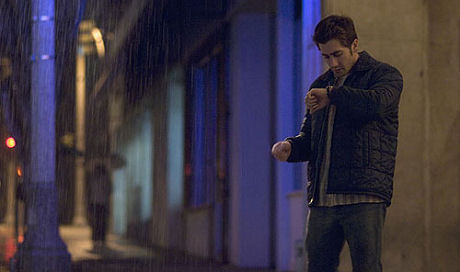 I guess they’re afraid that Zodiac‘s unusualness (particularly its lack of a conven- tional catch-the-killer finale) may result in iffy buzz or a not-big-enough haul on its first weekend in theatres, which is only three weeks away. The nervous nellies may be right (or half-right), but anyone who doesn’t see Zodiac is going miss one of the most oddly arresting and excitingly different cop thrillers of all time.

What it is, most definitely, is a commercial art film of the highest order — an existential police procedural about one of the most notorious “cold” investigations in U.S. history. It’s especially haunting for me because it doesn’t have a finale that conventionally “pays off.” It’s a movie about the unsolvability of some things — about how some riddle or intrigue will sometimes excite you and then turn around and mess with you big-time, and then finally deny a sense of closure. I don’t exactly know why I think it’s a better film because of this. I just know that a film as assured, well honed and tightly packed as this one deserves to be seen at least two if not three times.

Zodiac is based on two best-sellers by Robert Graysmith, “Zodiac” and “Zodiac Unmasked: The Identity of America’s Most Elusive Serial Killer Revealed,” which are first-hand accounts about the hunt for the Zodiac killer who terrified the San Francisco area in 1968 and ’69.

The chief Zodiac hunters in the film (as they were in actual life) are Graysmith (Jake Gyllenhaal), a San Francisco Chronicle cartoonist at the time (and later a novelist), a blunt-spoken, never-say-die San Francisco detective named Dave Toschi (Mark Ruffalo), his low-ley but super-focused partner William Armstrong (Anthony Edwards) and a Chronicle reporter named Paul Avery (Robert Downey, Jr.) 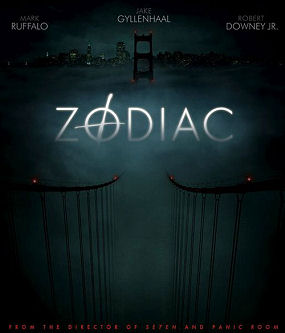 (Toschi is understood to have been the real-life model that Steve McQueen based his tough-nut San Francisco detective on in the 1968 Peter Yates film Bullitt. And of course, the Zodiac killer was the model for Andy Robinson‘s psycho killer in Dirty Harry , the 1971 Don Siegel-Clint Eastwood classic…right down to the Zodiac claim about wanting to kill a busload of school children.)

Zodiac is partly about the thrill and fascination of the hunt (the scores of hints and clues that pile up are more and more fascinating as the story moves along), and partly about how the complex, seemingly never-ending nature of the case makes Graysmith, Toschi, Armstrong and Avery go a bit nuts.

Is there such a thing as being too determined to stop evil? At what point do you ease up and say, “I’ve done all I can.” Is it always essential to finish what you’ve started? Should never-say-die always be the motto, even at great personal cost?

Unshowy, exquisitely measured and assembled like a perfect watch, Zodiac is about how the difficulty of cracking a complex case never has the slightest inhibiting effect on the investigators. They just keep at it until the damn thing turns around and starts to eat them, and still they don’t stop. The victims, in other words, aren’t just the ones who get shot or stabbed or otherwise killed. 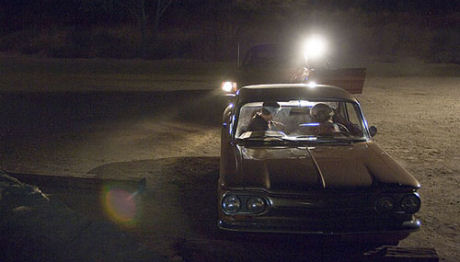 Zodiac isn’t just about sleuthing. Deep down I think it’s a metaphor piece about obsessions wherever you find them, and how the never-quit theme applies to heavily-driven creative types (novelists, painters, architects, musicians) as much as cops or cartoonists or stamp collectors or baseball-card traders.

Zodiac and Se7en have at least a couple of things in common: both are heavily focused on the bottled-up emotions and personal frustrations of their two main protagonists, and both films end on a note in which the “crime doesn’t pay” motto doesn’t exactly ring out from the belltower.

It’s the most masterly film of Fincher’s career. He doesn’t seem to be pushing or selling or manipulating anything here — he’s just got a good grip on the material, and is letting it play itself out according to its own rhyme.

All I know is that I couldn’t get enough of it — it ticks like a metronome and sucks you in without really delivering anything stand-out spectacular in the way of mind-blowing finales, pull-out-the-stops performances (which isn’t to take anything away from the actors, who are damn near perfect) or shocking plot turns. It scores primarily by just being a great piece of filmmaking. 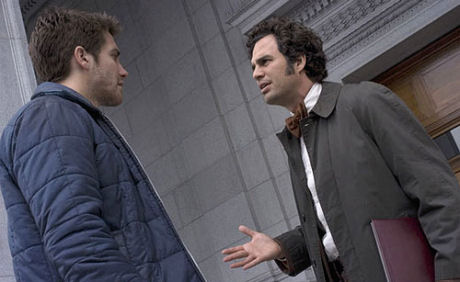 Paramount’s decision to not release Zodiac at the end of ’06 was, due respect, not swift. It’s not an Academy-type film, but it easily would have landed on several ten-best lists, which could obviously have helped with the ad campaign. A critic friend is calling Zodiac‘s 3.2.07 release “the most ridiculous [call] for a major Hollywood film that I’ve ever observed — certainly in our era where, in general, the first four or so months of the year are a dumping ground for crap.”

This guy wrote me this morning and called Zodiac “a high masterpiece.” I wrote back and said, “I agree with you 120 %…it’s brilliant…a masterpiece of sorts. Doomed to fail with the gorillas, but still….”

The guy wrote back and said that Zodiac is “a complete work of art — easily one of the most impressive procedural movies ever made in this country. What I think you’ll find is that as the film observes — not so much the killer — as those piecing together the pieces and clues, and nearly losing their lives and minds in the process…well, the film itself is a product of the same obsession as the characters, resulting in a remarkably rare example of story, subject, theme and filmmaking becoming an organic whole.

“I think that’s the key to the film’s extraordinary intelligence, and why Fincher jettisons nearly every stylistic device and post-modern inclination he’s previously loved (I’m thinking especially of Fight Club, of course, but also Se7en, which this film will be endlessly compared and contrasted to…) 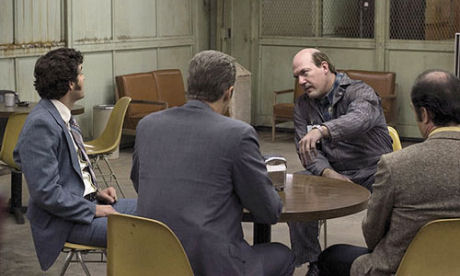 “[People will] notice how thoroughly the film feels and walks and breaths like a 70s work — far more than just a re-creation of the ’70s, or a loving re-capturing of the ’70s, but completely grounded in the ’70s, from the flattened-out institutional lighting seen in Lumet’s films (which this most recalls, like Prince of the City), the long chapter-endiing fade-outs, David Shire‘s magnificent score that brings his Conversation music back to life (what a touch that is!) and the film’s balance of movie-star scenes and social reality. All of it without a shred of affectation or clever cultural quotation.

“I really can’t heap enough praise on this thing, and I’ll tell ya….Paramount was out of its freaking mind to hold this over to 2007. Maybe the whole DreamWorks business was clouding people’s judgment, but my god!! Zodiac would have certainly been a major contender in critics awards. It’s just beyond me that Paramount is now effectively dumping this into early March, after once considering January(!!!) …Utterly astounding.

“Perhaps, but possibly this absurd early March opening might have the result of ensuring that the film actually does better at the b.o. since absolutely nothing else in its class is opening. Mass audience, no way. But wow, this movie just keeps working in your mind. It’s made with such care, attention, perception, detail and sense of what comprises great moviemaking.

He said he loved that Fincher “is no longer displaying the need to be noticed that I detected in his earlier work. He approached this not only with total confidence, as someone who knows the story up one side and down the other, but also as a Californian. It contains such a rock-ribbed sense of what it was to be a Californian during that period, and a Bay Area resident. 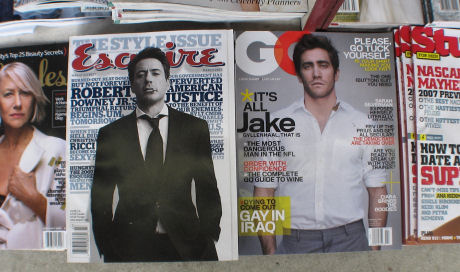 “The San Francisco presented here runs so counter to the city of cultural cliche, here one dominated by white guys — was there a black face on screen? No counter-culturalists, no hippies, no freaks — unless you want to count Downey’s Paul, but he was still an ink-stained wretch only with a hip style sense and an upscale taste in drugs. In this way, again, it reminded me so much of The Conversation, but also Alan Pakula‘s 70s films. In a way, the SFPD stuff was based in Lumet-land, while the Chronicle stuff was based in Pakula-land, while never feeling like the movie was ripping off or stealing from these or other directors. I could go on….”

One small beef: Graysmith is a very strongly written guy with a lot of struggle and frustration inside — the pressure on him just builds and builds. But in a script I read last year, Graysmith had a great “release” scene at the end when he delivers a spellbinding 12-page oratory that ties up all the loose ends about who and what Zodiac is and was. (I was reminded of Simon Oakland‘s this-is-what-actually- happened speech at the end of Psycho.)

This scene acted as a kind of climax, but Fincher hasn’t used it. The finale — the film itself — would have been stronger if he had.

An exceptionally hip NASDAQ.com columnist named Frank Barnako has taken notice of Stephen Rodrick‘s Los Angeles magazine piece about Oscar bloggers…whoop-dee-doo. The article “says that some of the most influential Oscar-related journalism, if you can call it that, is coming from bloggers”…old-media asshole.

Half Nelson star Ryan Gosling doesn’t have a snowball’s chance in hell of winning the Best Actor Oscar — he’s probably the fifth-place choice of most voters — so why not go location-scouting in Uganda for The Lord’s Resistance Army, which Gosling with direct, produce, co-write and star in? Our time on the planet is limited, after all. 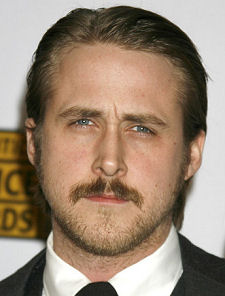 I’m still wondering, though, how and why Gosling suddenly grew into the Brian Dennehy of his generation. I would analogize his body-weight gain over the last two years to the contrast between Marlon Brando‘s physique in A Streetcar Named Desire in ‘651 and Bedtime Story in ’64.

It broke early this morning that News Corp. honcho Rupert Murdoch screwed up yesterday by giving reporters bogus information about Sacha Baron Cohen signing to make a Borat sequel for 20th Century Fox. Not yet he hasn’t. Studio spokesperson Chris Petrikin said, “We’re eager to work with Sacha again, and we’ve had casual discussions about a sequel, which we’d love to do, but at this point, it remains too preliminary to discuss.”

I finally saw David Fincher‘s masterful Zodiac (Paramount, 3.2) last night — a lengthier reaction to follow in an hour or two — but I didn’t run home and post something immediately because I wanted to let it settle in. To see if it would gain. And it has. No posts this morning either because of…how to put this?…nourishing private stuff. It goes without saying, of course, that an 18 hour-per-day hardballer indulges in n.p.s. to a certain degree of professional peril. “Feed me…feeeeeed me,” Hollywood Elsewhere whispers 24-7. Bike-riding on the beach? Maybe, possibly….as long as you post three or four items/stories first. No, five. Wait…one more.