Support on Patreon Follow @wellshwood
25 Comments
A “Once” sequel?

There’s reason to half-believe that Once (Fox Searchlight, 5.18), a curiously intoxicating date movie, might catch on. A suggested copy line — “If you can’t get laid after seeing Once with someone you’re after, you can’t get laid” — is one reason. Whatever the odds of this happening (a decent box-office haul, that is), it seems that director John Carney is planning on some kind of spirited reception. 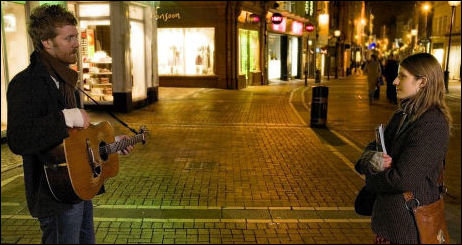 Glen Hansard, Marketa Irglova in Once

A friend who spoke with him in L.A. after a recent press screening says he intends to shoot a sequel about the continuing romantic travails of Glen Hansard and Marketa Irglova‘s characters. Call it a kind of nod to Richard Linklater‘s decision to shoot Before Sunset as a completion of Before Sunrise. 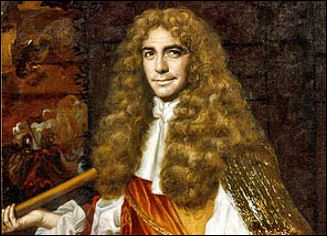 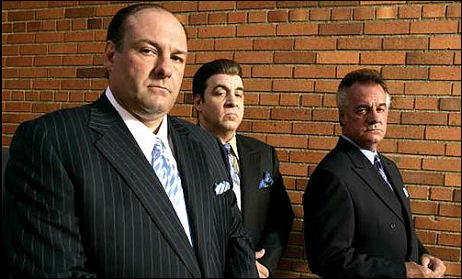 Will Ferrell as an astronaut, a bullfighter, a ballerina and a referee. Four new-movie ideas proposed by Arizona Daily Star smartass Phil Villarreal that would broaden Ferrell’s following and build upon his tremendous talent.

“After Hollow Man, I felt that I should change gears, because I felt that it wasn’t a personal movie anymore. I felt like I could not express myself in a personal way and said that I have to back off from the fantasy and the science fiction or the studios or whatever. I have to do something that’s for me; I want to do something which I believe in again.” — Black Book director Paul Verhoeven speaking to Coming Soon‘s Edward Douglas. 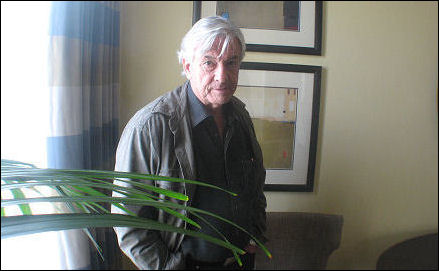 A letter about comedians going serious (Sandler, Murphy, Rock, Ferrell) by L.A. Times reader named Nicholas Silver was published in today’s edition. I don’t agree with everything he says (particularly a remark about Adam Sandler seeming shallow in Reign Over Me), but he says it fairly well:

“You want to know what we really learn when comics like Adam Sandler and Chris Rock make so-called serious movies? We learn how very shallow they are and, by extension, how very debased we are as Americans for paying so much attention to them.

“Listen, anybody in a moment of quietude can seem to be thinking. Take Eddie Murphy: apparently he was great in Dreamgirls, but talent and charm have never been an issue with him. The question is, where’s his head at? I’ll tell you where: Norbit.

“Will Ferrell is funny and sweet, but he’s stuck in television. Every idea he gets is based on perceptions gleaned from watching TV. Nearly all American comedians post-Saturday Night Live have been siophomoric, developmentally stunted and crude. The bar has definitely been lowered.

I’ve recently read Peter Buchman‘s scripts of The Argentine and Guerilla (both dated 10.4.06), the two-part Che Guevara saga that Steven Soderbergh will begin filming sometime in May with Benicio del Toro in the title role, and they’re awfully damn good — a pair of lean, gritty, you-are-there battle sagas, one about success and the other about failure. Together they comprise a strong and properly ambiguous whole. 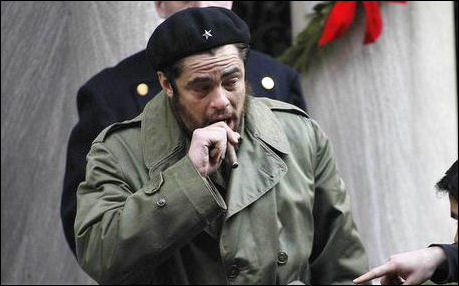 Obviously political and terse and rugged, the two scripts are about how living outside the law and fighting a violent revolution feels and smells and chafes on a verite, chapter-by-chapter basis. They’re about sweat and guns and hunger and toughing it out…friendships, betrayals, exhaustion, shoot-outs and trudging through the jungle with a bad case of asthma. What it was, how it happened…the straight dope and no overt “drama.”

If Soderbergh does right by what’s on the page, The Argentine and Guerilla (which Focus Features will open within weeks of each other in 2008) will have, at the very least, a Traffic-like impact. The films will almost certainly be Oscar contenders, and you have to figure that del Toro, playing a complex, conflicted hero who ends up dead (i.e. executed in a rural schoolhouse by a drunken Bolivian soldier), will be up for Best Actor. The Guevara role is too well written (nothing but choice, down- to-it dialogue from start to finish) and del Toro is too talented an actor — it can’t not happen.

In fact, I can easily imagine critics comparing Soderbergh’s two-part saga to Coppola’s The Godfather and The Godfather, Part II — not necessarily in terms of quality or emotional-impact issues but because they convey two distinct and disparate sides of Guevara’s saga, the up and the down, in the same way that Coppola’s films are about the youthful ascent and increasingly malignant, middle- aged descent of Al Pacino‘s Michael Corleone. 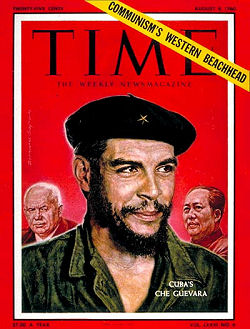 The Argentine is about Fidel Castro and Guevara’s forces leading their ragtag anti-Batista army from their arrival on Cuban shores in 1956 until their victory in late ’58. Guerilla is about Guevara’s failed attempt to spark a revolution in Bolivia in 1967. The former is about struggle, strength and triumph, and Guerilla is its opposite number — the same fight minus the wind in the sails.

Reading them took me back to a 3.19.07 “Page Six” item that preemptively attacked the Soderbergh venture, which I read as a case of knee-jerk hostility due to the fact that the N.Y. Post, which publishes the column, is a right-wing paper that sometimes lets its agenda seep into the writing.

The item vented concerns shared by right-wing anti-Castro Cubans (i.e., the Andy Garcia brigade) that the two films will portray the famed revolutionary in glowing heroic terms without focusing on his brutal, darkly dogmatic side that manifested when Guevara was put in charge of Havana’s La Cabana fortress and oversaw the trial and execution of 600 political prisoners.

“To witness such butchery is a trauma that will accompany me to my grave,” Jose Vilasuso, a lawyer who worked under Guevara, is quoted as saying. “The walls of that medieval castle received the echoes of the rhythmic footstep of the squad, the clicking of the rifles, the sorry howling of the dying, the macabre silence.”

In this respect the Cuban righties are not that wrong. The Argentine contains no La Cabana depictions — nothing about what happened in the wake of Castro and Guevara”s triumph, and no reflections at all about the kind of country Cuba became under Castro since then. Guerilla alludes to Guevara’s frustration with being a top-level Cuban comandante, but no specifics are offered. (Oddly, the script doesn’t have any scenes of Guevara visiting New York City in December 1964, which Soderbergh filmed last year.)

And Guevara is clearly portrayed in a flattering light. As far as these screenplays represent what the films will ultimately be (the rule-of-thumb being that scripts are only blueprints), Buchman’s Guevara is an imperfect but admirable fellow — com- plex and dogged, tenacious but plagued by asthma, brave and strong but capable of error, rigid and dogmatic and, in Guerilla, oblivious to the basic shape of things, and yet basically decent and humane and certainly courageous to the last. 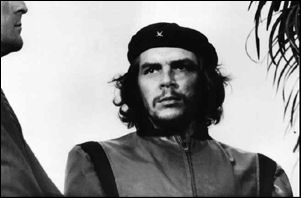 And yet the scripts don’t feel like a buff-and-polish job. (Not to me anyway.) Guevara is shown as a right guy, but they don’t attempt to portray a revolution or the Cuban culture or anything sweeping about the wisdom or ultimate goodness of Latin American socialism. They’re about an intelligent, willful, resourceful hombre and his allies slugging it out in a pair of tough battles. No heartfelt speeches, no playing to the galleries — just the rough-and-tumble.

The producer is Laura Bickford, who began working on the project with Del Toro and Soderbergh five or six (seven?) years ago, in the wake of their joint Traffic collaboration. The lead financier is the Paris-based Wild Bunch, which “also hung in through twists and turns that included Terrence Malick committing to direct and then dropping out to make The New World.” 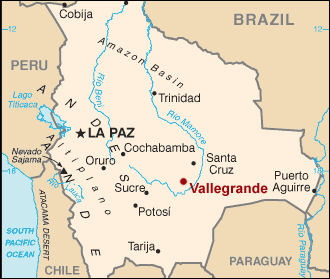 Responding to criticism about the Tribeca Film Festival jacking ticket prices from $12 to $18, spokesperson Tammie Rosen has told N.Y. Post reporter Sara Stewart that “in an effort to provide the best possible experience, we have raised our prices, which have until now been lower than most other festivals.”

To which N.Y. Post critic and blogger Lou Lumenick responds: “While it’s true that the Toronto Film Festival gets $15 a ticket, it’s also true that their offerings are substantially better than those in Tribeca. Those of us who have covered the festival over the years have largely turned a blind eye to the issue that the bulk of the offerings are mediocre or worse — largely films that were rejected by Sundance or New Directors/New Films, many of which are never heard from again.

“The steep ticket prices may force the media to abandon our previous civic boosterism and start looking at Tribeca’s offerings from a more consumerist point of view — are these flicks really worth $18? And I doubt that’s what co-founders Robert De Niro and Jane Rosenthal wanted.” 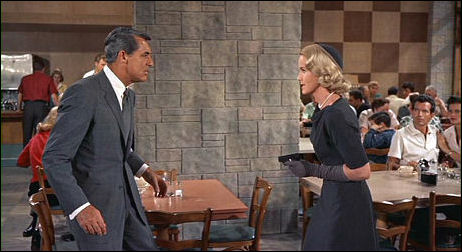 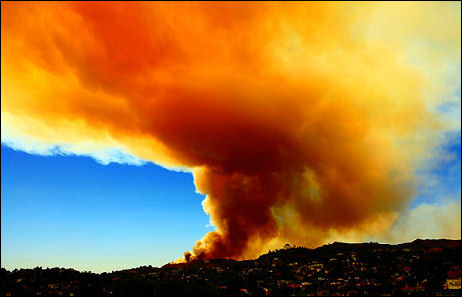