Three dishonest nude scenes — #1, #2 and #3 — featuring a weeping and pleading Natalie Portman being tortured in Milos Forman‘s Goya’s Ghost. which opened last November in parts of Europe but won’t be seen in the U.S. until July. The scenes are well-shot and chillingly acted (Javier Bardem is especially creepy), but dishonest because of the timid angles, the chickenshit editing and the reported use of a body double.

With his latest column, a piece that praises the primal visual energy of 300 and disdains the fuddy-duddy critics who are too caught up in the aesthetics of 1970s-era quality to understand the genius of young guys like Zack Snyder and his digital Hollywood brethren, L.A. Times columnist Patrick Goldstein has made me realize something…something that old-school, late-GenX and boomer-aged editors probably need to consider also. Seriously. 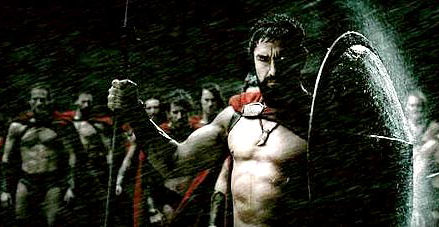 In order to hold on to the dwindling readership of Genx and GenY-aged movie nuts who are also video-game and graphic-novel fans (some scholastically-challenged, some not) and to save the established venerated film critics from seeming overly clueless and/or snooty, big-city newspaper editors need to hire pinch-hitting geek film critics to come in and write counterpoint reviews whenever any kind of all-digital, intellectually minimalist film based on a comic book is released.

Boomer-and late-GenX-aged film critics have, as Goldstein writes, “been trained to value realism over fantasy” and are therefore psychologically and physiologic- ally incapable of giving crap-milkshake movies like 300 any kind of fair hearing.

To give narrative simple-dick, whoa-dude, all-digital movies a fair shake, editors need to bring in critics who aren’t so hung up on erudition and literary traditions and plays and other 20th Century art forms, and who are able to approach films like the serious fans who bought $70 million worth of 300 tickets the weekend before last are…guys who can look at a heaving sea of all-digital images and go “wow” with absolute sincerity…guys who realize, as Goldstein writes, “that Hollywood’s mass-audience films are not a literary or an intellectual genre…never have been, never will be…they are built around visuals and emotion.”

The problem with boomer-aged critics (the pathetic saps) is that they’re hung up on the mostly discredited idea that visuals and emotion alone aren’t enough. Most of them feel that some kind of ruthlessness or fierce personal vision or comprehen- sive intensity — some kind of audacity or brashness, or a spiritual belief system that’s about something besides the fact that the bad guys are really bad and that the good guys are pure of heart and noble of spirit — is also necessary. I know that the older guys can’t seem to get with the program, and I don’t know what to do about it. Maybe they need to be taken out behind the barn and shot?

Other fields of criticism require different writers for different experiences. Sometime between the late 1960s and early ’70s it dawned upon editors that critics who were used to the worlds of opera and theatre and world-class orchestral concerts weren’t the right guys to review the latest Rolling Stones album or to trek down to CBGB’s and listen to some new band. You have to get writers who are part of what’s going on in order to write well about what’s going on. 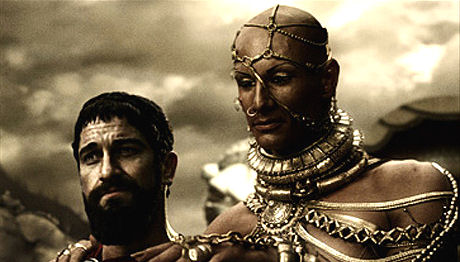 Seriously — I don’t think for a second that mainstream over-40 critics were being the least bit clueless or crabby when it came to zotzing 300. They’re merely applying minimal standards of art, taste (which always comes, in the words of Francois Truffaut, “from a thousand distastes”) and narrative refinement to an aesthetically downgraded digi-world, however archiac and analog such judgements might seem to guys like Goldstein.

(I refuse to believe that Goldstein, a very sharp guy, is really and truly embracing the Snyders of the world. I think he’s equating big earnings with cultural-political significance on some level and is looking to somehow jump on the bandwagon. I know that he knows better. That or he enjoys pissing people off.)

Movies are great — they’re my life, my love, my religion — but let’s face the bitter facts. More and more movies like 300 are going to get made in the coming years (a lot of them), and more and more guys like Zack Snyder (and their allies) are going to take positions of power in this town. Slowly, steadily, movie culture as many of us have known it is being usurped and weakened, and is sliding into the swamp. The world is devolving. Movies may have peaked with Mark Lester‘s Truck Stop Women, or maybe, just maybe, the best is yet to come…but I doubt it.

Larry “Bud” Mehlman, the “Late Night with Letterman” guy with the black J.C. Penney suit and the dark-framed glasses and the mincing, high-pitched voice who always spoke like he was closely related to Robby the Robot, has left the planet. He was 85 years old. His real name was Calvert DeForest. The Larry “Bud” Mellman irony is that he may or may not have been ironically hip. He was a guy who looked and sounded like a clueless middle-class droid but seemed on a certain level to be mocking himself, or at least mocking the stooge that he seemed to be “playing”. But he may not have been. He may have really been that dorky guy in actuality. 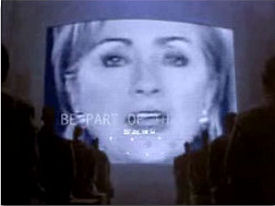 A congressman’s mistress is killed, and a team of investigative reporters secretly work with a police detective to solve the murder. The movie will be called State of Play, an American version of an acclaimed British miniseries that you can buy on DVD. The new version, which will star Brad Pitt and directed by Kevin McDonald from a script by Matthew Michael Carnahan, will start shooting in November. The plot isn’t what anyone would call strongly similar to Clint Eastwood‘s Absolute Power (’97), but it’s the same line of country — I need to watch the British miniseries. 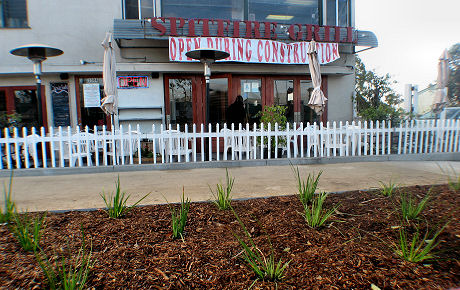 The original Alamo Drafthouse on Colorado Street in downtown Austin is closing down. Another native operation done in by some greedy-ass landlord reacting to the proverbial corporate chain stores pushing up urban rents and making all downtown areas (including those in Prague, Moscow and Beijing) look exactly the same. The upside is that there’s a bounceback coming. The downtown Drafthouse will be reborn at the historic Ritz Theater off of Sixth Street.