TMZ is reporting that the Miami New Times is reporting that Lily Tomlin has joked about that YouTube video showing her in a profane spat with director David O. Russell on the set of I Heart Huckabees. Except she didn’t joke — she sounds chagrined to me. “I’ve never seen it,” she said to an interviewer. “Is that when I’m sitting in the seat and really going nuts? Oh my God, I’m gonna die when I see that.”

I thought this was generally known, but perhaps not: that end-of-March release date for Werner Herzog‘s Rescue Dawn is no more. MGM “still does not have all delivery items from producer Steve Marlton,” says a guy in the thick of it, and there is “still some remaining legal mess has not been sorted out yet by the production.”

The thinking is to maybe release the film by the end of May in L.A. and N.Y. and try to keep it alive until the fall, or so I’ve been told. It’s all a little bit up in the air.

In any event, Herzog fans will certainly want to go to the Aero Theater in Santa Monica this coming weekend as Herzog will be giving talks between screenings of Fitzcaraldo and Aguirre, the Wrath of God on Saturday night and Lessons of Darkness and Grizzly Man on Sunday night.

Herzog is currently finishing a film he shot in Antarctica at the end of last year, and is expecting to screen a first version roughly two months from now.

An assessment of the heightened interest in advertising on cellphones, as summarized by N.Y. Times reporter Eric Pfanner. Mobile phones are conventionally referred to as “the third screen, behind television and the computer,” Pfanner writes. And yet Bob Greenberg, chief executive of R/GA, an agency based in New York that specializes in digital advertising, says he actually thinks about a cell phone screen “as the first one…it’s with me all the time.”

Francis Coppola scared some of us half to death when he said a few weeks ago that the themes in his latest film, Youth Without Youth, are about “time, consciousness and the dream-like basis of reality,” and that “for me it is indeed a return to the ambitions I had for my work in cinema as a student.” The reality is not so terrifying, apparently, given that Sony Pictures Classics has acquired North American distrib rights for Coppola√É¬¢√¢‚Äö¬¨√¢‚Äû¬¢s film — his first in ten years.

The press release doesn’t say when SPC will release Youth Without Youth, but I would figure sometime between late September and mid November. If it doesn’t go to Cannes it’ll certainly go to Toronto.

Coppola wrote, directed, and produced Youth Without Youth, adapting the screenplay from a novella by Romanian author Mircea Eliade.

In response to the whole appearances issue regarding the Andres Martinez-Kelly Mullen relationship being a seminal factor in producer Brian Grazer being invited to guest-edit the L.A. Times “Current” section, publisher David Hiller has scrapped this coming Sunday’s edition and Martinez, seething and indignant, has resigned. (Click to play song while reading the rest.) “Hiller’s decision to kill the Brian Grazer section this Sunday makes my continued tenure as Los Angeles Times editorial page editor untenable,” he blogged this morning. “The person in this job needs to have an unimpeachable integrity, and Hiller’s decision amounts to a vote of no confidence in my continued leadership.”

I’ve been waiting to read some definitive article in a mainstream publication that repeats what I’m hearing from the guys at West L.A.’s Laser Blazer, and which has been reported on various industry and gamer sites, which is that Blu-ray has surged ahead of HD-DVD and that the aroma of absolute victory is in the air, like the scent of burning leaves on a late-fall afternoon.

Has there been a clear-cut game-is-over, Blu-ray-has-won story in any major publication (Variety, N.Y. Times, Wired, Wall Street Journal, Washington Post) over the last couple of months that I’ve missed? New York Post critic Lou Lumenick has passed along a 3.8.07 story (exactly two weeks ago) that addresses this trend

The thing that did it, apparently, was the selling of two-in-one Blu Ray and Playstation 3 players starting sometime in the middle of last year. As an ign.com story observed last April, “Sony is using the PlayStation 3 to act as something of a Trojan Horse to get players into people’s homes.”

“Spurred in part by the sale of 2 million PlayStation 3 consoles, Sony officials have claimed that, according to research data, cumulative sales of Blu-ray discs have surpassed those for HD-DVD for the first time,” according to a 2.6.07 posting on Gamasutra.com.

“According to Nielsen VideoScan, the consumer research firm for the VHS and DVD sell-through industry, in addition to an overall lead in sales to date, Blu-ray movies outsold those released for the HD-DVD format by more than a 2-to-1 margin during the first week of January. This equates to 47.14 HD DVD titles sold for every 100 Blu-ray titles.

“The report also found that Blu-ray titles outsold HD-DVD releases by nearly a 3-to-1 margin during January’s second week, with 38.36 HD-DVD titles sold for every 100 Blu-ray releases.

“Sony officials also revealed that, according to an online survey of approximately 100,000 current PlayStation 3 owners conducted by the company, 90 percent have watched a Blu-ray movie on their console.

“This high percentage is likely helped by the bundled Talladega Nights Blu-ray disc with the first 500,000 units of PlayStation 3. But even apart from that, 80 percent of those surveyed plan to purchase further Blu-ray movies, while 72 percent of respondents stated that they plan to rent a Blu-ray movie in the near future.”

42 Comments
“Sopranos” coming to an end

Talk about teary farewells — the final Sopranos season (an abridged one composed of ten episodes) kicks off April 8 and ends on June 10, and after that’s over it’ll be all over. Nothing lasts forever and the pages need to keep turning, and there will always be those DVD box sets (which I’d love to see some day in Blu Ray) but it feels sad — there’s no escaping that. I know that producer David Chase will never make, say, a three-hour Sopranos feature, but if he were to announce one I’d be delighted. 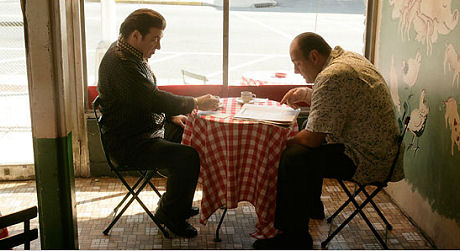 I’m hoping at the very least that Tony doesn’t get whacked. I’ll have a very hard time with that if this happens. Many of us would, I suspect,

Tens of thousands have felt a profound kinship and familial closeness with the Sopranos gang over the last eight years. It’s widely agreed that the show was always incidentally about mob matters; it was more of an ongoing reflection of the American post-millennial family experience, whether by blood or friendship or the workplace — always shifting, haphazard, dysfunctional…dread lurking around every corner. But with that communal feeling running through it like a river.

It resonated a bit more for me personally because I come from a leafy, mid-sized whitebread town in New Jersey, and I remember with mixed feelings the guinea- goombah types who lived on the town’s south side (i.e., literally on the other side of the tracks). They always kept a certain distance from non-Italians like myself, and they were into serious bonding. I remember walking through a small park when I was in seventh or eighth grade, and five or six of them were hanging next to a bench. One of them called out, “Hey, man…are you a guinea?” No, I said. “Then what good are ya?” he answered. The paisans all snickered.

Here’s a N.Y. Times piece by Bill Carter about what HBO’s creative team — led by honcho Chris Albrecht — are cooking up for an encore. A series called John From Cincinnati — “a drama that combines the zen of the surfing culture with doses of philosophy, quantum physics and dysfunctional family life…[and] a visit from what may be an extraterrestrial” — is mentioned. Surfing culture?

Of all the blog tributes to journalist Cathy Seipp, who departed yesterday afternoon around 2 pm, I was most touched by Luke Ford‘s. A memorial gathering is happening at Mt. Sinai Hollywood Hills (5950 Forest Lawn Drive) tomorrow Friday morning at 10 ayem.

That L.A. Times dustup over editorial page editor Andres Martinez putting the high hard one to 42 West publicist Kelly Mullens has been the thing to talk about for the last 24 hours. That’s due to their relationship having created a slight appearance of unseemly influence regarding the Times having chosen producer Brian Grazer — whom Mullens has been working for, being a client of 42 West– to be a “guest editor” of Sunday’s L.A. Times‘ Current section.

It’s a fun story (soap-opera tawdry, house of Borgia) to write about, and yes, “appearances” of impropriety and undue influence are no small thing, but it’ doesn’t seem like much of a big deal to me. This town runs on gimmes, mutual back-scratchings, sweetheart relationships and so on. Imperial Rome worked that way also; ditto ancient Athens.