I went to a first-time-anywhere screening last night of Gary Leva‘s Fog City Mavericks — a tribute to big-name Bay Area filmmakers (George Lucas, Carroll Ballard, Francis Coppola, Chris Columbus, Clint Eastwood, John Lasseter, Phil Kaufman, Walter Murch, Sofia Coppola, Saul Zaentz, Brad Bird) and how they all broke away from Hollywood roughly 30 or 40 years ago (or became regionally self-created) and became anti-establishment, quasi-bohemian regional filmmakers, and therefore an inspiration to all independent-minded filmmakers everywhere. Guys who followed their vision, made money, did it their own way, developed their own kwan. 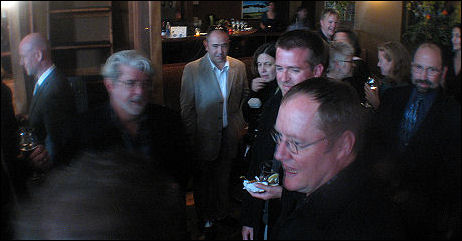 Blurry George Lucas, John Lasseter (r.) joshing with each other at pre-party for Fog City Mavericks

The story that Reva tells is true — these guys really did establish their own film- making shangri-la in the ’60s, ’70s and early to mid ’80s. But it’s willfully incom- plete. The fact is that the romance and vitality of the Bay Area film scene began to dissipate in the mid to late ’80s, and that with the exception of the success of Pixar, the juices — economic, regional, spiritual — aren’t flowing like they used to. And Reva’s film doesn’t begin to acknowledge this.

The narration, voiced by Peter Coyote, is tritely written and absolutely rancid with cliches. My eyes were rolling; my sighs were constant and probably irritating to the person in the next seat.

Everyone profiled in this film (including the extremely maverick-minded Sofia Coppola) is depicted as brave, pure of heart, tenacious, gifted, full of spirit and belief in themselves — all of them pretty darn wonderful.

A doc reflecting such heavy doses of regional pride without any balancing colors or considerations would be pooh-poohed off the screen in any other city. A tough Manhattan crowd would eat this film (and its director) alive. 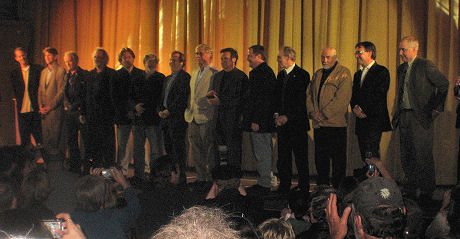 It’s a shame that Fog City Mavericks is such a self-fellating piece of work because, as the notes say, cinema was arguably invented in San Francisco, and that “the spirit of cutting-edge innovation that characterizes the work of Bay Area filmmakers is part and parcel of the maverick approach that drives San Francisco’s creative output, from the literature of the Beats to the technological revolutions of Silicon Valley.” Reva’s film purportedly “examines the way that the DNA of San Francisco affects and reflects the lives and work of its artists,” blah, blah.

That’s a decent idea, but to make a good doc about a culture you have to talk to at least some people who aren’t invested in the local economy. Then you have to be willing to be hard and real. You have to mix the gritty with the triumphant, the ups and the downs, the slumps and the highs….you have to forget about what will make the locals feel good and concentrate on the damn truth of it all. Some other filmmaker should take another shot at this subject some day. It’s a good story and full of great material — it just needs to be properly rendered.

USA Today‘s Scott Bowles has written a nice gentle softball profile of Spider-Man 3 director Sam Raimi — the midwestern upbringing, how he was first bitten by the film bug, how he climbed up the ladder, how he suffered a career setback with The Quick and the Dead and Darkman, how he got his mojo back with A Simple Plan, how he always wears suits, etc. And not a word about his financial support for certain Dark Men, including George W. Bush. Like it doesn’t matter. As if such things are peripheral.

MCN’s David Poland has ripped into Sam Raimi‘s Spider-Man 3 with a fervor that I haven’t picked up from one of his reviews since he thrashed Charlie’s Angels: Full Throttle in ’03.

“There is so much incredibly expensive CG action in this film that many will get through it, not really dislike it, but have a vaguely displeased gut feeling,” Poland concludes. “I can’t really say it is a horrible movie. But it is quite a mess — a mess of good intentions gone terribly wrong.

“And it does, indeed, feel like the end of this franchise as we know it. Given the rote nature of this one, almost hidden by the flailing of attempted drama — flailing like a marlin on a 300 lb test line — it’s probably time to cash those checks and move along.”

I have to catch a jet back to Burbank…no more filing until the late afternoon.

“In the Electric Mist With the Confederate Dead,” a cult novel written by James Lee Burke, has been adapted into a screenplay and is now being directed by the great Bertrand Tavernier — his first English-language film since ‘Round Midnight — in Louisiana. The problem is that the movie is going to be called In The Electric Mist, which obviously doesn’t get it.

We all know that eight words don’t fit on a marquee but they should stick with the book title anyway because it sounds right. Chopping the title in half is a crude dumb-down procedure.

I’ve read the script, an atmospheric detective story about the hunt for a serial killer of women, and it’s very high quality. Tommy Lee Jones (who co-wrote the screenplay with Jerzy Kromolowski and Mary Olson-Kromolowski) is playing the lead role of Robicheaux, a small-town policeman and an ex-alcoholic Vietnam veteran doing the old Phillip Marlowe-Hercule Poirot routine. Peter Sarsgaard is playing an over-indulged Hollywood star who’s shooting a film in the area. 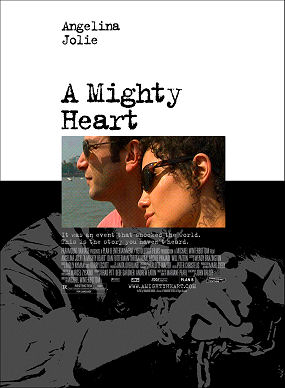 The jungle drumbeat starts today for Paramount Vantage and Michael Winterbottom‘s A Mighty Heart, which will show at Cannes and open in the U.S. on 6.22.07.
April 30, 2007 11:36 amby Jeffrey Wells
15 Comments
Peter Sellars at the Kabuki 8 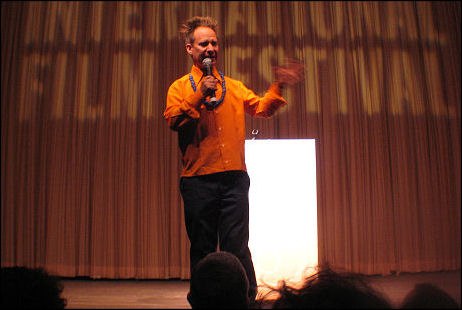 In yesterday’s item about an Academy Oscar-buzz survey that will soon be received by Academy members, I said that the questionaire will ask where Academy members get their Oscar-race information and to what degree…”from the trades or online sites like this one (or Hollywood Wiretap, The Envelope, Nikki Finke, Movie City News) or Patrick Goldstein‘s column or David Carr or what-have-you?”

It was just a dash-off thing, but I failed to mention Sasha Stone‘s Oscar Watch.com, which is perhaps the comprehensive and longest-running site about Oscar-race analysis. And boy, did I hear about this! I felt like a Navy pilot flying over North Vietnam and suddenly six telephone-pole-sized SAM’s were surging up from the ground.

Gee, I don’t know…is it possible that some kind of suppressed emotional blockage was a factor? Because she seems to — I want to be careful to use the best word — urinate on me and my writings every time she posts anything here? Example: I said I’d be running video reports from Cannes and possibly before, and she wrote “why does everyone feel the need to impose themselves on the general public?” Now, that’s a pissy, cranky-ass thing to say, and 90% of the time she’s coming from a similar place.

I truly respect and admire Sasha and her site, but I think it’s understandable why Oscarwatch didn’t immediately come to mind when I tapped that item out.

14 Comments
Love after the first year

“I think we have a really hard time culturally with what happens to love after the first year,” says Away From Her director Sarah Polley in N.Y. Times piece by Katrina Onstad. “It is difficult, and it is painful, and it is a letdown. [But] that first year is so much less profound than what happens when you’re actually left with each other and yourself in an honest way. It was interesting to me to make a film about what love looked like after life had gotten in the way, and what remained.”

The ballad of the sad arthouse — i.e., the struggling and (for now) still-hanging-in-there Brattle Street theatre in Cambridge, as reported by the Toronto Star‘s Peter Howell. 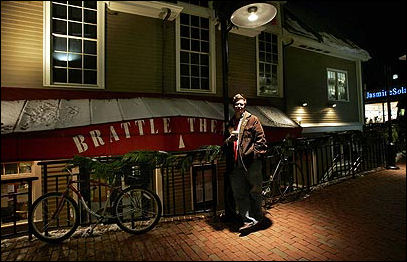 Go the the N.Y. Post site and Reed Tucker‘s laundry-list piece about summer threequels — neutral attitude, no opinion of any kind, and focusing almost entirely on the horse-race aspect (which will make the most money?) and ignoring the certainty that the only tolerable ones will be The Bourne Ultimatum and Ocean’s Thirteen.