“When Premiere magazine announced last month that its April issue would be its last, the epitaph for long-form movie journalism may well have been written,” Anne Thompson declares in her latest Variety column. “After all, in a world where movie fans can read about movies, see pictures, trailers and video, and find their theaters and showtimes online, who needs a movie magazine anymore?

“At a time when the likes of celebrity website TMZ.com, Defamer and People.com rush amateur photos of the Hollywood Hills brush fire and news of Mel Gibson‘s latest indiscretion to the web at the speed of thought, writers and editors who once specialized in crafting polished in-depth insider features about Hollywood stars and filmmakers are learning the mantra of the web: Write fast — and write short.”

Plus it’s nice to be mentioned in this graph: “Now there’s too much clutter in the online movie space to grab a toehold. How to compete with Rotten Tomatoes, the Internet Movie Data Base (IMDb), E! Online, Fandango, CHUD, IGN Film Force, Yahoo Movies, Movie City News, Movies.com and AOL Moviefone, not to mention bloggers such as Perezhilton, Deadline Hollywood Daily, Cinematical, and Hollywood Elsewhere?

I’ve been sent the script of Danny Strong‘s Recount, and it’s as good as I’d heard and hoped it would be. As I wrote a couple of days ago, it’s the basis of an HBO feature that Sydney Pollack will start directing within a few weeks’ time (for airing in early ’08), about the battle over the Florida returns in the wake of the 2000 presidential election and how the George Bush forces managed to finagle things in their favor at the end of the day. 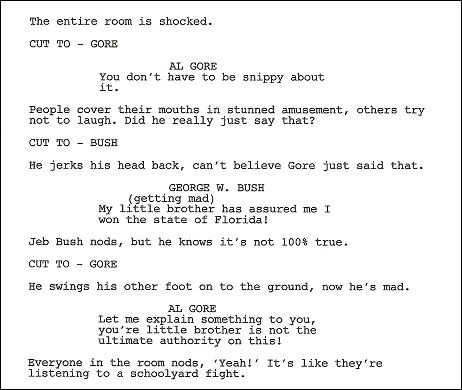 I don’t want to give anything anyway, but I thought I’d let everyone read a five-page excerpt that covers the back and forth between the Gore and Bush campaigns at the moment when everyone realizes the Florida election is too close to call. I chose this portion because much of the dialogue has been used and repeated in news stories and books about this historic political spin battle. But these five pages give you a sense of how cleanly written and down-to-it Strong’s script is. Tell me if you don’t agree.

The following quote appears on page 137, and again, I am revealing nothing as it is from a published dissenting opinion by Supreme Court Justice John Paul Stevens regarding Bush. vs. Gore: “Although we may never know with complete certainty the winner of this year’s presidential election, the identity of the loser is perfectly clear. It is the nation’s confidence in the judge as an impartial guardian of the rule of law.”

I saw the first two installments of HBO’s final Sopranos season last night, and as usual, they’re fantastic and brilliant and darkly funny and all the other superlatives, but there’s not much in the way of any pulverizing story turns — nothing decisive or darkly threatening at all regarding the fate of Anthony J. Soprano, his immediate family or associates.

Okay, a prominent character — a rival — meets his ultimate fate but not at the hand of an assassin or lawman, and yes, tensions between Tony and two of his closest family allies come seeping to the surface, but we’re all familiar with how producer- creator David Chase like this series to play and feel. Aroma, character, emotional undercurrents and karma simmering over a low flame in a kitchen in a big fat New Jersey McMansion. The series always hits home and sinks in, but rarely in the way of Shakespearean high drama.

There sure as shit isn’t anything at all in the way of a narrative toboggan ride in episodes #78 (“Sopranos Home Movies”) and #79 (“Stage 5”), I can tell you. But I loved every minute. I was in pig heaven. In fact, I watched the second installment twice.

You wouldn’t think that a longish scene about four close family members (Tony, Carmela, Bobby, Janice) playing Monopoly at a vacation house on a big lake could result in dramatic fireworks, but the one in the first episode does. (Actually, the way a person plays Monopoly is character-revealing. I noticed that about my kids when we played when they were eight and nine.)

Does anything “happen” in this episode? Not really, but it’s hard to tell with this series. Maybe some kind of plot seed is being planted….maybe. Wherever they’re going, Chase and his writers are certainly in no hurry.

The second episode is about Christopher Moltisanti’s slasher movie, Cleaver, and about a certain party dealing with illness and possible death. I’m not going to get into it any further except to say that director Sydney Pollack is superb as an orderly in a prison hospital who was put in jail for killing his wife and two others. (Has Pollack ever given a performance that didn’t feel absolutely grounded and believable? He was easily the best thing in Husbands and Wives, Changing Lanes, Eyes Wide Shut, etc.) 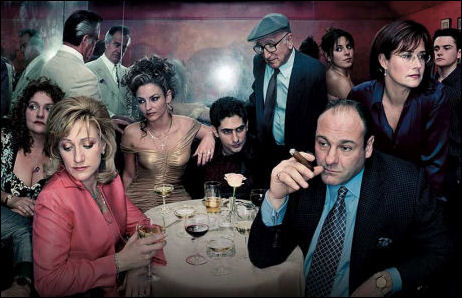 I don’t sense a bullet in Tony’s future — I just don’t see it. Chase is not a black- and-white moralist who needs his sinners to pay up. Besides, the pressure must be enormous to keep the boss alive in case someone wants to try and shoot a feature-film version down the road. I don’t know anything and I can’t smell anything either (not with this series), but if anyone’s going to get whacked it’ll be Bobby or Christopher or Phil Leotardo…one of those guys. But I really don’t know anything.

The trailer for Pirates of the Caribbean: At World’s End (Disney, 5.25) does make the film seem like it might be a pretty agreeable serving of horseshit eye-candy. Question is, how long will it be? I wouldn’t have disliked the second one if it had been, say, 20 or 30 minutes shorter. A jape should never be lengthy. It should run 100 or 110 minutes, tops. 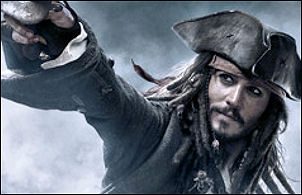 I just want to say that I went out for a moonlit walk last night (i.e., after watching the first two final-season-of-The Sopranos episodes on DVD) and thought long and hard about all the haters bashing me for delivering my honest opinion of Bob Clark‘s movies in the same piece in which I reported the terrible news of his death. Obviously the consensus among 90% of the readership is that it is foul and diseased to be render any kind of mixed or negative verdict on a person’s work concurrent with their death announcement. That’s how I’m reading it, and maybe the haters are right.

In deference to this, I hereby pledge that when the next film artist dies, I will wait…uhm, 24 hours before running negative comments about their work. Is that long enough or should I wait for 48 or 72 hours? Or should I wait a bit longer? A week, a month…you tell me. How about six months or a year? Or should I refrain from ever saying anything critical or contrary about their work once they’ve passed on? How about a general law that says once a person has died, everything they did merits respect and, if at all possible, a certain retrospective positivism?

I’m trying not to be snide. I just felt badly about Clark’s passing and reported it, and then I thought, “Well, do I say anything about his work?” and figured I probably shouldn’t because I didn’t like his films, but then I considered that all obituaries include some kind of assessment about how the deceased and/or his work was generally regarded, and that would mean acknowledging that Clark was a two- time Razzie winner who made Turk 182, one of the worst films of the 20th Century, and then I thought if I’m going to acknowledge that general line of critical thinking I might as well be honest and mention what I personally think…and it went from there.

Whatever really happened between Keith Richards and his dad’s ashes in ’02 — i.e., he snorted a small portion with a line of cocaine or he used them to fertilize a tree — no one but no one believes Richards’ manager’s claim that the snorting story was uttered in jest. (Even if it was.) 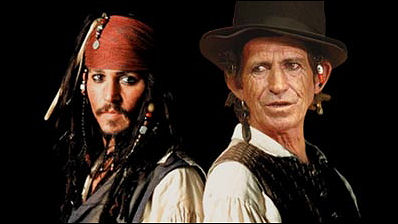 Just as everyone presumes that Richards’ rep issued the denial because she heard from alarmed Disney publicist Dennis Rice (or from some lackey in the Disney pipeline) and was told that dad-snorting wouldn’t go over with the family-fare donkeys who support the Pirates of the Carribbean films in the greatest numbers, and that the whole thing needed to be spun into oblivion.

But the really ridiculous comment in this L.A. Times/Sheigh Crabtree reaction piece is the one in which Rice says, “Keith won’t be doing a lot of publicity for this movie.” In other words, he’s a loose cannon and his press chats on behalf of Pirates of the Caribbean: At World’s End are going to severely restricted if not eliminated. What did Disney marketers expect when Richards was hired to play Johnny Depp‘s pirate dad? That he’d comport himself like Dick Van Dyke?