“From the moment he steps onstage, with his hunched walk and lumbering step, Frank Langella has avoided the obvious route of Rich Little-style impersonation of one of the most impersonated figures in history. What he delivers instead is an interpretation that, without imitation, still captures and exaggerates Richard Nixon‘s essential public traits: the buttered-gravel voice, the scowling smile, the joviality that seemed to contain an implicit threat.

“The friend with whom I saw the play asked me afterward if I had noticed how much better Langella’s Nixon impersonation became as the show progressed. Langella’s performance had not changed, but by evening’s end it had eclipsed the familiar photographic image of the real man. Like Helen Mirren‘s understated Elizabeth II in The Queen, this overstated Nixon seems destined forever to blend into and enrich the perceptions of its prototype for anyone who sees it.” — from Ben Brantley‘s review of Frost/Nixon in the 4.23 edition of the N.Y. Times.

And yet Ron Howard, fearful of moviegoers who may be not be innately aroused by Langella’s talent, wants to cast a “name” guy to play Nixon for his movie version, which starts shooting in August. Note to Ron: cast the best man and the hell with marquee value. Make the best film you can and make your next bundle from Angels and Demons. The Frost/Nixon film isn’t going to break records no matter who plays Nixon. Forget the Wild Hogs crowd, the airport-fiction readers, the Da Vinci Code mouth-breathers…forget ’em all.

L.A. Observed is reporting (and I heard this independently today on my own) that about 70 L.A. Times newsroom jobs are being chopped, which will reduce the editorial staff “from 920 to around 850.” Okay, that’s rough and I’m sorry for those about to be put out to pasture, but if the the paper version of the Los Angeles Times were to disappear tomorrow, a part of me would truly rejoice. I’ve never loathed a newspaper in my life like I hate the Los Angeles Times with those wads and wads of ad supplements falling out all over the place when I read it in a cafe. I love reading a lot of the L.A. Times reporters and columnists, but I hate the paper Times with a passion. Save the forests and make it all cyber. Better yet, bring back the L.A. Herald Examiner.

Danny Boyle‘s Sunshine (Fox Searchlight, 9.14), a sci-fier about a team of astronauts on a celestial mission to re-ignite a dying sun, won’t open stateside until after Labor Day, but it opened across Europe earlier this month. Some British and European critics have been groaning about the ending, but so far it’s got an above-average 88 % Rotten Tomatoes rating, so it doesn’t sound too problematic. It sounds excellent, in fact, if you leave out the equation of the finale. 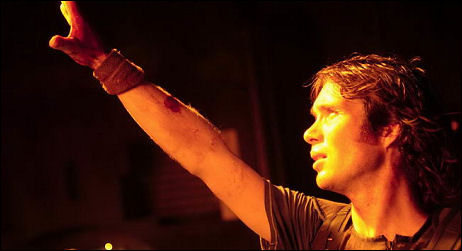 I’ve asked the Fox Searchlight folks about seeing Sunshine here in Los Angeles before flying off to France and the Cannes Film Festival on 5.14, but so far they haven’t replied. If my suggestion continues to fall on deaf ears I guess I’ll just take a train to Nice and see it in some paid-ticket multiplex during the festival. (It runs from 5.16 to 5.27, and I’m guessing — hoping — that Sunshine, which opened in France on 4.11, will still be playing five weeks later.) I guess I could also see it somewhere in Italy since I’ll be going there for a few budget-conscious days after Cannes.

On one level it’s pain in the ass to have to chase down a movie this way, but it’ll also be kind of fun.

13 Comments
“Once” is coming

John Carney‘s Once, the most unassuming and wholesomely affecting love story in years that turned into the Big Find at Sundance ’07, opens on May 18th — a little less than four weeks off. Fox Searchlight, which acquired it last February, has launched its own Once website. (The Irish version has a little more pizazz.) Here, in any event, is a fairly decent trailer that catches the mood and tone of the feature. 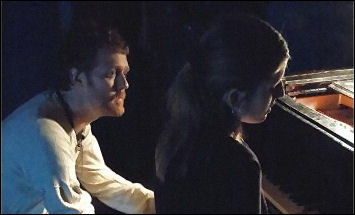 This little Dublin-shot film is about a couple of gifted but struggling musicians — a scruffy, red-bearded troubadour (Glen Hansard, best known for his Irish group The Frames) and a young Czech immigrant mom (pianist and singer Marketa Irglova) — falling for each other by learning, singing and playing each other’s songs. That’s it…the all of it. And it’s more than enough.

Calling Once a “musical” doesn’t quite get it because it’s really its own bird — it’s a tweaking (almost a reinvention) of the form in the vein of Cabaret, A Hard Day’s Night and Dancer in the Dark. On top of which it’s gently soothing in a low-budget, unforced way.. It’s about struggle and want and uncertainty, but with a kind of easy Dublin glide-along attitude that makes it all go down easy.

Once is about spirit, songs and smiles, lots of guitar strumming, a sprinkling of hurt and sadness and disappointment and — this is atypical — no sex, and not even a glorious, Claude Lelouch-style kiss-and-hug at the finale. But it works at the end — it feels whole, together, self-levitated.

Trust me — there isn’t a woman or a soulful guy out there who won’t respond to Once if they can be persuaded to just watch it. The trick, obviously, is to make that happen, and I admit there may be some resistance. Initially. But once people sit back and let it in (and they’d have to be made of second-rate styrofoam for that not to happen), the game will be more or less won. Settled, I mean.

Carney, Hansard and Irglova are starting a 15-market p.r. tour from April 30 to May 18. They’re in Manhattan on May 1st and Los Angeles on May 15th. In each city Fox will be holding special promotional showings followed by a performance and q & a in each market, which is the template that worked so well at each one of the Sundance screenings last January.

It’s a little raggedy and amateurish — it could obviously be a lot smoother and slicker — but the Black 20 folks who made this Spider-Man 3 product-placement trailer were coming from a good place.