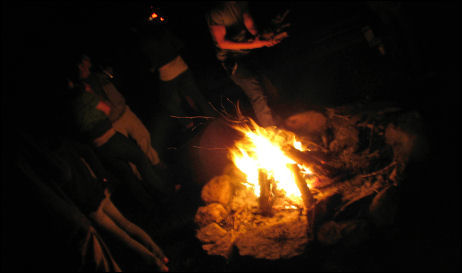 “There are three things that Democratic political candidates tend to do when talking with constituents: they display an impressive grasp of the minutiae of their constituents’ problems, particularly money problems; they rouse indignation by explaining how those problems are caused by powerful groups getting rich on the backs of ordinary people; and they present well-worked-out policy proposals that, if passed, would solve the problems and put the powerful groups in their place.

“Barack Obama seldom does any of these things. He tends to underplay his knowledge, acting less informed than he is. He rarely accuses, preferring to talk about problems in the passive voice, as things that are amiss with us rather than as wrongs that have been perpetrated by them. And the solutions he offers generally sound small and local rather than deep-reaching and systemic.” — from a very wise, thorough and well-written New Yorker profile of Obama, dated 5.7.07 and called “The Conciliator.” The author is Larissa MacFarquhar.

Bruce Willis attempted to spin the recent anti-Live Free or Die Hard buzz (i.e, that it’s been marginally deballed in order to earn a PG-13 rating and therefore may not be a genuine kick-ass Die Hard flick) by calling Harry Knowles at home a day or so ago.

Since the PG-13 brouhaha arose out of a Peter Biskind interview with Willis in the new Vanity Fair, Willis told Knowles that “his comments had been taken out of place and that Biskind focused on [the rating issue] more than he felt was justified, especially since at the point in which he talked to Peter about Die Hard 4, he hadn’t actually seen it yet.

“According to Bruce, he feels this Die Hard is right there with the original, and that if you didn’t know it was PG-13, you couldn’t tell, because it got him to the edge of his seat at least 6 times. Now, it might not have as many ‘fucks’ as in the past, but the action and intensity, he swears, is there.”

Willis once called me at home…13 and 1/2 years ago. He was pissed over an Entertainment Weekly article that I’d written (my sources were as good as they could’ve been) that said that his swaggering big-star behavior was largely respon- sible for shooting complications and added production costs on an action film called Striking Distance. He felt he’d been sand-bagged and called to vent (naturally) and maybe figure who my sources had been. I respected that he did this himself and didn’t have some flunky publicist call instead.

Fay Grim and Broken Engish star Parker Posey “refuses to play a role in the hoary media ritual,” observes N.Y. Times writer David Carr. “Most actors manage to bring every conversation gracefully and stealthily back to their brilliant, courageous career choices. Posey, 38, is precisely the opposite, [and] discursive in the extreme.”

Exactly — that’s what I found so engaging about her. Not once did she try to steer our chat over to the merits of Fay Grim. And yet with Carr…

“Wasn’t Apocalypto amazing?√É¬¢√¢‚Äö¬¨√Ç¬ù she says. √É¬¢√¢‚Äö¬¨√Ö‚ÄúDid you love it? I have it on DVD. I’ve watched it like, oh, my God, I am Jaguar Paw. It was so powerful. It was so interesting. The karma of him, right? This past year to have this whole thing happen to him where he was like shunned by Hollywood and then he makes this — I mean he’s a rebel. He’s a passionate person who, you know, you see it all in that movie.”

Wasn’t the point of the Malibu sugar-tits bust that Gibson acted like a drunk? Plus the fact that Gibson had made Apocalypto well before it happened.

“‘What are they doing?’ a 5-year-old boy asked his parents when an explicit sexual scene showed up on his TV screen [a few days ago].

“The movie industry has been in the business of big — big stars, big stories, big productions, big screens and big returns — about as long as it’s been a business,” writes N.Y. Times critic Manohla Dargis in her Sunday piece called “Defending Goliath: Hollywood and the Art of the Blockbuster.” And, she adds, “as long as the movies have told stories, they have used spectacle to sell those stories.”

Dargis’s point is that there’s not a whole lot of difference between emotionally primitive ’50s style spectacles like The Ten Commandments and Ben-Hur and the current assortment as represented by 300 and Spider-man 3. She chooses not to mention a crucial difference, though. Today’s blockbusters (which are of a much, much lower gene-pool order than ’90s blockbusters like, say, Titanic or Terminator 2) are far more emotionally primitive and at least five times dumber than any primitive-attitude mega-budget costume flick of 40 or 50 years ago.

To put it simply and bluntly, the culture has seriously devolved since the days of the Eisenhower, Kennedy and Johnson administrations, and the quality and mentality of current blockbusters simply reflect that process.

In reporting that John Malkovich is “in talks” to costar in Joel and Ethan Coen‘s Burn Ater Reading, a half-serious, half-doofusy dark comedy set to begin shooting in August with Brad Pitt, George Clooney and Frances McDormand playing major roles, the Hollywood Reporter wrote that the Coens’ screenplay “is being kept under wraps” and that “it is unclear what Pitt’s character will be.” 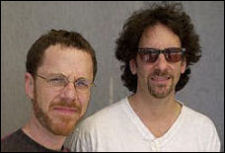 I can clear that mystery up since I finished the script this morning. Pitt is playing a dumb health freak and workout trainer (i.e., dumb in the way that William H. Macy‘s character was on the not-fully-comprehending side in Fargo). The trainer is called Chad Feldheimer, and is described in the Coen script as “fortyish and well-muscled.”

The story kicks into gear when Chad partners with a fellow gym worker — a neurotic 40ish woman named Linda who’s looking for a way to afford some heavy-duty plastic surgery in order to improve her love life — in trying to shake down an embittered CIA employee named Osbourne Cox (Malkovich) who’s written a CIA tell-all that contains lots of sensitive hot-button material. Cox has lost the disc, though, and Chad has found it at the gym he and Linda work at.

I don’t know who’s playing Linda, by the way, but it’s not McDormand. It’s a splendid part. Whoever gets it is going to have something she can point to with pride for decades to come. I would offer it to someone a bit older but pretty — Julianne Moore. Someone who doesn’t need plastic surgery as much as a four-day weekend at an ashram.

The script isn’t all that secretive because I was sent a copy a few days ago, and if guys like me are reading it you can bet a lot of others are also.

I love Burn After Reading. It’s about hubris, stupidity, ineptitude, unbridled egotism — all traits that the Coens have worked with before to delicious and splendid effect. It’s arch and sardonic and inflected with that wonderfully dark Coen attitude and some really first-rate character-embroidery (a la Fargo and Barton Fink), and yet it’s sometimes laugh-out-loud funny in the vein of The Big Lebowski and Intolerable Cruelty.

If they do it right (I’m particularly jazzed by the idea of Emmanuel Lubezski doing the hand-held photography), this may well turn out to be, for the Coens, an uncommon mainstream hit. It reads, in fact, like one of those once-in-a-blue-moon Coen sweet-spot movies, and I say that as someone who wasn’t at all delighted with The Ladykillers or The Man Who Wasn’t There, was “comme ci comme ca” with O Brother, Where Art Thou? and Miller’s Crossing, and who still finds it difficult to watch Raising Arizona without getting irritated.

Variety is reporting what I posted yesterday morning — a first-weekend tally of $148 million for Spider-Man 3. That’s the biggest domestic opening weekend ever. The comic-book extravaganza from the hand of director, co-writer and Republican supporter Sam Raimi also took in $375 million worldwide, which is the biggest across-the-globe tally in human history.

Congratulations, lemmings! By supporting a mediocre film to this degree you have guaranteed that more big-scale CG mediocrities (i.e., dumbed-down behemoths that don’t logically add up or contain anything in the way of cleverness or skillful character construction, etc.) will be cranked out in the years and decades to come. You’ve told Hollywood in unmistakable terms, “Lower the bar all you want ….we’ll come anyway as long the movie has cool CG and it’s a major tentpole event flick that all our friends are hot to see…hoo-hoo!”