It’s not smoking in movies per se that’s so bad, but actors who use constant smoking as a behavioral crutch. Smoking can look marginally cool depending on how skilled or preternaturally cool the actor is, but it becomes extremely tedious and off-putting when done to excess. Now the Motion Picture Association of America is stepping in for somewhat different reasons and declaring that smoking will now affect movie ratings….maybe. A few too many self-conscious lungfuls and a film may end up with…what? An R rather than a PG-13? A PG-13 rather than a PG? Something along those lines.

Variety‘s William Triplett is reporting that the MPAA, “responding to years of criticism from child advocacy groups and health organization, announced Thursday it is expanding its current consideration of teen smoking to all smoking when evaluating and assigning a movie rating.”
“‘In the past, illegal teen smoking has been a factor in the rating of films, alongside other parental concerns such as sex, violence and adult language,’ the org said in a statement. ‘Now, all smoking will be considered and depictions that glamorize smoking or movies that feature pervasive smoking outside of an historic or other mitigating context may receive a higher rating.” Higher? Economically compromising, they mean.
This is almost akin to prohibition and will probably raise a stink among who make their living playing bad guys, but anything that cuts down on a truly offensive acting tendency is okay with me, even though the MPAA’s idea is on the dopey side.
The key MPAA declaration is that smoking in movies “outside of an historic or other mitigating context” will be more closely examined. But what’s an acceptable mitigating context? Smoking is a shorthand device for characters who are meant to be seen as outlaw-ish or anti-social. But what about an actress playing a middle-aged divorcee with self-destructive or low self-esteem issues? What about a nervous 15 year-old who’s trying to look cool in front of his friends. Thee are all kinds of characters who could light up in a valid way.

The last two and half days were so awful, and then this framed photo arrived via Fed Ex this afternoon. Talk about a radical mood swing and the kindness of strangers. An HE fan whom I don’t know saw that post three or four weeks ago about that damaged print of Jack Nicholson and got inspired and threw this together with a glass cover and a classy wood frame and everything. It’s now hanging on the den wall. 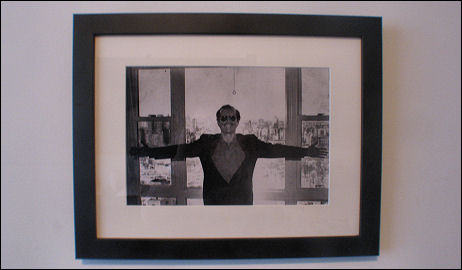 Thanks so much to everyone else who sent along cleaned-up JPEGs of the Jack shot, by the way. Sorry for not saying this earlier. This whole Jack-shot episode has been really beautiful.

I always thought of Las Vegas is a cool place to visit for about 24 hours, after which it starts to get old fast. But then along came the uptown, reconfigured, Trevor Groth-approved Cinevegas Film Festival and I started to amend that view. Seeing choice movies (some fresh out of the gate) and attending parties with fairly hot women every night makes it all go down easier.
There’s still something over-electrified and soul-frying about that town, and the only thing I used to really love about the casinos — the loud metallic clatter of silver dollars falling into the tray of the big slot machines — is gone now. And Vegas is horrible for walking anywhere, and the bus service is slow as snails. But Cinevegas (June 6th to 16th) is a better-than-okay festival for the most part, and sometimes a pretty good one. And then there’s hanging with Las Vegas Review Journal critic Carol Cling, which is always time well spent.
Steven Soderbergh‘s Ocean’s 13 (which I’ll be seeing in Cannes in about a week and a half, if not sooner) and John Dahl‘s You Kill Me are the opening night and closing night attractions.
√É¬¢√¢‚Äö¬¨√Ö‚ÄúCineVegas is a celebration of artists who lay it all on the line, who aren√É¬¢√¢‚Äö¬¨√¢‚Äû¬¢t afraid to shatter conventions and defy expectation,” Groth says in the BWR press release. “From our world premieres of American independents and new Mexican films, which both consist of brave works by predominantly first and second-time filmmakers, the festival is a goldmine of talent waiting to be discovered.√É¬¢√¢‚Äö¬¨√Ç¬ù
The √É¬¢√¢‚Äö¬¨√Ö‚ÄúJackpot Premieres√É¬¢√¢‚Äö¬¨√Ç¬ù are Robert Logevall√É¬¢√¢‚Äö¬¨√¢‚Äû¬¢s All God√É¬¢√¢‚Äö¬¨√¢‚Äû¬¢s Children Can Dance (world premiere), with Joan Chen; the Peter Spears’ comedy Careless (world premiere), starring Colin Hanks, Fran Kranz, Rachel Blanchard and Tony Shalhoub; Choose Connor (world premiere), a political drama starring Steven Weber and Alex Linz, directed by Luke Eberl; The Fifth Patient (world premiere); The Living Wake (world premiere) starring Jesse Eisenberg and Mike O√É¬¢√¢‚Äö¬¨√¢‚Äû¬¢Connell in a dark comedy from director Sol Tryon…I’ll get into the rest down the road.
Cinevegas used to pretty much stick with its own premieres, but this year it has two new sections — “Diamond Discoveries√É¬¢√¢‚Äö¬¨√Ç¬ù (previously premiered new films available for U.S. distribution) and √É¬¢√¢‚Äö¬¨√Ö‚ÄúSure Bets√É¬¢√¢‚Äö¬¨√Ç¬ù (upcoming films with U.S. distribution). A chance, in other words, to catch up with films one might have missed at other festivals or at regular pre-release screenings. Good move.

Doing time for 45 days is going to be the best thing that ever happened to Paris Hilton. I did a little time in L.A. County in the late ’70s for some unpaid parking tickets, and it sure as hell clears the clutter out of your head and leaves you with something that feels a lot like focus and fortitude. And if there’s anyone on the face of the planet who could use some of this more than Paris Hilton, I’d like to know who that is.
Jail is awful but if you can grim up and face it down, you come out feeling as if you’re a better and a somewhat stronger person. I only did three or four days so I don’t know about hard time. But I know enough about the sound of clanging steel doors to recognize the truth of a line that Dustin Hoffman said in Ulu Grosbard‘s Straight Time: “Outside it’s what you have in your pockets — inside it’s who you are.”
45 days in the pokey won’t be a walk in the park for a ditzoid like Paris Hilton, but if she’s smart she’ll read up about how Robert Mitchum handled his jail sentence in the late ’40s for marijuana possession. He did it quietly and didn’t squawk. He swept the floors, stayed out of trouble, took his medicine and had won everyone’s respect by the time he got out. I don’t think for a second that our very own empty- headed, barren-souled heiress has the character to “do a Mitchum,” but the most potentially profound spiritual experience of her so-far-useless life awaits nonetheless.
And there’s nothing like getting out of jail to make you feel like Jesus’ son. (Or Mary Magdelene‘s daughter.) It reminds you what a wonderful and blessed place the world outside is, and what a sublime thing trip it can be to walk around free and do whatever you want within the usual boundaries, and what a serene thing it is to be smiled at by strangers in stores and restaurants. People you wouldn’t give a second thought to suddenly seem like good samaritans because of some act of casual kindness.
Jail doesn’t just teach you about yourself but about your immediate circle. “If you want to know who your friends are,” Charles Bukowski once wrote, “get yourself a jail sentence.” Or go to a hospital. As foul and bullying as he often is, David Poland nonetheless called and left a get-well message when I had that systemic poisoning episode a few months ago. I’m just saying.

And so begins the rejuvenated, out-of-the-woods, post-hard drive crash, five-pounds-lighter-due-to-stress phase of Hollywood Elsewhere, with only five days to spare before the flight to Cannes. The new hard drive is installed, all the programs are re-installed and running, and pretty much everything is back to normal.
Before anything else I need to give a shout-out to Angelo Moratta, the guy who got me out of this mess more than anyone else. Angelo runs a shop about 50 miles north of Manhattan called Mindtrain Computer Services, and if you’re ever in any kind of serious dutch with your computer you need to call this guy, seriously. He’s got one of those great remote control hookup systems in which you let him see your computer screen and access everything in it, and it’s just like having a house call. Plus Angelo’s got a relaxed and gentle voice (with a slight New Yawk accent), and he never gets riled and always figures it out, whatever the issue is.
Never trust the Geek Squad, never trust the Geek Squad, never trust the Geek Squad. They’re nice guys and they know what they know, but they’re not smart all the way around the track and they charge too much and they take forever. Or the fairly smart guy you spoke to the day before is taking a day off and the other guy who’s half-acquainted with the situation doesn’t come in until 3 pm. Forget ’em, bad news, exasperation time.
The only problem now is that it’s pretty warm outside and fairly stuffy in here, and the Oscar-winning lease holder on this apartment removed the air-conditioner — the one I bought a couple of years ago from the second-hand guy down the street — and put it under a bunch of boxes in an overstuffed hall closet. Do I spend an hour hooking it up (i.e., buying an extension cord and electrical power strip, cutting out a precisely cut slab of cardboard to seal off the window, finding masking tape to make sure it’s nice and tight) or just get down to today’s column items? These are the choices and the terms….and it’s always something.