Nellie McKay attempts a reselling of Doris Day — who she was (or seemed to be) on-screen, who she may have been off-screen, the bizarreness of her personality, her weirdly virginal nature — in a 6.3.07 N.Y. Times piece, which I for one am not buying for an instant. I admire Day’s work on behalf of animals, but she always played exceedingly strange women, especially from the mid ’50s on. Try and watch her labored performance in Alfred Hitchcock‘s 1955 version of The Man Who Knew Too Much without wincing.

“You really have to see John Travolta to believe him, especially toward the end of Hairspray when he finally lets loose — dressed in a fat suit as a woman in a red tutu and high heels — and dances up a storm in the film’s finale,” writes Fox 411’s Roger Friedman.
“I don’t know if it’s an Oscar performance, but I do know that when Hairspray is shown in big theaters (I saw it in a screening room, still a little unfinished), audiences are going to go wild with cheers and whistles. Travolta even signals the audience with his now-trademark ‘cat eye’ from Pulp Fiction as he launches like a spinning top onto the stage of the fictional Corny Collins Show. You can only love it. Somehow he brings that old Travolta warmth and charisma to a crazy costume.”

An okay but moderately boring Associated Press piece about franchise directors — Sam Raimi, Gore Verbinksi, Peter Jackson, Paul Greengrass, Tom Shadyac, etc. “Unlike Hollywood in earlier days, when any old director might take on a sequel, the same filmmaker continues to oversee the latest installments of most big franchises out this summer,” etc. 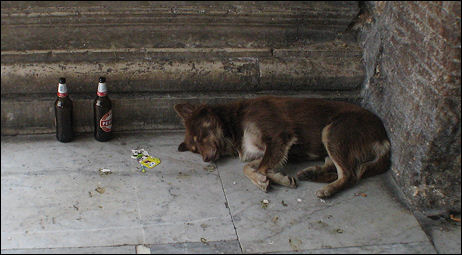 Under the Pantheon this morning and resting soundly; these guys were sleeping three or four feet away — Sunday, 6.3.07, 6:45 am 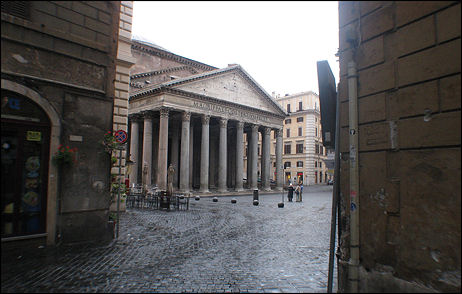 The notion of George Clooney being the new Cary Grant, or even that he’s vaguely Cary Grant-ish, was thin from the get-go. I thought it had been tossed aside, frankly, but now here’s David Thomson kicking it around again. Clooney himself would probably be the last guy to wink at this idea.
The entertainment world is full of tallish, trim, brown-eyed, good-looking, impeccably mannered lady-pleasers, and these superficial traits are nearly all these two men have ever shared, so to speak, save for a knack (a gift in Grant’s case) for playing light comedy and an agreeable way with broad comic gestures — double-takes, eyeball-popping, etc.
The thing that sets Grant apart is that urbane sophisticated Grant persona (i.e., an act that he developed bit by bit in the mid to late 1930s), that classy but almost testy sense of reserve (he always seemed to be masking his deep-down wants and hurts) and that wonderfully crisp and resonant voice, Americanized Bristol accent and all.
Clooney, by contrast, always seems to play a fairly open-minded good egg, confused or offended at times but generally smooth and amiable, open to all queries and opinions, etc. He doesn’t ever seem to duck or hide from anyone or anything. Plus he doesn’t have Grant’s practiced sense of polished, eyebrow- raising irony. His deepish voice is pleasing but with a kind of twangy Midwestern flavornig, which, for me, significantly reduces the would-be air of sophistication.
I don’t know why I’m going on about this — he and Grant are fairly different ducks who don’t even swim in the same pond. Not to put down Clooney for who and what he seems to be. But Grant is world-class. I wonder, now that I think of it, if Grant would have been as big in movies if he had been born, say, in 1955 or there- abouts? Would his temperament and acting style have meshed with the ’80s, ’90s and afterwards, or was “Cary Grant” a manifestation that could only have been shaped and refined and taken flight in the ’30s, ’40s and ’50s?