I’ve been wanting to talk to director Zoe Cassevetes since last January, which was when I saw Broken English, her first film. To my surprise I quite liked it, despite it being a kind of romantic comedy, which I tend to hate as a rule. It’s about a 30ish Manhattan hotel worker named Nora (Parker Posey) looking for the right dude and mostly getting hurt, and then finally getting lucky…sort of. The kind of luck that comes with interesting complications. 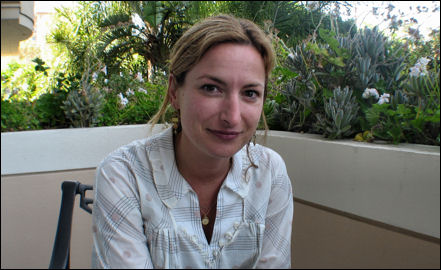 I did one of those quickie-sit-downs with Cassevetes Thursday afternoon at the Four Seasons hotel. She’s John Cassevetes‘ daughter, all right — whip-smart, unpretentious, compulsively honest. Posey dropped by for a minute or two early on, wearing a killer black blouse. They were both going to attend an invitational screening of Broken English at the Aero in Santa Monica.
I liked Broken English because it’s often funny but also because it doesn’t seem to be trying to be that as much as a natural settling into a sardonic and sometimes bitterly truthful vein. It’s largely about what a slog it is out there for no-longer-young women who haven’t yet found the right match, or at least a relationship offering a possibility of something fairly good happening. It’s not Rules of the Game or A Man and a Woman, but there are very few times when Broken English merely goes for “cute” or “affecting.”
For what it is and as far as it goes, Broken English (Magnolia, 6.22) is unusually bright and observant, and I swear it contains the most affecting and emotionally open performance of Parker Posey‘s 38-year life. She may seem at times to be doing the same sort of Parker-attitude thing here that she’s done in many films before, but this time there’s a bit more sadness, a deeper crack in her voice, a greater willingness to show her buried child.
All along, her performance works hand-in-hand with Cassevetes’ sassy, tip-top script.
The film gets rolling and digs in when Nora meets Julian (Melvil Poupaud), a 30ish Parisian who seems soulful and straight enough. The chemistry seems right, but then he takes off. Should Nora let it go and move on, or fly to Paris and see what happens next?
In the hands of another director and with a lesser actress as Nora, a vehicle like Broken English might’ve been a little tough to get through. I mean, I usually hate stuff like this. But this one touches bottom, and is sharp and deft and even penetrating at times. I just wish that more romantic comedies were on this level. This isn’t to say it’s great or drop-dead profound, but it’s way beyond your typical puerile, over-baked, too-broad romantic comedy
Justin Theroux, playing a generic egoistic actor with a mohawk, is hilarious. He delivers his lines with just the right jaded aroma, never too broad or buffoony. Drea de Mateo, Gena Rowlands and Peter Bogdanovich also give nicely-honed supporting performances.

I got into it briefly last August, and now someone else — Slate‘s Kim Masters — has focused on “mom-ager” Dina Lohan, the blonde Medusa behind Lindsay Lohan‘s fixin’-to-die tragedy. Mom, who seems an almost pure manifestation of evil, needs to check into a spiritual-rehab facility while her daughter deals with the substance thing. 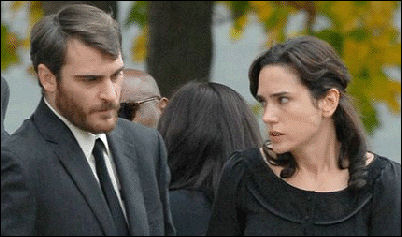 “The next time you see a Hostel: Part II poster, perhaps you’ll ponder for a moment why so many of us get a kick out of movies in which kids are gruesomely hacked to death yet

The L.A. County Sheriff’s department’s decision to release Paris Hilton after a lousy three days is a contemptible joke and utterly shameful. She was sent home after midnight with an ankle bracelet, which she’ll wear for 40 days. A Sheriff’s department spokesperson called it a “reassignment” and mentioned that a “medical” issue had been a factor in the decision to send her home. Medical? The message these LACS chumps have sent to the world is that super-rich ho’s with hot-shot attorneys skate, and that the staffers running the show are political bush-leaguers and totally compliant candy-asses.
Hilton, needless, to add, has completey failed the Robert Mitchum test that I spoke of on May 11th. Mitchum did time quietly and without complaint a following a shady marijuana bust in September 1948, and he came out of it smelling like a stand-up guy. Hilton slithered out of her 23-day sentence like a loftier-than-thou, over-pampered, morally bankrupt reptile.
My 5.11 item included this line: “I don’t think for a second that our very own empty-headed, barren-souled heiress has the character to ‘do a Mitchum,’ but the most potentially profound spiritual experience of her so-far-useless life awaits nonetheless.” I was right, actually — getting herself hustled out of jail after three days has been a profound spiritual experience in the most negative way possible. This is it — Hilton is finished. She had a chance to show some balls and fortitude and has showed she has absolutely none. Which famous woman has been more despised? Leni Reifenstahl?