Two things wrong with Stuart Gordon‘s House of Re-Animator idea, which is about Herbert West bringing Dick Cheney and George Bush back to life with one of his green-liquid injections inside the White House. One, he’s a little late. The movie should be coming out, at the latest, sometime early next year, and Gordon doesn’t even have the financing together. And two, a Bush White House Reanimator movie won’t be worth much in terms of home video revenues because it’ll be totally dated as of January 20, 2009. It should have actually come out last year, or in ’05. Otherwise, it sounds hilarious.

“Walking out of a movie means something,” writes Chicago Tribune critic Michael Phillips. “It means a filmmaker has crossed a personal line in the sand. We ‘ankle,” as the show business publication Variety likes to put it, for different reasons. A walkout’s significance depends largely on the pace of the exit (fleeing in revulsion versus schlumping out, bored beyond recognition) in relation to the crimes up on screen.” I’ll never forgot being bawled out by three or four journos at the Westwood Bruin for walking out on Eight-Legged Freaks. As if I’d done something wrong. Who, today, would stand up for Eight Legged Freaks? Hell, who remembers Eight Legged Freaks?

Transformers will “certainly” make more than $150 million by Sunday night, I’ve been told. This is too depressing to write about at any length. If I could have clapped my hands and turned Transformers into a box-office bust, I would have clapped my hands and said “yeah.” I have this image of a 1500-foot tall statue of Micheal Bay striding Hollywood Blvd. like the Colossus of Rhodes, and then the statue suddenly coming alive with people screaming and cars crashing down below. And then Bay hearing the commotion and looking down and grinning, and then putting his hands on his hips and throwing his head back and going, “Hoo-haw-haw-haw-haw-haw!” — just like the big genie in Alexander Korda‘s The Thief of Baghdad. 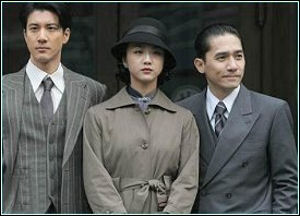 What the copywriter meant to say is that she does a Mata Hari on the guy, having an affair with him as part of a plan to either get information or set him up for a hit….or both. And that things get a little complicated by the fact that she falls in love with him. Ang Lee is a great cinematic painter and we all know it’s the singer not the song, but my God this could be the plot of a Sydney Sheldon novel.

No telling how good Ben Affleck‘s Gone Baby Gone (Miramax, 10.19) may be, but the trailer is very well cut — a solid indication of a pro-level thing. You can sort of tell that Casey Affleck gives a sharp, convincing performance as a Boston-area private dick. Morgan Freeman appears to be doing his excellent usual usual; ditto Michele Monaghan. It feels like this could be Mystic River and then some. You can’t trust feelings and intimations, of course. The proof will be in the pudding, which I presume will be served at the Toronto Film Festival.

A guy in the pipeline of producer J.J. Abrams, currently vacationing in Maine, informs that Cloverfield, the sea-monster movie, will open on 1.18.08.
Abrams is “very active on this one, as he plans to be on all Bad Robot projects,” he says. “The only things he’s been involved with which he hasn’t really had any creative role were What About Brian and Six Degrees — both shows that existed before Bad Robot really opened for business (meaning, when he put the team together).
“Cloverfield is an idea Abrams had over a year ago, which he then sold to Paramount. The point-of-view thing (Handicam) is the whole movie. Scenes from the trailer are in the film. Abrams got a really talented guy (Drew Goddard) to write (they’d worked together on Alias and, presently, Lost), and Matt Reeves to direct (they co-created Felicity and he’s pretty damn genius-level).
“Bad Robot and Paramount will be announcing the real title shortly.”

Paul Giamatti frame capture from the Shoot ‘Em Up trailer. (Thanks to Jason K. Heiser for providing the art.) 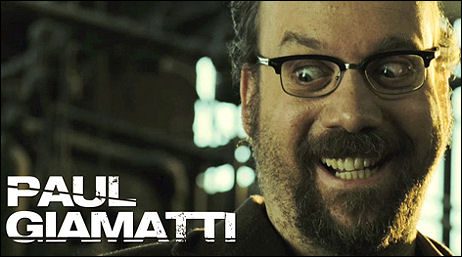 This Shoot ‘Em Up trailer has re-sold me. I was into this film eons ago, but the ardor faded when no trailer turned up for months and months and then when I heard about the extra shooting. Now I’m into it all over again because of Paul Giamatti‘s crazy-villain performance, which looks wonderful. It also seems to slightly de-emphasize the absurdist John Woo gun-ballet aspects.