As he began to make 3:10 to Yuma, director James Mangold “felt that the western had been hurt by a couple of things,” he tells MTV.com’s Josh Horowitz. “One is the over historical epic-ization of the western. The western was never about historical accuracy or teaching a history lesson, not the great ones anyway. They were about character. 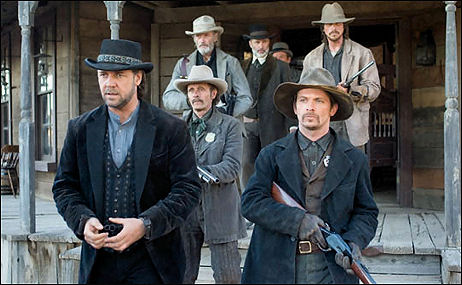 “To my taste, one of the mistakes in westerns I’d seen was this ponderous sweeping Remington painting kind of Western with the big sweeping strings where suddenly I felt it was more about someone getting lost in the idea of making a western than actually making a story about characters living in the west.” Like what? Open Range? The Grey Fox? Wyatt Earp? Unforgiven? Silverado?

“And then there was a post-modern thing where I felt like a lot of westerns had just become tributes to movies. I didn’t arrive on set everyday with a frame blow-up of a Sergio Leone or John Ford movie.

“At a certain point I think it’s incumbent upon you to just let go. Shoot it like George Stevens would shoot it. Shoot it the way John Ford would shoot it which is to say without some kind of compendium of DVDs in your trailer. Just do it. Be in the moment and make the movie. Look at the people and what they’re doing and the sets your friends have built and make the movie. That to me was the critical mental adjustment I wanted to make.”

Nikki Finke reported yesterday that Paramount/DreamWorks’ recent decision to sever ties with Blu-ray and go with HD-DVD for their high-def titles was basically driven by “cash grabs” — $50 million to Paramount and $100 million to DreamWorks for “promotional consideration.”

I thought Blu-ray had basically won the format war, especially with the Playstation 3 advantage it’s had with gamers in recent months. It’s still ahead in terms of either exclusive or bipolar studio support (Disney, Fox, Warner, Sony, Lionsgate and MGM). Now Paramount has joined Universal in being exclusively HD-DVD. And the consumers who half-care about this situation are throwing up their hands. I don’t care at all. Nobody cares deep down. Especially given that neither format is “going to become the next platform,” in the words of DreamWorks honcho Jeffrey Katzenberg.

In a thoughtful, well-composed but slightly obsequious Reeler piece about his recent experience as a N.Y. Film Festival juror, L.A. Weekly critic Scott Foundas quotes Thierry Fremaux, the artistic honcho of the Cannes Film Festival, for a concise explanation of what festival programming is basically about. “The point of this job is not to say ‘I like’ or ‘I don’t like,'” Fremaux says. “My job is to say, ‘Do we have to screen this film or not?’ Maybe I don’t like a film, but I think I have to show it. Maybe I like a film, but I’m not sure that we have to show it.”

Well and good, but how does this square with the Cannes Film Festival having turned down The Lives of Others? By Fremaux’s own words, it is fair to infer that however he and the ’06 Cannes jurors personally felt about Florian Henckel von Donnersmarck‘s deeply moving, stunningly well-directed film — an emotional and political bulls-eye with three world-class performances — they finally decided it wasn’t important or essential enough to show at Cannes.

I don’t know the backstory (was Others given the shaft because it had already shown at the Berlin Film Festival in March of that year?) but if Fremaux & friends turned it down because it wasn’t strong or attention-getting enough, then that decision would fall under the heading of “borderline loony.”

I seriously doubt that “importance” is a universally adhered-to criteria among jurors selecting a film for a festival. The first two reasons are always the quality of the film and the resume of the director (and particularly his/her past history with the festival), and sometimes vice versa. The others are (a) having a film first (i.e, territoriality), (b) a juror hating a particular film with a passion (i.e., a female N.Y. Film Festival juror reputedly hated Amelie when it was screened in ’01), (c) the political needs and forthcoming release strategies of the producers, and (d) other side political issues.

Gambling is an addiction — a high-dive fever trip that people with wired, aggressive natures enjoy because (and I’m not trying to be facile or judgmental about this) it offers a brief respite from the dutiful, methodical, nose-to-the-grindstone rigors that are necessary in order to lead a life defined by at least some degree of honor, dignity, consistency, responsibility and consideration for others. Gambling is, I’ve always believed, about tempting disaster and flirting with self-destruction. It can take you down as surely as alcohol or cocaine or debt or anger. But there’s still something about it that I like.

The willingness or at least the readiness to gamble is, of course, a necessary element with any creative person who dreams of making it big, and certainly with any producer or screenwriter or director. It’s been said over and over that the lack of hot gambler nerve is what ails the film business more than anything else these days. You can’t hedge or calculate your way into a hit movie. The biggest Hollywood cliche of all is that movies are a crap shoot, but over the last 25 years or so the purse strings have become increasingly constricted by more and more nervous-nelly corporate types, which has often been a key factor in bad big-studio movies and the much-bemoaned corporate addiction (unfortunately necessary within the realm that big studios are obliged to operate) to franchises.

The vast majority of creative people in this town are not problematic casino gamblers, although a lot of them are in regular poker games with industry friends. I know a few actors and at least two director-writers who enjoy playing the tables in Las Vegas and Atlantic City, but I wonder if anyone has ever written a piece about the overlap between gamblers of whatever delineation and the type of films they tend to dream up or pitch or try to make?

Gambling addicts are people looking to lose, but is there something in the character of people who, under the right circumstances and with the right idea or inspiration, have the brass to throw the dice on a script or a concept that has a tendency to spill over into Vegas-y gambling (or horses or dogs) to some extent? All the legendary producers have been tenacious with thick skins, but don’t you also need a little of that “crazy guy still playing craps downstairs at 4 ayem” spirit?

I’ve never been into gambling of any kind. I’ve played in less than ten serious poker games in my entire life. I hate losing money. But there’s something about that side of my nature that has also led, I suspect, to not having had the brass or the drive to push harder at other ventures like scriptwriting (which I tried and failed at, possibly because I didn’t have the talent but also because I may have lacked the moxie to keep at it and theoretically improve as I went along). I’m very happy with what I do, but deep down I’ve always admired the gamblers, or at least the thing they have that leads them to an occasional belief, as James Caan‘s character puts it in James Toback‘s The Gambler, that “two plus two equals five.” 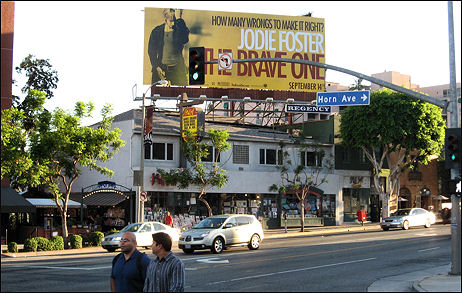 “He is everyone, he is no one.” The trailer for Todd Haynes‘ I’m Not There (Weinstein Co., 11.21) is up at IGN, although you’ll have to watch a U.S. Army recruitment ad first. Here’s a non-Army recruitment version. “All I can do is be me. Whoever that is.”

This is last week’s news, but are you going to tell me that Time‘s layout editor didn’t say to himself (or herself), “Hey, devil horns! Nobody can prove malice on our part — we can just say they’re paranoid — and it’ll sort of fun to piss off the religious-right nut fringe.” 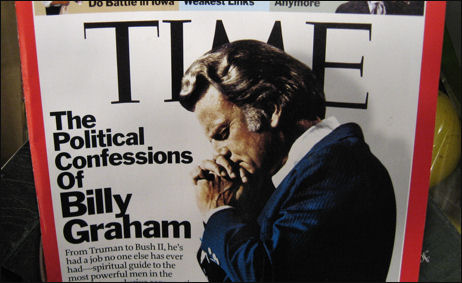 Postnote: HE reader “SaveFarris” pointed out a while ago that Time did this before to Bill Clinton, with a link to prove it. 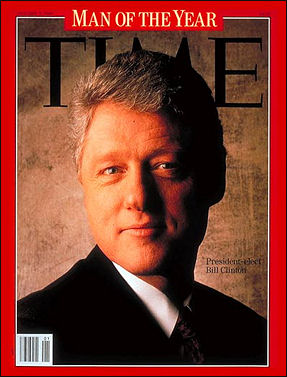