Toronto Film Festival press screenings begin tomorrow morning. I’d like this to not mean slightly spottier, catch-as-catch-can HE coverage for the next eight or nine days, but the syndrome is the syndrome. It’s next to impossible to write at length or with much depth when you’ve got an hour or 90 minutes between screenings and all kinds of interviews, press conferences and parties to wedge in besides. Tomorrow’s films at a glance: Faith Aken‘s The Edge of Heaven, Ang Lee‘s Lust, Caution, Martin Gero‘s Young People Fucking, Michael Moore‘s Captain Mike Across America.

Slate‘s Kim Masters has reported about friction between Russell Crowe and Lionsgate marketers over the release date of 3:10 to Yuma, as well as delays that may have affected the slant and tone of the aarly one-sheets.

Crowe wanted Yuma delayed until ’08, she reports, because he wanted the fall season free and clear for the opening of American Gangster, which opens on 11.2. (Masters is hearing Universal will fund a Best Supporting Actor campaign for Crowe’s performance in that film). But Lionsgate decided to bring out Yuma on 9.7 (two days hence) in order to beat another big western, The Assassination of Jesse James by the Coward Robert Ford, to the punch.

But “once Lionsgate moved the date, everything had to be done in a hurry,” Masters writes. “Crowe was given an unusually small selection of photos to approve for the poster and rejected all of them.” (One of Masters’ sources says “he thought they made him look fat.” Has anyone taken a gander at those recent videos of Crowe doing Yuma interviews? He’s really packed it on.). “But those on his side say the studio didn’t offer enough choices and Crowe was merely exercising a routine movie-star prerogative. Finally, an acceptable option was proffered.”

Could this be the reason why Lionsgate went with those leather-coated-dandy one-sheets early on?

“But Mangold [and his team] apparently were fuming that Lionsgate left them out of the loop on various decisions,” Masters writes. (What decisions? The gay campaign?) “‘They’ve had a big-studio experience with Walk the Line — they know what it means to be included in the process,’ says a source inside the situation. ‘And Lionsgate isn’t used to dealing with filmmakers like that.’

Lionsgate, says this person, “is very comfortable drawing young men to Eli Roth movies, but not with bringing along a more mature movie like 3:10 to Yuma. Ortenberg counters that the 3:10 to Yuma campaign ‘will go down as one of the best of the year.'”

I was generally pleased with James Mangold‘s 3:10 to Yuma after seeing it the first time, although I had issues and irritations here and there. Then I saw it a second time and those little gnarlies grew on me. And yet I still “liked” it well enough. It’s a moderately decent, straight-up western with a terrific second act and top-notch perfs from Russell Crowe and Christian Bale. And a popular reception seems assured with the current 87% Rotten Tomatoes rating and the 90% positive responses to last Sunday’s sneak. 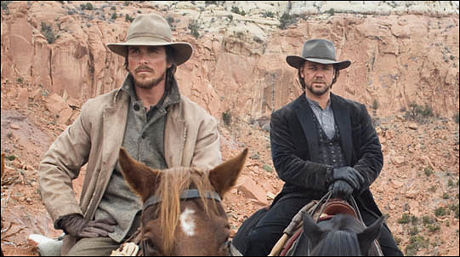 In fact, there’s such a thumbs-up Yuma consensus that I now feel free to rag on it some. I’ve already mentioned Ben Foster‘s hugely annoying mad-dog villain, and I’ve griped about that ridiculous bit at the end with Crowe’s horse hearing that whistle despite the loudly chugging train engine and subsequently galloping alongside the train in order to…what? Follow the shackled Crowe all the way to Yuma prison and then graze outside the prison walls for a few weeks or months while he plots his third escape?

My other beefs (and let’s get the spoiler warning out of the way right now) are, in no particular order…

* For me, there’s no sense of actors reading lines and giving attention-seeking, strutting-around performances in The Assassination of Jesse James by the Coward Robert Ford (although they were obviously working from a script or plan of some kind), but I felt assaulted — “pecked” is a better word — by actory business all though 3:10 to Yuma, including Crowe’s. (His charisma makes it work.) I just never got around the feeling that I was watching paid actors dressed in western gear and covered in makeup that makes them look as if they haven’t bathed in several weeks. Is what I’m saying analogous to David Denby‘s thought as he watched Cameron Crowe‘s Elizabethtown that he could hear film running through the projector gate? On some level, yes.

* Why give Bale’s “Dan Evans” character a wooden peg leg? It doesn’t pay off or figure significantly in the action, and there’s only one brief shot in which we’re shown a glimpse of it (i.e., after he’s been knocked to the ground during the barn-burning scene). I didn’t need it, and neither did Bale. His character is beaten-down enough at the beginning for other reasons.

* Bale looks at that locket or trinket — each time with an insert shot — at least four times during the film. (It might even be five.) Twice would have been okay. I got irritated when he did it the third time, and the fourth time was, like, “C’mon!” 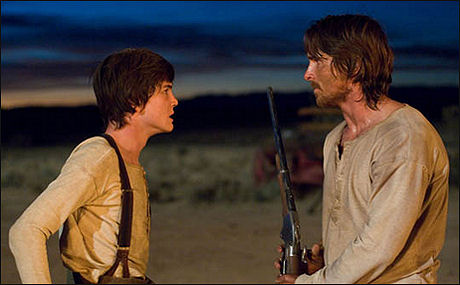 * I was deeply irritated at Kevin Durand‘s “Tucker” character, and particularly Mangold’s reluctance to rein him in. At least his standard-issue sadist scumbag performance pays off when Crowe stabs him to death in the neck with a fork…yes! This is one reason I like the second act as much as I do.

* The press notes explain that Mangold had a snow issue as he shot the climactic shoot-put scene in the town of Contention. You can see snow in the distance in a few shots — sometimes blanketed, sometimes with spotty patches. And yet the streets of Contention are pure brown because Mangold made a decision to bring in truckloads of soil to make everything nice and uniform. Except snow is a lot more visually interesting than dirt. If I’d directed I would have brought in snow machines instead. A picky-ass thing to bitch about, I realize.

* Why does Crowe decide to seduce Vinessa Shaw‘s barkeep character in that early, post-stagecoach robbery scene when he knows it’s dangerous to hang around? Foster and the other gang members, who take off on their own, are obviously aware of the risk, but Crowe can’t be bothered. It just seems like a lazy and stupid thing to do. Crowe’s attitude (i.e., not his “Ben Wade” character’s) seems to be, “Well, she’s definitely pretty and receptive and I know I can nail her despite my stinky whisky breath. My confidence is based upon two factors — one, I’m Russell Crowe and two, if I don’t get caught there won’t be any story about putting me on the 3:10 to Yuma, so it’s a nice way to spend time until the lawmen get here.”

A more satisfying way to go would have been Crowe trying do her quickly, but with Shaw going cold on the idea because she’s not being treated like a lady and a seduction tension starting up between them — “It’s not like you’re not the most beautiful woman I’ve seen in these parts — you are — but the law’s on my tail and I value my freedom” — and while this is happening the law busts in anyway and grabs him. This I would have been cool with.

5 Comments
Gone With the Woman

“As a regular reader from Norway, I’d like to open your eyes towards a TIFF screening from my home country. I know you’ve fought the good cause for Mozart and the Whale, but you should know Its Norwegian director Petter Naess (also nominated for Elling back in ’02) hasn’t been sitting still. His new feature Gone with the Woman is having its out-of-country premiere at Toronto, and yesterday it was chosen as Norway’s Best Foreign Film entry for the Oscars. 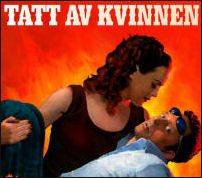 At my recently launched English-language film blog, Subtitles to Cinema, I’ve just published a riff about Gone with the Woman — check it out if you’re interested.” — Karsten Meinich

London’s Daily Mail has a very cool and clean Valkyrie group shot of the actors playing the anti-Hitler conspirators along with corresponding pics and brief descriptions of each real-life conspirator. It’s good to see Stamp, Nighy and Branagh among Cruise’s allies. The MGM (via United Artists) release of Bryan Singer‘s film is set for 6.27.08. 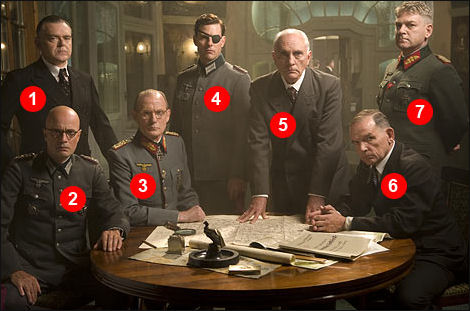 If you go looking for Time‘s pre-Toronto Film Festival coverage online you’ll have to dig, dig, dig, dig, dig, dig, dig, dig (like the Seven Dwarfs in the diamond mine), which is strange considering that the TIFF is on the cover of Time‘s Canadian print edition. But the stories, written last week by Richard Corliss, Susan Catto and Rebecca Winters-Keegan are there — one about the hot tickets, one about TIFF co-chiefs Piers Handling and Noah Cowan, one about three local TIFF junkies.

In the opening graph of the Handling-Cowan profile, Corliss writes that “you know your film festival is a hit when people nearly kill each other to get into the screening of a movie they couldn’t be paid to see elsewhere. At last year’s Toronto International Film Festival, that film was the British docudrama Death of a President, which imagined the assassination of George W. Bush and the tracking of his killer. Outside the theater, people begged to get in as if it were the one and only Beatles reunion. Yet when the film opened in North America a month later, it earned just $519,086. No matter, at least to festival junkies. Toronto — TIFF to its fans — had chalked up another sensation.”

Well, c’mon…the struggle to catch every film at just about any film festival has the same after-residue. It is hugely important to get into a film (and sometimes it actuallly is), but when I don’t get there in time and I can’t wangle my way in, I calm myself down by saying that nine months from now, the film I’m trying to see will be on the shelf at Lazer Blazer…and chances are I’ll rent something else when I come across it.

The response I’ve gotten is that the movie is incredibly violent,” Eastern Promises director David Cronenberg tells critic Amy Taubin. “And I keep saying, ‘Did you see The Departed? The body count there and the brains all over the wall?’ But some people seem to feel that this movie is more violent than The Departed. So then, what are you talking about? You’re not talking about how many incidents, because The Departed has dozens and we have four. Somehow, it’s the close-up, the intensity, the carrying-through.” (from the current issue of Film Comment.)