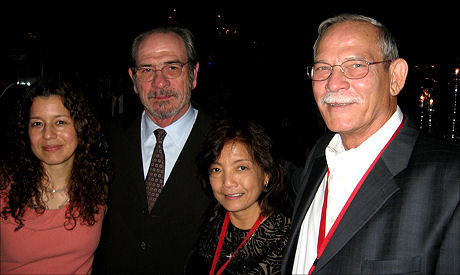 Woody Allen‘s Cassandra’s Dream (Weinstein Co., 11.30) plays a lot tighter and stronger than I’d been led to expect by the pans (particularly the one from Variety‘s Derek Elley) coming out of the Venice Film Festival. It’s not Match Point-level, particularly regarding the ending, but it’s a straight, well-acted tragedy piece that struck me as unpretentious, believable and fat-free.

I was especially impressed with Ewan McGregor and Colin Farrell‘s portrayals of working-class brothers who get into a horrible financial bind and are pretty much forced (or so it seems from their perspective) to commit murder, which of course only leads to darker, more enveloping states of mind. Farrell’s performance as a weak (certainly vulnerable) fellow with a gambling addiction is particularly gripping.

I have to pack up and get in line for Paul Schrader‘s The Walker (showing at 9:30 pm), but Cassandra’s Dream, for my money, is a solid, mid-level Woody.

HE reader Lois Steinberg has offered her two cents on the ending to 3:10 to Yuma, particularly as she thinks others on this site “may have missed the point.” I’ve edited the fat out and rescrambled a bit, but she’s reading the finale pretty much the way director James Mangold explained it me a few weeks back:

“After the Wade gang takes over the stage with the loot, it turns out one of the marshalls is still alive and grabs one of Wade’s men and threatens to kill him if the gang doesn’t put down their guns,” she begins. “Wade (Russell Crowe) tells him (although he’s really addressing the entire gang) that his guy screwed up, was sloppy and put them all at risk…and shoots him in the neck. That’s what happens if you screw up by not doing what he says.

“I think at the end he sees that Charlie (Vince Foster) and his gang are out of control. Their paying the townspeople to shoot Wade’s captors has turned to chaos and he is at as much risk as Dan (Christina Bale). Charlie doesn’t just shoot Dan once, but again and again, not waiting for word from his boss.

“Wade is the puppet master, and he doesn’t like that the situation got out of his control. So he totally cleans house.
I don’t think the ending means Wade had a change of heart. He just wanted a new staff.

“Dan knew he wasn’t going to make it, though like many in today’s world he was too willing to see people through rose-colored glasses of their own values.

“Wade kept telling both Dan and his son he was no good. He just had his preferences and as long as he called the shots and had control, he could be be…well, not so much ‘kind’ as, for a moment, not a killer.”

Indiewire is reporting that Warner Independent has picked up Alan Ball‘s controversial Nothing is Private, which I favorably reviewed yesterday. That said, I’ve spoken to journo and industry folk who really hate it. When I told one of the haters (a woman) last night that I respected and admired it, she went “are you crazy?” She said she was greatly bothered by the young-girl sexual stuff. I replied that she’s probably more bothered by it than a typical 13 year-old girl would be.

Anyone who says Todd Haynes‘ I’m Not There (Weinstein Co., 11.21) isn’t an essential film to see — not just for the portions that “deliver” but the ones that are radiantly, eye-poppingly alive — is operating without the DNA of a true movie lover…it’s that simple. This is a great poetry-weave film, a reanimation of ’60s spiritual-cultural energy like no feature I can recall, and a magnificent head-tease that is always arresting, even during the fumble portions. 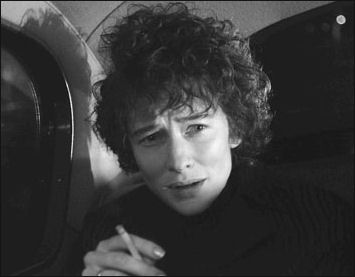 Cate Blanchett in I’m Not There

It’s not all-the-way fantastic (20% or 30% drags and meanders and sometimes confounds), but I’m saying for sure that you can’t not see it. You can blow it off when it opens theatrically and wait for the DVD, sure, but this will probably incur the suspicion of trusted friends and colleagues. Honestly, do you want that?

I knew Haynes had taken a huge bite going in with this ultra-ambitious patchwork exploration of Bob Dylan‘s life and legend (spanning from the late ’50s to late ’60s), in which he uses six different actors (Cate Blanchett, Christian Bale, Carl Franklin, Richard Gere, Heath Ledger and Ben Whishaw) along with numerous styles and palettes to convey various aspects of this unique life and legend.

What I didn’t anticipate was his impressive use of montage that ties together the various strands and makes a kind of harmony out of what could have been serious chaos. Nor did I expect the magnificent detail in each frame, the always-brisk pacing and the sheer “fun” aspect.

An example of the latter is a Dylan-frolics-with-the-Beatles-in-”64 moment that’s absolutely hilarious in a kind of of Jacques Tati-meets-Charlie Chaplin-meets A Hard Day’s Night sense. 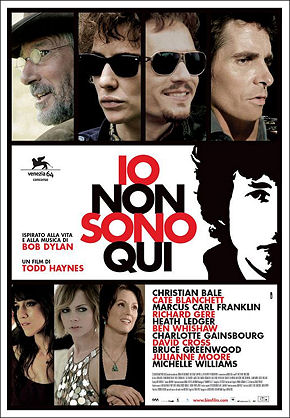 Did I mention this is Haynes’ absolute best film? That he’s pulled off one of the most exciting growth-surge displays of any directorial career, ever?

I’d heard from a friend at Telluride that I’m Not There is “an inside joke for Dylanologists” and okay, yeah, it is that…but for anyone open to full-crank cinematic stimulation it’s one of the most inventive and dazzling head-trip films I’ve ever seen. I went into it this afternoon with some trepidation, and then realized within minutes it would be much, much better than anticipated. It doesn’t really have much of a “thread” (by the classic definition of that term) and it loses tension from time to time, but when it’s “on” and rolling full steam it’s a wild-ass thing to behold.

On top of which it has to be seen for Blanchett’s knockout performance (captured entirely in black and white) as the Highway 61 Revisited/Blonde on Blonde Dylan. Forget Cate’s game performance in the catastrophic Elizabeth: The Golden Age and absolutely count on the fact that she’ll be nominated for Best Supporting Actress in the Haynes pic. Dylan fans are going to be blown away, but I can see others digging it as one of the best woman-playing-a man tour de forces ever put to film.

On one level her inhabiting of the ’65-to-’66 Dylan doesn’t feel entirely sincere — it’s a piece of performance art that feels a wee bit put-onny — but another level it’s psychologically “real” and shattering. For me Blanchett delivers as much of a knockout punch as Marion Cotillard‘s Edith Piaf does in La Vie en Rose or Jamie Foxx did in Ray, and perhaps even more so. 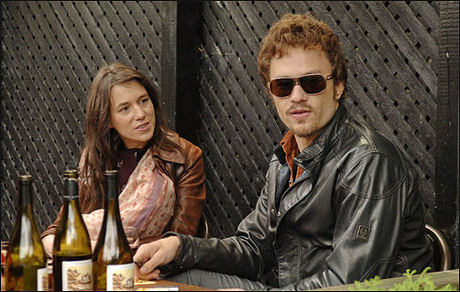 I’m speaking about much more than a physical capturing — the frizzy big hair, black shades, tight pants, Beatle boots and whatnot — or Blanchett’s spot-on imitation of his mumbly voice and guarded manner. I’m talking mainly about a convincing communion with that Dylan-esque otherness…that sense of odd, connected whimsy and all-knowing, tapped-in power that indicated all kinds of fascinating currents in the actual guy.

Yes, the Gere-in-the-country portion (a chapter evoking the reclusive John Wesley Harding/New Morning era) slows things down a bit, but even this section has its odd carnival-like charms. I’ll admit I was feeling a wee bit anxious and impatient, but Haynes saves it somewhat by cutting back to the Blanchett, Ledger, Bale and Whishaw portions now and then and thereby creating a welcome whatever-ness that at least staves off boredom.

Will those who’ve never listened to a Dylan album or seen Martin Scorsese‘s masterful No Direction Home be able to get into this film? Probably not, but the Dylan-deprived aren’t going to see it in the first place so the question is moot.

I felt alive and tingly as I walked down Bloor Street after seeing this film early this afternoon. I was saying to myself “this is what it feels like to feel charged up by a movie, by transcendent thought, by ravishing lyrics…by the whole magilla.” 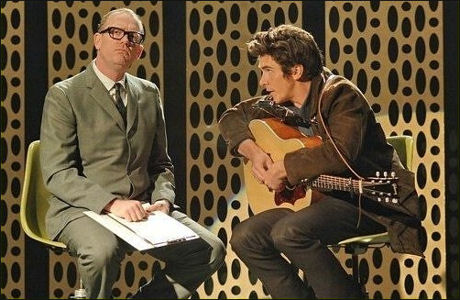 The ten lamest-sounding MPAA rationales for slapping this or that film with a PG-13 or an R or whatever, as compliled by the team at All Movie Guide. 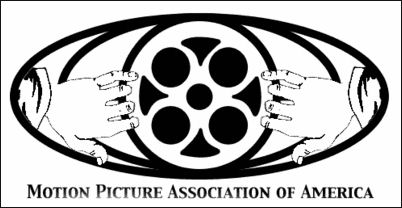 Another full day today — Woody Allen‘s Cassandra’s Dream 25 minutes from now, something essential at 11:30 or thereabouts (can’t find my calendar), an interview with the director of Trumbo around 3 or 4, Brian DePalma‘s Redacted at 5:15 pm. Two parties last night — one at Casa Loma for In The Valley of Elah that began at 9 pm, and one that started two hours later for Atonement. Burning the wick at both ends will obviously get you sooner or later.