For years the once-great Carroll Ballard (The Black Stallion, Duma, Never Cry Wolf) has been tagged as the go-to guy when you’re making a spiritual-poetic animal movie, so it was no surprise when he was hired to direct Hachiko: A Dog’s Story, a feature that will star and be produced by Richard Gere. Also produced by Vicki Shigekuni Wong, it’s based on a true-life Japanese legend about of a college professor’s bond with the abandoned dog he takes into his home.

The problem is that Ballard wound up butting heads with Gere and, according to a trusted source, walked off the shoot last week just 21 days before the start of principal photography. The informer says it was “apparently due to creative differences with Gere over the film’s ending.” People on the production have told him that Ballard “was acting strange and cantankerous,” and that the producers are scrambling right now to find someone to come in and take over “while the production team sits up in Rhode Island twiddling their thumbs.”

The source has read Stephen Lindsey‘s script and calls it “good, but it needs a strong sensitivity that won’t come easily with a director just dropping in at the last minute. “

I can’t remember the last time I saw a fiery volcano explode in a film, but we know we won’t be seeing one from Roman Polanski any time soon with the plug recently pulled on his Pompeii movie. But look at this — a real-life volcano blowing fire and fury just hours ago about 130 kilometers off the coast of Yemen. I can only hope for a YouTube video down the road. It looks like the fire-breathing monster effect in the trailer for J.J. Abrams’ Cloverfield. 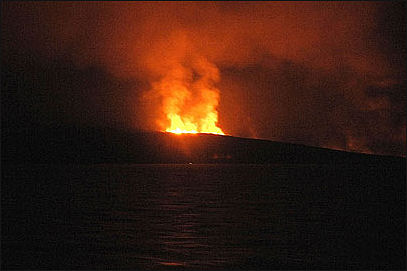 A better-than-ILM display of fire, lava and massive ash clouds following an actual volcano eruption on a Red Sea island off the coast of Yemen, in this photo taken from the deck of the Canadian frigate HMCS Toronto.

The story was filed this morning by the Toronto Star.

Every time I read a story about certain political forces wanting smoking in Hollywood movies to be restricted or stopped, which is the topic of this Michael Cieply story in the 9.30 N.Y. Times, I have the same reaction. Europeans, people under heavy stress, 20-something clubgoers and low-rent rubes often smoke cigarettes, and as offensive as this habit can seem to ex-smokers like myself it’s absurd to say that filmmakers shouldn’t show people sucking smoke into their lungs when it’s appropriate for the story or theme they’re trying to convey.

And yet it wouldn’t be bad to see less movie-smoking as a general rule. Actors would be forced to do lean on some other tic or mannerism — it would push them to be more creative.

7 Comments
“Valkyrie” for sure

I was reading Jennifer Pearson‘s Tomkat cover story (“Tom and Katie’s Big Blow-up!”) in the latest Star in the checkout line at Gelson’s last night, and was startled to read that Valkyrie, Bryan Singer and Tom Cruise‘s still-shooting WWII thriller, is now being called Rubicon. That’s dead wrong, I found out. I just want to clarify that in case anyone else reads this Star story over the next three or four days and goes “whoa” when they read this.

I called Pearson and her Florida-based editor, Larry Brown, to see what the source was, but Brown dummied up and Pearson said the Rubicon title was inserted into the story by a news editor in the Star‘s Manhattan editorial offices. MGM publicist Dennis Rice wasn’t in (he’s in Berlin) but Allan Mayer of 42 West, who represents MGM and/or Valkyrie, said the Star “got it wrong,” that the film’s title is definitely Valkyrie and that Rubicon is an old boilerplate title that was never officially used.

As this trailer proves, the voice that Daniel Day Lewis uses in There Will Be Blood (Paramount Vantage, 12.26) doesn’t resemble his Gangs of New York/ “Bill the Butcher” voice in the least. Anyone who says this has no ear. It’s actually a blend of two voices — the late John Huston‘s and ThinkFilm honcho Mark Urman‘s. Huston + Urman + a little raspiness + a measured, conniving quality.

This out-of-synch Bill Maher riff about Hilary vs. Rudy on Larry King Live was taped six weeks ago, but the situation hasn’t changed. Knowing deep down that Maher is almost certainly right is enough to give anyone indigestion. Obama vs. Thompson would have been an interesting race, but Hilary vs. Rudy is going to be the smelliest campaign in human history. I can’t believe it’s come down to this. It’s so dispiriting…God.

34 Comments
The End of the World

A portion of the only first-rate scene in an otherwise dated and often irritating film, especially due to some horribly banal dialogue and some truly atrocious acting by some child actors. 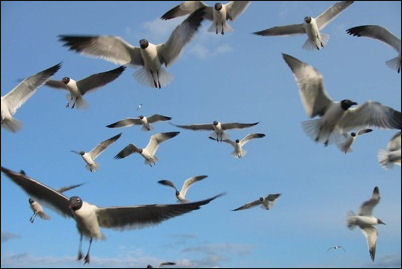