It’s going to be neck-and-neck between the reportedly painful Fred Claus — 77, 37 and 14 — and American Gangster if it only drops 40% or so, which could happen given the good word-of-mouth. They’re both likely to reach the mid 20s, although Claus could be closer to $30 million depending on the kid turnout. Lions for Lambs — 69, 28 and 8 — is getting most of its support from the over 30 crowd. It will be lucky to reach $10 million.

“One year from now…” 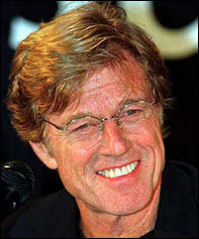 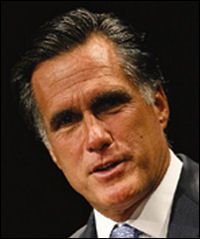 It’s starting to be a common view that the qualities that help a candidate win the Democratic presidential nomination are the same qualities that don’t necessarily play in Redville in the general election. After Kerry lost in ’04 I told a friend that the next Democratic candidate is going to have to “bubba up” to win. Today the stats seem to suggest that Barack Obama, who reportedly only has about 25% of likely Democratic primary-voter support, does better with the conservatives than Hillary Clinton probably will in the big election next fall. The Republicans are wetting themselves over the prospect of attacking Clinton starting in the spring.

“Among Democrats, Hillary Rodham Clinton‘s formidable standing — 50% of Democrats and Democratic-leaning independents are supporting her — is unshaken despite escalating criticism by her rivals and disappointing reviews of her performance at last week’s debate,” says an 11.8 USA Today story by Susan Page.

“But she has significant vulnerabilities,” Page writes. “Her unfavorable rating, 45%, is a dozen points higher than that of any other contender.”

Another 11.8 USA Today piece, this one by Jill Lawrence, reports that “more than eight in 10 Republicans and more than half the married men in a new USA TODAY/Gallup Poll say they definitely wouldn’t vote for Hillary Rodham Clinton for president.”

A friend of Pixar animation chief John Lasseter has written to say Lasseter has no axe to grind against Beowulf, and that Beowulf director Robert Zemeckis is “on the record having said that Beowulf was not animation…anyone can be mislead by the mixed signals from that camp.”

He also claims that “a former Sony exec called to express shock that the academy said it was animation, as he’d worked there when the company developed it, he’s seen it, and can’t believe it is animation, which means frame-by-frame technology, which includes puppets, stop motion, etc.”

“Puppets” and “stop-motion” were animation or special effects tools that were first used in the 1920s by Merian C. Cooper and Lewis O’Brien, and later in the 1950s by Ray Harryhausen. “Frame by frame” harkens back to the days of hand-pointed animation cells created by the Disney guys for Bambi and Snow White and the Seven Dwarfs. Due respect, but these are antiquated terms. The digitally animated realities of 2007 cinema exists in a different realm. It is no country for old men.

I’ve been told by two good sources that Lasseter has been against the idea of Beowulf being classified as animated, and this “friend” hasn’t disputed this. And there is no sensible explanation for Zemeckis saying it’s not animated. It’s looney of him to take this position. I’ve seen the film and it’s not live action…please. The fact that it began with actors emoting in front of green screens is only one component in a very sophisticated visual scheme.

Politico.com’s Jeffrey Ressner and Ben Smith reported last night that California Gov. Arnold Schwarzenegger has “spoken” to opposing sides in the WGA strike situation and “has had staff members reach out to both sides, as well as to the federal mediator trying to get them to hammer out a deal about future residuals and other issues.”

Ressner-Smith also repeated a Deadline Hollywod Daily report that “an e-mail [has] made the rounds intimating that an ‘ex-president'” — Bill Clinton? Jimmy Carter? — “has offered to serve as a buffer between the two sides.”

Director Guillermo del Toro has alternated fanboy movies (the Hellboy flicks, Blade II, Mimic) with adult-level dramatic spookers (Pan’s Labyrinth, The Devil’s Backbone, Chronos). But it appears that his next film, a sci-fi thriller called Champions, which he’ll direct, write and produce for Tom Cruise and Paula Wagner‘s United Artists, is a departure. The material is based on a late ’60s British TV series about government agents “who are rescued from a plane crash by an advanced civilization and given superhuman abilities,” according to an 11.7 Variety story by Tatiana Siegel.

For the time being, it’s probably best to hold up on whatever excitement you may be feeling over the re-teaming of Al Pacino and Robert De Niro in Righteous Kill, which Overture Films will bring out sometime next year. 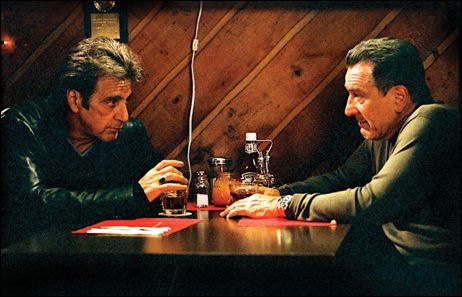 The first concern is the fact the director is Jon Avnet, whose previous films include Red Corner, Up Close & Personal and The War. None of these films were hugely flawed, exactly, but I don’t recall anyone doing cartwheels or back-flips over their quality when they first came out. (The late production designer Richard Sylbert worked with Avnet on Red Corner, and he told me lots of stories.)

The Avnet factor is mitigated, I’ll admit, by the fact that Inside Man‘s Russell Gewirtz has written the Righteous Kill script.

The second concern is that Pacino and De Niro are both going through that gradual downward swirl phase that many big-name actors start to experience when they hit their 60s. Because they’re less in demand at this age they tend to appear in films that they wouldn’t have considered in their prime. Pacino, especially, has been on a fallow streak lately, his last three films being the underwhelming Ocean’s Thirteen, the barely noticed 88 Minutes (also directed by Avnet), and the moderately awful Two for the Money. The last decent performance he gave was his “Roy Cohn” in Angels Over America four years ago.

62 Comments
Rat vs. the dragon slayer

Beowulf has been approved by the Academy’s animation committee as one of the twelve animated features eligible for the Best Animated Feature Oscar! I’ve confirmed this twice with an Academy spokesperson…amazing news! Robert Zemeckis, Roger Avary and Neil Gaiman‘s film now stands an excellent chance of taking the prize because it’s such an eye-filling mind-blower — a truly revolutionary step in the delivery of 3D thrills and animated envelope-pushing. 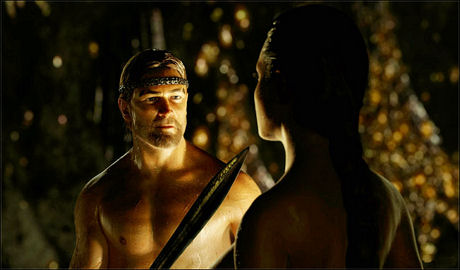 What this decision really means is that it’s now down to a contest between Beowulf (emblematic of the new realms and wonders of mo-cap digital animation that are now upon us) and Ratatouille (a perfectly respectable and in fact beautifully rendered example of ’90s style animation). What makes this extra significant is that one of the old-guard voices who opposed Beowulf‘s Oscar- qualification is Pixar animation chief John Lasseter, who executive-produced Ratatouille.

So it’s a mano e mano between the rat vs. the dragon slayer. And as much as I hate to say it, given how touching, beautifully written and superbly made as Ratatouille is, HE feels that the rat needs to lose.

Not because it lacks anything as a film (far from it), but because Lasseter needs to be slapped around for trying to impede the forces of the brave new digital world. Let this be a lesson to all older fuddy-duds everywhere. If you try and block or discredit the new thing (whatever that thing may be), you are inviting the wrath of the forward thinkers of the world, and you may pay a price for this.

The other qualified titles are Alvin and the Chipmunks (semi-qualified pending viewing by the committee), Aqua Teen Hunger Force Colon Movie Film for Theaters, Bee Movie, Meet the Robinsons, Persepolis, Shrek the Third, The Simpsons Movie, Surf’s Up, Tekkonkinkreet and TMNT.

As I wrote to Beowulf producer-writer Roger Avary last week, “[Your] film is obviously animated through and through. It deserves the Best Feature Animation Oscar, bar none. I don’t care what anyone says — this is not live-action except in the most rudimentary sense of the physical acting aspects, which represent, in my view, a relatively small portion of the whole.” 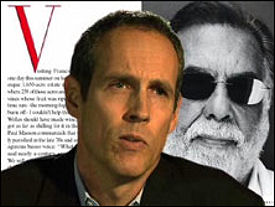 “But you can be satisfied, you can be happy you did that,” Coppola explains, because having kids like this is “better than kids who are hanging around, sort of dependent on you or something. My kids are not like that.”

Coppola’s wife Eleanor, he says, “always tells me that, because I lament, ‘Where are my kids? Where are my grandkids?’ And my wife says, ‘Well, you gave them a wonderful thing. Aside from everything else you’ve given them, you’ve given them the livelihood that they can go and pursue their own lives.'”

Youth Without Youth is having its first press screening tonight. I’dd like to attend, of course — it’s Coppola, after all, and a long-awaited effort — but the reviews out of the Rome Film Festival have been dispiriting, to say the least. Not to mention the general “forget it” buzz that I’ve been hearing since last spring. The result is that I’m looking for ways to avoid seeing it. There is only one film I’d rather see less, and that’s Love in the Time of Cholera. Is that a fair-minded way of looking at things? No, but it’s the honest truth.

The only thing that scares me about Roman Polanski‘s intention to direct an adaptation of Robert Harris‘s “The Ghost“, a just-published political thriller, is a statement given to Variety‘s Tatiana Siegel by Harris that “most of the story takes place in an oceanfront house during the middle of winter,” which Harris called “classic Polanski territory.”

What Harris means, I suspect, is that an oceanfront home is precisely the same kind of setting Polanski used in Death and the Maiden (1994), a well-written parlor drama that ranks in everyone’s memory as a respectable but middling, and even a touch boring. Note to Polanski and Harris: minimize the oceanfront home scenes and take the story elsewhere. I don’t care if it’s a bathroom in a freeway pit-stop gas station — just don’t resuscitate Death and the Maiden….please!

The Amazon description of Harris’s book: “Adam Lang [read: Tony Blair] has been Britain’s longest-serving and most controversial prime minister of the last half century. And now that he’s left office, he’s accepted one of history’s largest cash advances to compose a tell-all (or at least, tell-some) memoir of his life and years of power.

An Amnazon reader reports that “the primary setting for ‘The Ghost’ is Martha’s Vineyard in the winter.”