Support on Patreon Follow @wellshwood
42 Comments
Kent on “No Country”

A quick little chime in from HE reader James Kent on No Country For Old Men and the whole funny ending thing: “I saw it this past weekend and it’s a great film. And you are spot on — it is one of those movies you can’t emerge from and talk about right away. You need a couple of hours to digest the thing. Did I love the ending? No. But does that diminish the love I have for the film? Absolutely not.

“Look, if the Brothers Coen had found a different way to resolve the film in some awesome, slam-bang way…who knows? Maybe it would have a more short-term, this-film-kicks-ass-but-much-else type feeling. But because it is so unsettling and unresolved it will last a lot longer in the history of film.

“And what the fuck do people want anyway? How many horror movies end with the killer still alive, primed for sequels 1 through 5? Well, by the end of this film our boy Javier Bardem is still on the loose. But isn’t that the point? Evil lives on in this world. It isn’t fair, or it is about as fair and arbitrary as a coin toss.

“This is one of those second-time-arounders. Once you know how it ends and you understand what role Tommy Lee Jones plays in the film, you go back and you listen to the script more. That’s when the end of this film will have a real punch. Gee, imagine that — a film worth seeing a second time! How many films work on that level?

“Did I want Josh Brolin to have the that like he did? No. Did I want him to engage in an awesome showdown with Javier at the end of the film? Hell yeah. In lieu of that, did I want Tommy Lee Jones to show up, Marge Gunderson-style, and pull Brolin’s wife out of the woodchipper in the nick of time? Most definitely. But that is what we get time and time again. And let’s face it, we’re never really happy with that.

“Actually, if you want the Hollywood ending — Tommy Lee Jones saves Josh’s wife, kills Bardem…or wait….we only think he’s killed him. It’s only in the last scene when the audience has received its tacked-on happy ending that Bardem shows up in some gas station or hotel and you know it isn’t over. So screw all of those who dislike the ending.”

A 30th anniversary, 3-disc, triple-dip Close Encounters of the Third Kind DVD came out on 11.13. It’s a Blade Runner package in that it has the original ’77 version, that awful extra-footage, inside-the-mother-ship version that came out in ’80, and the director’s cut that came out in ’98 or thereabouts. Reading about it reminded me to never, ever see this film again. 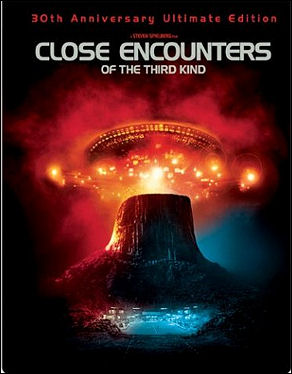 I’ll always love the opening seconds of Steven Spielberg‘s once-legendary film, which I saw on opening day at Manhattan’s Zeigfeld theatre on 11.16.77. (I wasn’t a journalist or even a New Yorker at that stage — I took the train in from Connecticut that morning.) I still get chills thinking about that black-screen silence as the main credits fade in and out — plainly but ominously. And then John Williams‘ organish space-music sounding faintly, and then a bit more…slowly building, louder and louder. And then that huge orchestral CRASH! at the exact split second that the screen turns the color of warm desert sand, and we’re in the Sonoran desert looking for those pristine WW II planes without the pilots.

That was probably Spielberg’s finest creative wow-stroke. He never delivered a more thrilling moment after that, and sometimes I think it may have been all downhill from then on, even during the unfolding of Close Encounters itself.

I saw it three times during the initial run, but when I saw it again on laser disc in the early ’90s I began to realize how consistently irritating and assaultive it is from beginning to end. There are so many moments that are either stylistically affected or irritating or impossible to swallow, I’m starting to conclude that there isn’t a single scene in that film that doesn’t offend in some way. I could write 100 pages on all the things that irk me about Close Encounters. I can’t watch it now without gritting my teeth. Everything about that film that seemed delightful or stunning or even breathtaking in ’77 (excepting those first few seconds and the mothership arrival at the end) now makes me want to jump out the window.

That stupid mechanical monkey with the cymbals. The way those little screws on the floor heating vent unscrew themselves. The way those Indian guys all point heavenward at the the exact same moment when they’re asked where the sounds came from. “Bahahahhahhree!” That idiotic invisible poison gas scare around Devil’s Tower. That awful actor playing that senior Army officer who denies it’s a charade. The way the electricity comes back on in Muncie, Indiana, at the same moment that those three small UFOs drones disappear in the heavens. The mule-like resistance of Teri Garr‘s character to believe even a little bit in Richard Dreyfuss‘s sightings. It’s one unlikely, implausible, baldly manipulative crap move after another.

If only Spielberg had the talent to blend his fertile imaginings with a semblance of half-believable realism…but he doesn’t. Or didn’t back then.

The worst element of all is the way Spielberg has those guys who are supposed to board the mother ship wearing the same red jumpsuits and sunglasses and acting like total robots. Why? No reason. Spielberg just liked the idea of them looking and acting that way. This is a prime example of why his considerable gifts don’t overcome the fact that he’s a hack. He knows how to get you but there’s never anything under the “get.”

The ending of No Country for Old Men is obviously irritating to some, but the thematic echoes and undercurrents from the last scene stay with you like some kind of sad back-porch symphony. Spielberg’s films have almost never accomplished anything close to this. I’m not sure they have even once. Has anyone tried watching the “little girl in red” scene in Schindler’s List lately? I love most of that 1993 film, but this scene gets a little bit worse every time.

Tomorrow’s “Labor Solidarity with Writers” march down Hollywood Boulevard is a must-attend. Good photos and sound ops. The westward march will start at 1 pm from the corner of Ivar and Hollywood Blvd., and end somewhere before La Brea.

David Sington‘s In the Shadow of the Moon (which Ron Howard lent his name to as a “present”-ing exec producer) is one of the most stirring “heart” docs I’ve seen all year. It’s a shame it didn’t make the short list of Best Feature Docs.

The Cloverfield 2 trailer (i.e., the one that preemed iin theatres last weekend in front of Beowulf) is up. Great stuff. No monster glimpses — just the old throaty Godzilla roar, lots of herky-jerky photography, lots of running around Manhattan. Helicopters, subway tunnels, walls collapsing…”what’s that?” Underneath the monster-movie trappings, producer J.J. Abrams isn’t trying to hide the fact that it’s basically a 9.11 revisiting. “Whatever it is, it’s winning.”

21 Comments
The “In Bruges” situation

In Bruges, the first film from British playwright Martin McDonagh (The Pillowman) with Colin Farrell, Brendan Gleeson and Ralph Fiennes, will open the ’08 Sundance Film Festival on 1.7.08 in good old overdeveloped Park City, Utah. I saw the trailer last weekend while watching a film at the new Arclight Cinemas in Sherman Oaks. You can tell it’s antsy, angular and a bit nuts — a crime story about a couple of boob-level London assassins who may be a target of a hit themselves while staying in Bruges, Belgium — with fast punchy dialogue. 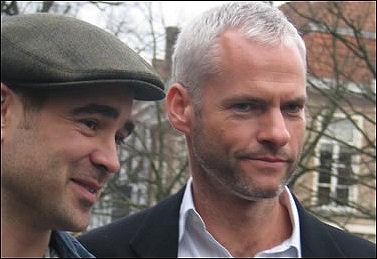 The only problem, of course, is the title, which 98% of U.S. moviegoers are going to go, “Huh?” I’ve been to northern Europe eight or nine times and even I didn’t know what “Bruges ” was unti llooking it up, and I’m still not 100% clear about how to pronounce it. McDonagh is said to be a feisty and forceful talent (he’s famed for having gotten into a tussle with Sean Connery at a London event 11 years ago, when he was 26), and he wouldn’t be successful if he listened to suggestions from journalists. But this title will do nothing to enhance business among the schmoes. At best it sounds like a James Ivory film. It would suck if the title was In Boston or In Providence, but In Bruges? Forget it.

The other thing I got from the trailer is that Farrell is starting to look a little too puffy and weather-beaten up for a 31 year-old guy. All those pints and fags will get to you after a while. He was a twentysomething pretty boy only two or three years ago, but right now he could pass for being 37 or 38. I know Farrell looks a bit older that his years in Woody Allen‘s Cassandra’s Dream. I realize that British and Irish guys aren’t known for aging all that well, but if he keeps up like this he’ll be a character actor by the time he’s 40.

213.net’s Jason Coleman has provided very precise descriptions of the nine (9) additions on the 162-minute Zodiac Directors Cut DVD (due January 8th), including (a) a scene with Detectives Toschi (Mark Ruffalo), Armstrong (Anthony Edwards) and Lee (Dermot Mulroney) speaking to a superior on a voice box about the details that make Arthur Leigh Allen a prime Zodiac suspect and (b) the famous black-screen sequence in which the passage of four years — from the early to mid ’70s — is conveyed with a sequence of songs and news stories from the period. The Paramount executive(s) who forced this sequence to be removed from the theatrical version should be brought up on charges.

Two Alec Baldwin thoughts via an 11.18 Huffington Post-ing: (1) “I saw Sean Penn‘s Into The Wild this weekend. Give Emile Hirsch the Jim Caviezel Award for the greatest suffering on film. I have not seen an actor put through this much in quite a while. Good job by Sean and Co.” and (2) “I miss my make-up artist, Stacey Panepinto. I miss my hairstylist, Richard Esposito. I miss all of the 30 Rock cast and crew, whom I don’t see anymore because of this motherfucking, motherfucking, motherfucking strike.”

23 Comments
Fat suit but no mobile

No clue when this Tom Cruise shot was taken or on what film set, but it seems to call into question his 11.12 statement that he has “no iPhone, no mobile.” 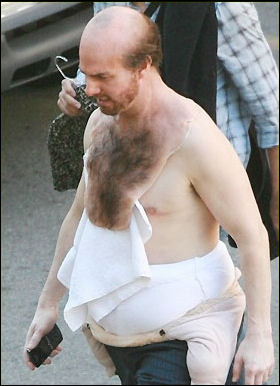 Walk Hard, Knocked Up and Superbad producer-writer Judd Apatow has told N.Y. Times media columnist David Carr that “the business model that is driving the studios’ hard line is a little backward. Digital or not, well-written content can be a lucrative business.

“One of the problems is a lack of creativity,” Apatow says. “The studios spend enormous amounts of money making these massive spectacles when they could be making much better written, lower-cost movies. A few less of those and they could fund a settlement for years. There would be no reason for this strike.”