“Money makes your life easier. If you’re lucky [enough] to have it, you’re lucky.” — Robert De Niro, quoted in the “What I’ve Learned” section on page 96 of the current Esquire (January 2008, Johnny Depp on the cover).

“People who tend to go after money as a solution for whatever they feel they lack had better be careful what they pray for, because they just may get it.” — Eric Clapton, quoted on page 95 in the same issue.

“In both novel and film form, The Kite Runner recounts a simple yet shrewd story about that favorite American pastime: self-improvement. [The lead character] Amir’s childhood mistake isn’t a careless juvenile offense; it’s a human stain that must be scrubbed out through self-abnegation, confession and personal transformation. 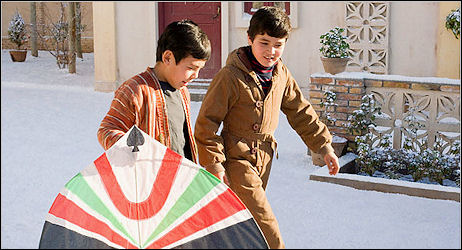 “Yet, watching this film, you are left to wonder whom precisely is all this suffering for — is it for Amir? Hassan? Afghanistan? Or do Hassan and the storyÃ¢â‚¬â„¢s other sad children — especially those hollow-eyed boys and girls glimpsed during the preposterous climax in Taliban-controlled Afghanistan — suffer because it’s possible to package other peopleÃ¢â‚¬â„¢s pain and turn it into a commercial diversion?

“ItÃ¢â‚¬â„¢s no surprise that for all its foreign trappings, The Kite Runner tells the same old comforting story. We wouldnÃ¢â‚¬â„¢t have it any other way.” — from Manohla Dargis‘s 12.14 N.Y. Times review — a stake in the heart of one of the better-liked “heart” movies of the awards season.

Belated congrats to Paramount Vantage chief John Lesher, one of the most Clark Kent-ish, most perceptive and least pretentious studio chiefs I’ve ever run into, for being appointed to the post of overall Paramount Motion Picture Group top dog & grand poobah. Nikki Finke‘s posting last Thursday says Lesher will be calling the creative and business-affairs shots for the general Paramount operation, including the film divisions of Paramount Vantage, MTV, Nickelodeon, Comedy Central and BET. Lesher will report directly to Paramount chairman Brad Grey. 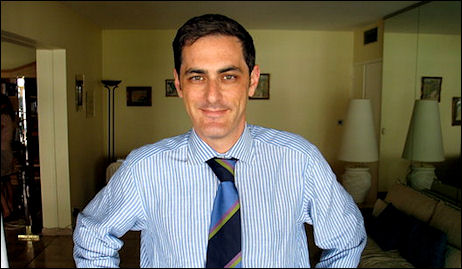 You can be smug and use terms like “stunning” or “sobering” to describe Daniel Day Lewis‘s fashion sense. What it’s about, really, is a kind of rural Irish attitude. I’ve been to social occasions in southwestern Ireland (in a town called Knocklong) and I have a recollection of what goes there. Plaid suits aren’t normal — they’re eccentric — but at the same time they don’t weird people out. I would personally lose it if I was at a party in which, say, 50 guys were dressed like this, but just one is fine. 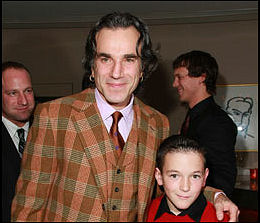 “I find it distressing that we now live in a film-culture climate where a number of very talented film critics find their column inches reduced or themseves out of work at publications that think nothing of devoting reams of print and/or online space to awards-season speculating — most of which, as I further point out, isn’t so much concerned with the quality of the awards-season films as whether or not they’ll be to the Academy’s liking.” — L.A. Weekly critic Scott Foundas in a 12.11 posting.

As I’ve said numerous times, trying to make shrewd calls about likely Oscar contenders while knowing in my film-worshipping heart of hearts that many of the year’s real champs in terms of quality are being completely ignored by the Academy prognostication crew is…agonizing. Agonizing to watch this process in slow motion, I mean. A voice from deep in my chest says to me over and over, “You have to do this differently somehow because the usual-usual is wrong…the Academy decisions about some matters (like foreign-film qualification) are sometimes woefully ignorant and small-minded…you need to do what you can to try and lessen the noise and cut through the crap.”

But I’m trying to speak up for the right movies, at least. At least I’m not writing how wonderful and heaven-sent Amy Adams is in Enchanted — she’s very fetching and spirited but c’mon, calm down. Or how sublime George Clooney is in Michael Clayton. He gives a very noble and well-cut performance in a very well-crafted and 90% satisfying film, but is it right and proportionate to call it the stuff of legend?

This is a gig, a passion, a racket, a calling…and the advertising money that stems from the mythology of Oscar prognostication is very nice. Essential, I mean to say. I don’t know what else to say. It’ll be great, at least, to see at least some recognition for the right people and the right movies next February.”

Two days ago I was told that I Am Legend would make $44 or $45 million for the weekend. The 12.14 release date, I was told, would be a bit of an issue. If it wasn’t opening in the Thanksgiving-to-Xmas dead zone (i.e., a period when people pass up films in order to save money for Xmas gifts and preparing feasts for the in-laws), it would make a lot more. Plus the northeastern snowfalls would slow it down a tad. All hooey, it turned out. The big-canvas Will Smith sci-fi drama earned $28 million yesterday and is looking to nudge $70 million by Sunday night.

The weekend’s #2 film is Alvin & the Chipmunks (20th Century Fox) did close to $13 million yesterday. The Saturday box-office surge that family-audience movies always benefit from should kick in, and it should end up with at least $35 million by tomorrow night. I saw the trailer a while ago and was flat-out horrified. I won’t see this film under any circumstances, ever. I wouldn’t watch it with a loaded gun pointed at my head. “Go ahead…shoot!” I would calmly reply. “I regret that I have only one life to give in the cause of renouncing insipid family movies.”

The Golden Compass made roughly $3 million yesterday and is looking at $10 million for the weekend. The projected haul will mean a 60% drop from last weekend, give or take. The Golden Lion of the Rings & the Wardrobe & the Order of the Magical Polar Bear is dead, dead…deader than dead. If this were Japan, certain New Line executives would be getting out their samurai swords in preparation for ritual seppuku.