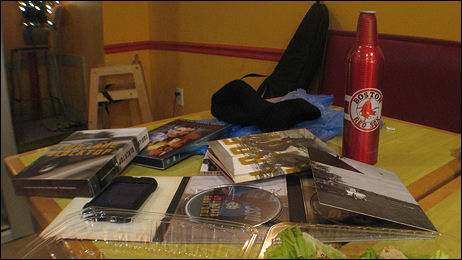 Here’s a testy little spat between The Envelope‘s Tom O’Neil and Oscar show producer Gil Cates about the possible effects of the WGA strike upon the late January Golden Globes awards and the 2.24.08 Oscar show.
“Awards shows are the best chance that writers have to prove how valuable they are,” O’Neil said in a 12.18 AP story. “Without a script, we may finally find out how vapid and empty these stars really are. The awards shows will have no choice but to go on with the show, but not the telecast.”
“That’s totally ridiculous!,” Cates replied in the same damn story. “There will absolutely be a (televised) show one way or another. There are awards to give out.” And miles to go before I sleep!
O’Neil has pointed to the radical change being planned by the January 8th Peoples’ Choice Awards, which “will present a show that the nominees and winners don’t have to attend with winners being taped ahead of time at remote locations. There will be no red carpet and arrivals. And no suspense about who wins. But there’s never been any suspense surrounding who claims the Peoples’ Choice Awards. Winners have always been tipped off ahead of time.
“Thus, it’s not a suspense-driven awards show like the Oscars, Golden Globes, Grammys and Emmys. So such a retooled show is probably not an option for the other kudos.”
O’Neil also reminds that 30 Rock writer Brett Baer said in the same AP article that the guild is aiming specifically at kudos shows, saying, ‘If we could shut down the awards shows, that would be great.’
“Mr. Cates, why do you think the Oscars will be different?”

Of all the Xmas presidential front-runner ads, I have to admit that Hilary Clinton‘s is a tiny bit craftier — idea, production values, acting (i.e., lines that don’t demand too much emoting), no “C” word — than Barack Obama‘s, although Barack’s is certainly warmer and more comforting.

“There’s this whole school of thought that movies are always so great when you’re 10 or 12 years old, and the reality of it is, when you’re 10 or 12 years old, you’ve only seen 100 stories. By the time you get to be 25, you’ve seen 3,000. You’ve seen every permutation of every dramatic arc. And when somebody takes that and stands it on its head, that can be exciting.” — Zodiac director David Fincher to Variety‘s Justin Chang.

“Lynne Spears‘ book about parenting has been delayed indefinitely, her publisher said Wednesday. Lindsey Nobles, a spokeswoman for Christian book publisher Thomas Nelson Inc., said that the memoir by the mother of Britney Spears was put on hold last week. She declined to comment on whether the delay was connected to the revelation that Spears’ 16-year-old daughter, Jamie Lynn, is pregnant.”

It’s comforting to read that New York‘s “Vulture” column shares at least some of my advance loathing for Peter Jackson‘s two Hobbit movies (“So, uh, great — the sequel’s going to be some Silmarillion- inspired filler crap, like all those scenes of Aragorn and Arwen pitching woo at each other, except not written by Jackson? Count us out.”) And also that they’ve picked up on my thought about Juno‘s Oscar chances possibly being affected by the real-life pregnancy of 16 year-old Jamie Lynn Spears and…uhm, Lily Allen.

I’ve noticed an interesting difference between a late work-print version of Denzel Washington‘s The Great Debaters that I saw a few weeks ago and the release- print version that I saw last night at Harvard University. It’s a big change regarding the fate of Nate Parker‘s Henry Lowe character — the most charismatic and gifted Wiley College debater, although one with an occasional weakness for booze and women. 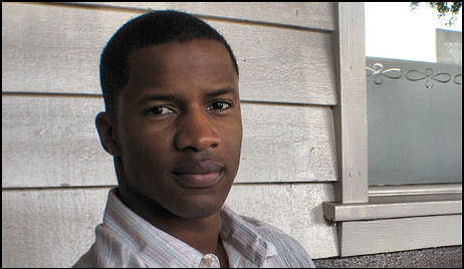 Nate Parker, snapped during a West Hollywood HE interview in late November

In the work-print version of the epilogue crawl (i.e., the what-happened-to-the- characters info that fact-based dramas often supply), it said that after graduating Lowe simply disappeared — an indication that he may have succumbed to his addictions, etc. It seemed like an interesting call since inspirational films usually pass along uplifting information, blah blah. Lowe is a composite character (i.e., not based on a specific real-life figure) so Washington was free to write any fate he chose. Saying that Lowe didn’t build upon the potential of his early life was, at the very least, against the grain and admirable for that.
But this dark-fate decision, apparently, didn’t go down with research audiences. In the final-release version, it is said that Lowe went into the ministry — an obvious hint that he turned to God and the cloth as a way of controlling his demons. A more upbeat and positive fate, yes, but an indication of a certain artistic flexibility on Washington’s part. This is a small thing I’m mentioning. The Great Debaters is still sharply written, forthright, not sappy, well-shaped. It’s “commercial” and likely to catch on. (Probably.) It’s just that conveying Lowe’s downbeat fate added an interesting counter-shade.
The good-looking Parker gives the most vivid performance in The Great Debaters. He comes off as confident, centered…settled into himself. The guy most likely to get a bounce off this film, I’m betting.
The only real-life, history-based debater in the film is James Farmer, Jr. (Denzel Whitaker), who went on in real life to found the Congress of Racial Equality and become a major civil-rights movement leader.

Tom Hanks was on Regis and Kelly this morning, plugging Charlie Wilson’s War. At some point during the shpiel he mentioned his My Space page, and how he’s often (or at least occasionally) zinged by readers with “screw you, dirtbag” or “eat my ass, Tom” or thoughts along these lines. A friend who saw the segment said that Hanks then said, in cleaned-up TV talk show-ese, “You know what? Fuck these people.” This was the gist, apparently. Maybe the episode will turn up on YouTube.

There is nothing in the least bit inappropriate or off-putting in the way Juno screenwriter Diablo Cody has promoted herself. She’s not doing anything Quentin Tarantino didn’t do (or try to do) 13, 14, 15 years ago. “I’m not just a writer but a smart-ass character/celebrity who knows about getting attention and working the town every which way”…no big deal & totally par for the course by 21st Century hype standards. You have to synch with the ongoing scale and velocity of things as they are, not as you might want them to be. 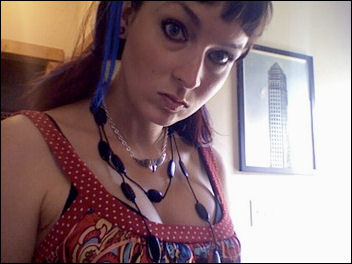 It therefore seems to me as if L.A. Times columnist Mark Olsen is exaggerating by saying Juno‘s rep may be in jeopardy because of the Cody hype “overwhelming its very genuine strengths.” He’s also noted that “more than one internet wag has wondered if Cody’s new gig as roving columnist for Entertainment Weekly will be her Norbit-style Waterloo.” Bullshit…the analogy isn’t there.
That said, if you’re taping a talk show it’s impolite not to turn your cell phone off. I’m not saying any more than this.

Scriptland columnist Jay Fernandez has passed along one of the best explanations or theories about why there’s so little understanding and commnication between WGA negotiators and those repping the studios and producers. The latter, he’s saying, are basically a “different race” who have nothing in common with the creative community because they’re basically corporate pod people.
In other words, Fernandez has drawn posted an interesting analogy between the mentality of producer/suit strike negotiators and the “condescending paternalism of the Bush administration…a business and political culture that increasingly seeks to disenfranchise [writers] from having a say in huge decisions about their industry’s future, and thus a measure of control over their own professional identities and livelihoods.
“‘Trust us,’ the companies seem to be saying in a dismissive echo of Bush policy, ‘we know what’s best for you.’
“As one producer with a studio deal joked, Louis B. Mayer and Harry Cohn famously treated the writers like bothersome children too, but at least they were children from the same family. These days, vertical integration has forced a mercenary corporate culture down through the very human ranks of studios and networks that used to be filled with actual movie and TV lovers.
“Now it’s as if the top executive ranks are a different race — brutal bean counters, not simpatico cinema dreamers — who don’t even know how to speak to their creative personnel, let alone make decisions based on their sense of fairness.” 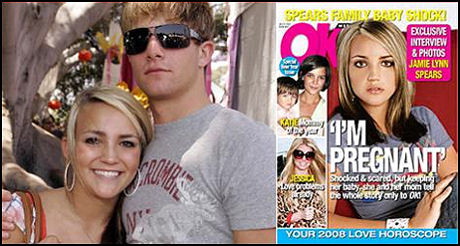 The Set List, edited by Variety associate editor Phil Gallo, announced yesterday that Apple has posted the first trailer for Martin Scorsese‘s Shine a Light (Paramount, 4.8.08), the delayed Rolling Stones concert doc. This trailer was up last August, guys. I posted an item about it on 8.25. 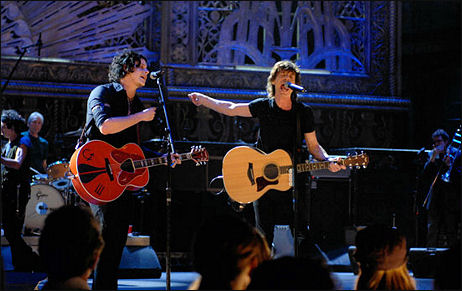